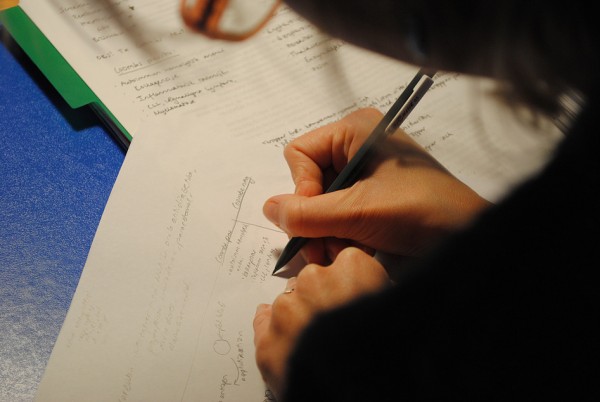 Help, My Teens Refuse to Study!

Mir, I’m hoping you have some ideas for me, because I’m starting to feel like I’m losing my mind. My twins are nearing the end of their freshman year of high school. Everyone warned us about the transition to high school being a difficult one—and I had the added bonus of some people insisting it would be much worse for girls—and to our delight, both girls managed the switch without any problems or drama. They’ve joined clubs, have friends both new and old, and have mostly maintained their good grades.

But (you knew there was a “but” coming): It’s becoming clear that neither one of them has any idea how to study. Worse, it’s becoming clear that neither one of them wants to learn to study. Everything is “fine” and “I’ve got this” and “Mom, you’re overreacting.” School has always been easy for them. They’re very bright (classified as “gifted,” etc.), and if given an assignment, they put in the necessary work (though not much more than that, I suspect). Their natural aptitude and excellent memories have thus far meant this is enough—usually. What I’ve seen this year is a slow decline in major test grades in their more challenging classes. The work is harder now and the bare minimum is not enough to keep their averages up. And because their grades are still “fine” (low As rather than high As, or low-to-mid-Bs in AP classes where their final grades will get a 10-point bump at the end of the year), they’re unconcerned because “Relax, it’s all As, geez,” and they think I’m harping on grades. It’s not about grades; it’s about the fact that classes are only going to keep getting harder and they seem completely baffled by and unwilling to just sit down and study before tests. I think they see it as something only “dumb” kids have to do, no matter how I try to explain that even very smart people have to study to continue mastering course content.

How do I help them to understand that studying is a normal part of school at this level (and beyond) and not a sign of weakness? How do I break it down for them and get buy-in? Nothing I say or do seems to sway them. And while I’m really not worried about their grades right now (though talk to me after finals…), I know that if they can’t develop good study habits soon, some nasty surprises await them down the road.

Have you been in my house? No, really, are you spying on my family?

The bad news is that—as you’ve already surmised—you cannot force your kids to study, not really. I mean, you could legislate time spent at the kitchen table with their books and notes, but they’ll be annoyed and you’ll be frustrated and in the end they haven’t internalized any of the self-motivation that’s really at the core of the changes you’re hoping to see. And I’m not going to sugar-coat this: one or both of them may never change their tune until they truly bomb an exam. If and when that happens… it’s not going to be pretty. But it’s also not going to be the end of the world, whether it happens next month or not until their first year of college. Just know that may be how it goes down, and grit your teeth and choke back the “I told you so” and let it unfold as a learning experience, when it happens.

So what you can do right now, given that you can’t force them to study the way you want them them to? You can (gently) encourage them to take small steps in the right direction. For example: studies have proven that memory consolidation happens during sleep, so you are always better off studying the night before an exam than getting up early and studying the morning of the exam. Maybe your girls are doing neither, but with some casual prodding perhaps you can suggest they institute 10 or 20 or 30 minutes of looking over their notes/textbook last thing before they go to sleep at night when there’s a test the next day. It’s a baby step, for sure, but if you can get them to do that and they start seeing the difference it makes, they more be more amenable to larger changes.

If they share a class, perhaps challenge them to each come up with 10 review questions for the other one in an attempt to stump one another. There’s learning happening in coming up with the questions, as well as in trying to answer the other 10. If there’s some sort of teacher-provided study guide in the mix (or if it’s an AP class, we are big fans of the 5 Steps to a 5 series of books), ask them to spend 10 minutes with it each night. 10 minutes! That’s nothing! As they form better habits, a positive feedback loop will start to establish itself. 10 minutes will turn into 20, and that will turn into 30, and so on.

I can tell you from my own experience that neither of my two special snowflakes had any idea how to study when they got to high school, nor did they think there was any reason to learn. And yes, there have been some spectacular failures involved in penetrating that hubris, and a lot of associated teeth-gnashing. My graduating senior now knows what she needs to do to learn and retain information, and will spend as much time as she needs, unprompted, to master material. I say that not to brag, but so that I can also say that I thought we’d never see this day, but she figured it out. Take heart! My rising senior, on the other hand, is still very resistant to studying, but starting to come around as long as it doesn’t involve long stretches of time. With him it’s all about “chunking”—20 minutes with a book, 10 minute break, etc. He’s still getting there.

You cannot make this process happen. You can encourage. You can assist, if they’re amenable to that. You can work on your non-judgmental poker face so that when the *splat* happens, you can comfort and nod and agree that that’s disappointing, yes, and wonder aloud if there’s something to be learned here about what to do differently in the future. And of course you can continue to institute whatever your reasonable house rules are about grades and leisure time (while you can’t force a kid to study, a kid who doesn’t study and bombs a big exam is probably going to be grounded until that grade’s brought up, in most homes), in the meantime. In all likelihood, your girls will figure it out… just maybe not as soon as you’d like. Hang in there.