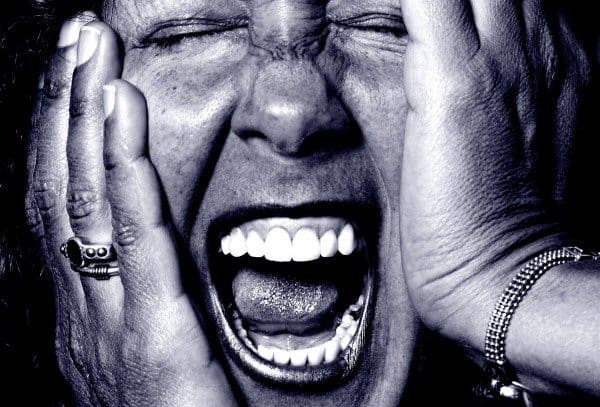 Recovering From a Terrible, Horrible, No Good Very Bad Morning

I’d planned a piece about Halloween, today. ‘Tis the season, y’know? But instead, I had one of those awful mornings with my family where I feel like I need to do penance.

Last night I had a lively chat on the phone with my father, and he commented—for not the first time—that I appear to be holding up well under a tremendous amount of stress. This made me laugh (it always does), and I said, “You know the saying about how God doesn’t give you more than you can handle? That’s crap.” We chuckled and the conversation moved on; I suppose that most of the time it really does look like I’m handling life with a modicum of grace. And most of the time, we don’t talk about the time when it doesn’t.

Well, today was one of the days when it didn’t.

I wouldn’t say that I “struggled” this morning so much as I “melted down and had a spectacular tantrum.” Go, me! All of the stuff I wrote about continuing to parent through depression is still true, and it’s still the standard to which I aspire. Most of the time, I manage it. Most of the time, I think I’m able to give my children the best parts of me even when it feels like I have to claw my way through the dark to do it.

Sometimes, I’m in the middle of switching medications and I feel raw and wobbly. Sometimes I’m relieved to be off the old medication (which made my brain feel fuzzy and left me lethargic), but it turns out that the new med makes my stomach hurt all the time. Sometimes, my homeschooler keeps forgetting to hand in work for his virtual classes the same week where I find out that public funds are no longer available to pay for said classes, so we’re about to shoulder an additional financial burden so that said child can get some more zeros for work he can’t seem to manage to turn in. Sometimes my public schooler needs two different Halloween costumes for school this week (because one has to be fun! and one has to be history-related for class extra credit!) and only figures this out on Monday morning. Sometimes neither child remembers to empty their lunch boxes and leave them on the kitchen counter, and when I retrieve said boxes and empty them, I find a ton of unconsumed, now-wasted food. Sometimes I have a lot of work I need to get done but the kids have appointments and need rides and it feels like my husband gets to take care of all of his “stuff” as he pleases while I have to take care of the stuff of three people, putting two of those people ahead of myself. [Note: My husband is a saint. That’s the depression talking, and I know it.] Sometimes my husband leaves for work without putting the coffee on (arguably the hardest-to-deal-with issue on this list).

This morning, it wasn’t okay. I started off trying to talk to one child about a difficult issue in a reasonable manner, but this provoked an angry reaction, and the next thing I knew, we were yelling at each other. The other child walked into the middle of this wanting something else, and when I tried to say, “This would be a good time to just go take care of your own stuff and not get involved,” somehow that turned into cries of “Why are you so mad at me, I didn’t do anything!”

Things spiraled out of control from there. In very short order, all three of us were crying and my husband had worried eyebrows (as well as a desire to Fix It, but unsureness about where to start).

I took a break, then went back to talk to the kids, and tried all of my standard “I’m sorry I behaved badly, I am just frustrated about these things” sorts of mature and logical communication. One of my children, true to standard form, was sad and apologetic, immediately. But the other child—I don’t want to brag, but I’m pretty sure this kid is the reigning world champion in grudge-holding and persecution—was angry and disrespectful, and I found myself yelling (again!) about how I am trying, here, and you don’t get to talk to me that way, and no, the irony of raising my own voice to deliver that message is not lost on me.

On a later, third pass, to try to right this with the angry child, tempers flared yet again, and I ended up stomping out to our porch and just sitting out there in the cold, crying, trying to pull myself together. My husband came out to talk to me, and all I could manage was some disjointed whining about how I am never allowed to have feelings or be upset about anything, and I am always taking care of everyone else but heaven forbid I need a little extra care, myself, and how come I can put up with a hundred instances of Children Behaving Badly and be patient and loving and endure things I most assuredly had no idea lay ahead of me when I was a new mother, and no one ever says thank you for that, but the one time I don’t manage to be my best self, well, it’s like I’m the very worst mother in the whole world, because I am simply not allowed to struggle. It’s not fair.

To his credit, my husband let me rant. He hugged me and brought me inside and reassured me that I’m not a terrible mother and we will get through this.

I don’t know if he’s right, but I do know that someone was playing with my phone this weekend, and thanks to the miracle of technology, I think we patched things up, and I got a bonus chuckle. Meet my vegetarian child, Pork Rind: 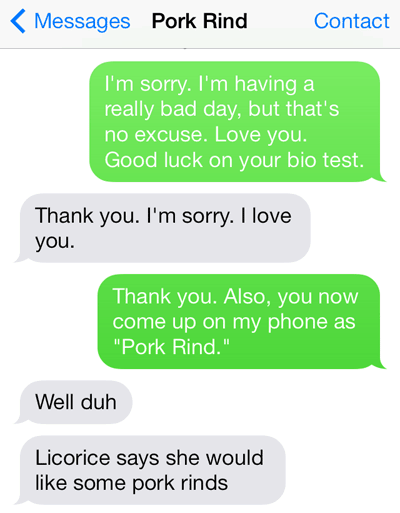 Onward. (Even though I have no idea what’s up with the whole Pork Rind thing.)