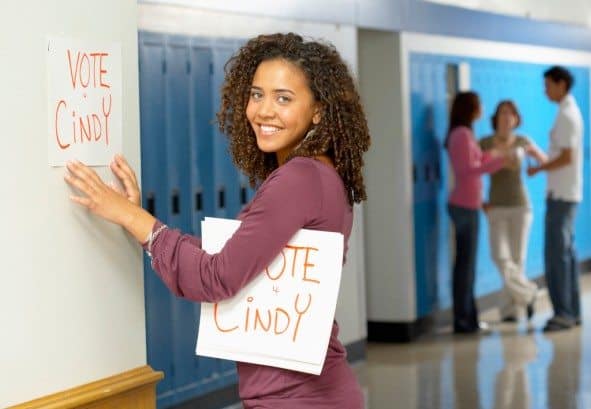 It is inevitable. We all face disappointments in our lives, many times out of our direct control. How we handle those disappointments is up to us. Teaching our children to weather setbacks and failures is one of the more important jobs we face as parents. And after parenting for nearly nineteen years I can tell you, this never gets easier.  The disappointments change, but seeing your child upset never does.

My ten-year-old daughter recently ran for Student Council president. She worked so hard on her speech and posters. She thought long and hard about what her platform would be and was careful not to promise things that she didn’t actually have the power or authority to change- even though her brother told her she should promise extra long recess and candy in the cafeteria. She was the only girl who ran for president and when we had discussed the options for other offices she scoffed, “I want to be president or nothing.”  Go big or go home is her life motto.  We high-fived all around. She possesses a level of self-confidence that I never had at her age.  She is strong, assertive, brave, kind, and wonderful… who wouldn’t vote for her?

To make a long story short, she didn’t win the election. She was crushed with disappointment. As she cried in the car about how all her hard work seemed like a big waste of time, I realized that this was a huge teaching opportunity. This was her first major disappointment and she needed to learn the skills to face these situations in her life. As much as I wish that she would never again be disappointed, I know that it will happen over and over again in her life. The way she choses to react to setbacks and disappointments will shape the course of her life.

How do you help your children deal with the inevitable disappointments that life will hand them?

Acknowledge how much they wanted the thing they didn’t get. Whether it was enough votes in an election or a coveted party invitation.

Don’t try to minimize their feelings

This includes saying things like, “It’s not that big of a deal.” “It’s not the end of the world.” “Don’t be so upset.” Don’t say these things. Because to them, it likely is their world. Sometimes it is difficult to remember that school and their peer group is everything to kids. Usually when I find words like these coming out of my mouth it isn’t because I want to minimize my child’s feelings, but rather because it is painful for me to watch them hurt.

Disappointments can be viewed as opportunities

A so-called friend who doesn’t invite you to a party, really isn’t a friend. Use this as an opportunity to help your child find a new group of friends. I know this isn’t easy the older your children get, but sometimes you can help them rekindle past friendships, or sign them up for a class or lesson where they will meet new people. Even invite some new friends over for a pizza and movie party. Anything that makes your child feel like they are less alone. There are lots of people in this world, teach them that they do not have to pine for friends who don’t treat them nicely.

Point out the positives

Sometimes this is not easy, I mean what is positive about not being invited to the birthday party other than realizing your friend is really a big jerk, which still is only positive in retrospect? But in the case of my daughter running for president, I told her (again) how proud I was of her. How brave I thought it was to get up in front of the entire school and make a speech. How some people never go for the things that they really desire because they are too afraid to be vulnerable, so afraid to fail that they don’t even try. That is even sadder than occasionally being disappointed.

When you are faced with your own disappointments in life, do you wallow in self-pity? Blame other people? Stomp around and slam things? Being upset, angry, and hurt is normal and a natural reaction to life’s disappointments, but make sure your children see how you get past those feelings. Make sure they see how you move on. Remember your children are watching you for cues on how to navigate this world, like it or not they will imitate what they see you do.

Get ready for the next time

What did your child learn from this disappointment that will be useful in the future? Thomas Edison is reported to have said that he didn’t have any failures while trying to invent the lightbulb, he just found 10,000 things that didn’t work.

When Monday rolled around and my daughter went back to school, she had mostly gotten over her disappointment. Sure it still stung around the edges, but the tears and anger were gone. She discovered that her friends rallied around her in the classroom and assured her THEY felt she should have won. She didn’t hide her disappointment or pretend that she didn’t really care. Knowing that your close friends have your back and support you is priceless. That was the positive she took away from the experience.

She is already thinking about her next adventure.