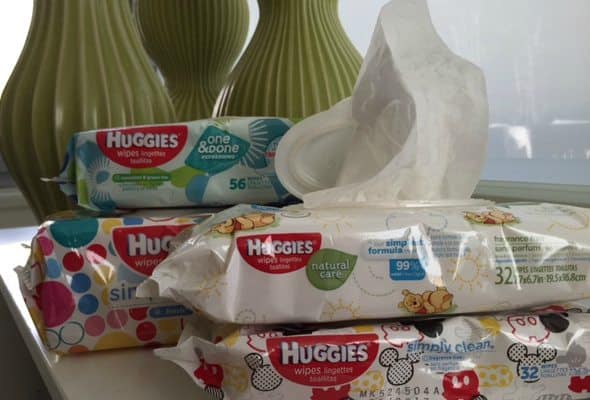 We don’t usually write about news stories here, but since Alpha Mom has partnered with Huggies for the past few months and has been writing about its products I felt it was important and necessary to discuss news and clarify misinformation that still might be out there about its baby wipes. I wasn’t asked to write about this; I wanted to.

In short, in late August a Facebook video went viral of a mom in California alerting her friends to what she thought were glass shards she found in her package of Huggies baby wipes (conclusion: there was no glass). While the package was being retrieved from the mom by Huggies and independently tested, the video continued to garner massive views (in the millions), other parents started posting about what they thought were glass shards in their Huggies baby wipes (it looked like shimmers on the wet baby wipes), and the viral video itself turned into news, being picked up by the mainstream press.  The original video was posted on a Thursday and by Sunday a third party independent lab had confirmed that no glass was found in the Huggies baby wipes used in that original video (or any other package that was subsequently sent back by consumers).  But by then there was a lot of consumer concern and confusion.

In the scheme of parenting decisions, I don’t usually rank choosing baby wipes as high stakes. Bear with me here.  As it is, parenting is already a top priority for me.  But, within that realm of priorities, making decisions about issues like diet, allergies, vaccines and education take up a lot more of my mental  bandwidth than baby wipes ever have.  But, that’s only the case because I trust that well-respected consumer companies like Huggies, especially ones that make products for children, have excellent manufacturing standards.

When my son was a baby, perhaps wipes only touched my baby’s bottom for a few seconds, but I allowed that to happen because I knew that those wipes were safe (they’re actually FDA-regulated), soft, and effective. If I ever have any suspicions that a product my child uses is anything but that — let alone super dangerous —  it would set off a response in my sympathetic nervous system immediately.

When I saw the viral video in question on that Saturday I reached out to Huggies’ representatives to get clarification for readers. By then, Huggies had come out with a statement publicly of no glass in its manufacturing process and that was soon followed by a statement that the conclusion that tests proved both empirically and independently that nothing was found in the Huggies wipes.  In the days following, Huggies also collected and tested baby wipes from many consumer claiming that they too saw glass-like-particles or shimmers on their baby wipes.  Same results: nothing out of the ordinary found.  The FDA also visited the plant where the baby wipes are manufactured (it’s based in Arkansas), less than a week after the initial video was posted– all good.

You didn’t hear much after that in the news or on social media because everything was fine.  That’s how the misinformation news cycle works.  The initial news breaking story always gets a lot more attention than the follow-up one that denies or clarifies it.  If things had been bad, trust me you would have continued to hear about Huggies but not in a good way.  The press and media have what I call a “concern bias” wherein they want to warn you about potential hazards.  In fact, it was clear that the mom who posted the original video did it because she was an honestly concerned citizen.  She wanted to alert her friends and family to any potential dangers in the wipes.  Once she realized the wipes were safe, she apologized and took down the video.

So, what did the mom in California find and see on her baby wipes?

Huggies invited me along with a number of others who run parenting websites and groups to join them at a Huggies Parents Council roundtable to talk about that plus more.  We met with the head of Huggies North America,  Huggies chemical engineers behind safety and manufacturing, as well as a scientist from the independent testing agency (they test products of FDA-regulated companies) that examined the original wipes in question, among others.

They explained the series of events and timeline, including obtaining the original wipes through a proper chain of custody.  Then they passed the original wipes around to us visitors.  I regret not taking a photo of me examining and wiping my own hands and forearms completely with a set of wipes from the original package so that I could share the photo here with you.

Suffice it to say that I didn’t see anything on the wipes that resembled glimmer (or even close to glass shards) nor did I feel anything different from any other set of wipes I’ve ever touched.  However, other parents at the roundtable could see “shine” gleaming off the wipes they pulled from the packaging.  Hours later my forearms were still fine and without any sort or irritation or reaction (I washed my hands right after I used the wipes).

So, getting back to the original question, what did the Californian mother see shining on her Huggies baby wipes that to her naked eye resembled glass shards?  I learned baby wipes are manufactured by spinning cellulose fiber (soft and naturally-derived fibers from tree pulp) and polypropylene (long strand of microfiber) together with air and then layered together to form a sheet.  See the diagram above.

Then mostly water (and a touch of formulation to clean baby’s bottom) is added. When the fibers stick to each other they can shimmer in the reflection of the wet wipe.  On the viral video, a “flake” was also lifted off the wipe which led to the accusation of it being a glass shard.  I personally really grilled the team on that.  The Independent Testing Scientist said to me that it was a “flake of polypropylene” (or fiber).  I liken it to a a flake of dry skin.  Apparently when you seal and layer the wipes during the manufacturing process that can happen.  Bottom line is: nothing was wrong and if something had been wrong, a recall would have happened immediatley. You should also know that every single package of baby wipes is checked before it leaves the manufacturer.

Well, I never thought I would know or write this much about baby wipes, but I’ve learned that parenting is full of surprises.