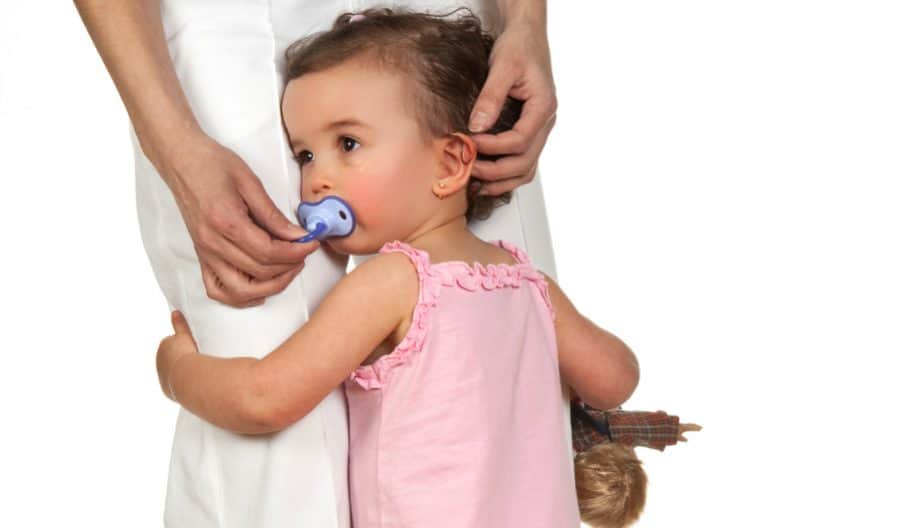 Hello, I’m writing because I’m absolutely desperate for help. My youngest has been an extremely high needs baby, right from the get go. Her extreme separation anxiety started at 6 weeks old (I wish I was kidding, I’ve never seen anything like it) where she would scream and scream and scream if anyone but me held her…. including her father. She refused a bottle so I couldn’t go out. All the advice I got was “oh she’ll drink it if she’s hungry enough”. Yeah right! At 3 months old she went 7 hours without a drop of milk while I was having a surgical procedure.

She’ll be 2 years old in 2 weeks and things have gotten a lot better in most areas, especially sleep. Until recently. I went on a 5 day vacation leaving her with her dad, and then a few weeks after I got back suddenly bedtime is a disaster. She will literally kick and hit and scream for upwards of an hour if anyone but me attempts to put her to bed, but if I come in she will calm right down.

Bath time is also a nightmare and that has gotten worse over time instead of improving . She’ll stand in the tub and just scream and scream and say over and over “I all done! I don’t like it!”.

If I leave her with a babysitter she loses her mind for hours on end.

It’s gotten to the point where my doctor ordered bloodwork to rule out any underlying issues, all normal. ASD has also been ruled out and we’ve experimented with all sorts of different nap/bedtimes.

How can I alleviate such extreme anxiety? Or do I just have an insanely clingy and sensitive kid on my hands? I’m exhausted!

Any advice you have would be greatly appreciated!
Signed, tired and desperate!

So I write all of this with the usual caveat that I am not a doctor or a recognized/qualified expert in this topic, but having dealt with various early childhood issues with anxiety/atypical development, I’m going with my gut here and want to suggest you take your daughter for further evaluation, preferably by a child psychologist who specializes in anxiety in very young children. Because this just isn’t reading as “typical” separation anxiety.

My favorite book on anxiety in children (Tamar Chansky’s Freeing Your Child From Anxiety) doesn’t really talk about children as young as your daughter (most of the anecdotes and strategies are geared at preschool and up), but it goes cover separation anxiety and its more serious, pervasive form of Separation Anxiety Disorder (SAD). Children with SAD, as Chansky explains it, “rather than building confidence with successive separations, experience each separation as a crisis.” They simply do not feel safe without their parents (and often even a single preferred parent), and when they are separated, they experience genuine terror and distress. The babysitter is a dangerous stranger keeping me from Mommy, bedtime is saying goodbye FOREVER, danger danger Will Robinson, etc. As these separation-as-crises build and repeat, rather than eventually making the usual “Mommy goes away and Mommy comes back” connection, there’s a glitch, and the child eventually becomes consumed with worry over separations that haven’t even happened yet.

Thus, kids with SAD have a more-terrible-than-usual time separating for preschool or babysitters, and sleeping alone in their own bed is also a nightly exercise in terror. They’re more than just “clingy,” because in their minds they are literally clinging for dear life.

Again, ALL OF THESE fears and anxieties can exist at a “normal,” developmentally appropriate level. Lots of toddlers go through a preferred parent phase and cry when Mommy drops them off at Grandma’s house and HELL YES, they will fight and cling at bedtime as if their life depended on it…all without it rising to the SAD or intervention-needed level.

But what you’re describing sounds like a child who has lived with a very severe form of separation anxiety for almost her entire life with little improvement, and lots of backtracking whenever there’s an extended but necessary separation. The endless screaming and fight-or-flight responses, the not eating for seven hours at three months old, the “loses her mind for hours on end” — these are red flags to me that her fears go beyond what would be considered “typical.” The bathtime panic might not seem directly tied to the separation anxiety, but sounds an awful lot like a very sensitive child who is genuinely terrified of Bad Things Happening. (And according to Chansky, children with SAD often will go on to develop other anxiety or panic disorders later in life, because they’re living with such constant fear that their parent will leave/get sick/die, and thus never really experience feeling safe.)

And okay, stopping now to once again add that I AM NOT and CAN NOT diagnose a child over the Internet based on a few short paragraphs. And I don’t want you to start panicking over panic and jumping to worst-case scenarios — anxiety, at any level, is a completely treatable thing!! And just like any developmental quirk in early childhood, the earlier the intervention, the better. So please, get her evaluated by someone who specializes in this stuff ASAP. And since this has been a noted issue since six weeks of age, don’t let anyone just write your concerns off because of her age now, telling you that she’ll still just “grow out of it” or something — push if you have to, advocate the hell out of the situation.

(I also want to add that “ruling out” — or even diagnosing, except in the more severe cases — ASD before two years old is…not always going to be really accurate. That gets a touch of side-eye from me, TBH. My high-functioning ASD kid has been in Early Intervention since your daughter’s age and didn’t get the official Spectrum diagnosis until he was almost 8. Based on your letter my gut is definitely leaning more on the anxiety disorder spectrum than the Autism version; just tossing this out there to suggest that maybe you take her elsewhere for further evaluations because this stuff just isn’t that cut-and-dry at this super young age.)

A good psychologist or therapist will understand what’s going on in your daughter’s brain and help you “rewire” it together, helping her feel safe and make the necessary connection of “Mommy goes away and Mommy comes back and NOTHING BAD IS HAPPENING TO ME” that she’s not yet making on her own. They’ll help you forge (in time) successful separations that aren’t full-on physiological crises for her, and help her form positive connections to adults that aren’t you. And they’ll help you navigate other anxiety triggers, like bedtime and bathtime, in a more knowledgeable, hands-on way than some stranger on the Internet.

As an adult who has struggled with GAD (Generalized Anxiety Disorder) on and off throughout life, I promise you this is a treatable thing that can be conquered with a little help. And no matter what the diagnosis or reason behind your daughter’s ongoing anxiety, you will never regret getting that little bit of help as early on as you can.