Twitter Facebook Pin It Email Article
Prev Spaghetti and Meatballs (Meals Kids Should Know How to Cook Before Leaving Home) Next College is Looming, But Will We Kill Each Other First? 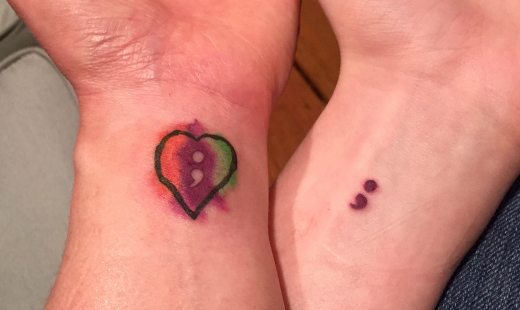 When I was a teenager, I wanted a second hole in my left earlobe. I cannot remember, now, why that was so important to me (or why it was just the one, except I think it was the style to have an extra on just one side), but as I had not even been allowed to get “regular” ear-piercing done until I turned 14, a second hole was absolutely out of the question. It wasn’t proper, and I was too young, and no.

Being young and stupid, one day when I was 15 or 16, I was fooling around with an earring in the bathroom, wondering how much pressure it would actually take to shove it through my earlobe. And then… I shoved it through my earlobe. I immediately panicked (Mom is going to kill me…) and pulled it back out, but then—now that I had, you know, a puncture wound—it bled so much, I shoved the earring back in and decided to take my chances. My mother did not kill me, and (surprisingly) I didn’t die of tetanus or other infection. When I turned 18, I went out and got a third piercing on that earlobe, as well.

I tell you this to illustrate that the full extent of my “wildness” is… not terribly wild. (I can’t tell you when I decided to take out those extra earrings, but I haven’t worn them for a long time.)

This was not an impulsive decision; we have been planning it for months. Yesterday was her 18th birthday, and by that time we’d designed and researched and looked at local tattoo studios and asked around and had our appointment set for quite a while. She knew exactly what she was getting; I sort of knew what I was getting, and the artist was kind enough to listen to me rambling while I waved my hands around (because what good is rambling without some useless gesturing?) and he would draw, adjust based on the next round of ramble, and draw again. Eventually he held something that matched the picture in my head. And we walked down the hallway (under the sign prohibiting anyone under 18; “Hey, I’m 18!” my daughter declared, as we went back) and got inked. See, I feel awkward saying that, even. “We got inked,” like the cool, tattooed people we are. Or not. (I am laughing so hard right now, you have no idea. Perfect clickbait headline for this piece: Staid, Unhip Mother Walks Into Tattoo Parlor: You Won’t Believe What Happens Next!)

If you are new to my writing and/or my family, you need to understand that my daughter’s 18th birthday was a tremendous landmark. Her adolescence was distinguished by years of struggle with anxiety, depression, an eating disorder, and self-harm. As with any mental illness, recovery is not a state of being; it’s an active, ongoing process. And if I’m being totally honest, there were long stretches of time where things were so bad, hope was a precious commodity and recovery felt impossible. We feared for her life, and if you’ve never been through that with someone you love, consider yourself lucky. (I write for a living and I cannot describe what it’s like to live with that fear to someone who hasn’t experienced it. It’s debilitating.) So: 18 is an arbitrary marker of “adulthood,” sure. But it is, for our family, a triumph. She didn’t just survive, she has thrived. We have grown closer and stronger as a family, and she is still working hard every day, yes, but she is also so much greater than the sum of her demons, now. She is healthy. She is successful. She is, more often than not, happy.

She is 18, and what she wanted for her 18th birthday was a tattoo. It will not be a surprise to anyone familiar with it that Project Semicolon was the motivation. From their website: “A semicolon is used when an author could’ve ended a sentence but chose not to. You are the author and the sentence is your life.”

To tattoo a semicolon on your body is to declare yourself a survivor. I may never have been a rebel or someone who thought of getting a tattoo just for the heck of it, but this is symbolism I love. (And it also doesn’t hurt that I’m a writer and the semicolon is quite possibly my favorite punctuation, too.)

The original plan was matching semicolon tattoos. Small, of course. Neither of us wanted something huge. But the more I thought about it, the more I realized that… I wanted something more. I wanted her tattoo to look like it came from mine, just as she once came from me. And I wanted my tattoo to have a little bit of context. So we talked about it and sketched things and yesterday I waved my hands around with the artist and we got it figured out.

My daughter went first. She barely flinched. My tattoo is larger and I was… not entirely prepared for the pain, which was for the best, I think, because it meant I just dealt with it and went back to breathing normally once it was over. (Fun fact: Having needles jabbed into your skin repeatedly kind of hurts!) We got our permanent marks on the outside to reflect the changes we’ve undergone on the inside, and we did it together, on her 18th birthday. 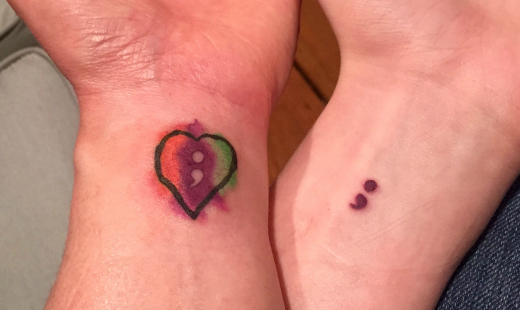 She got her semicolon, in her (and my) favorite color. I got a rough-drawn heart, overflowing with the colors of my family—purple for us girls, green for my son, orange for my husband. It’s messy, and right in the center, my daughter’s semicolon has been carved out and left me with the reflection of it. As a person who never thought I’d end up with a tattoo, it already feels like it’s a natural part of my body, the same way the people I love best are always a part of me.