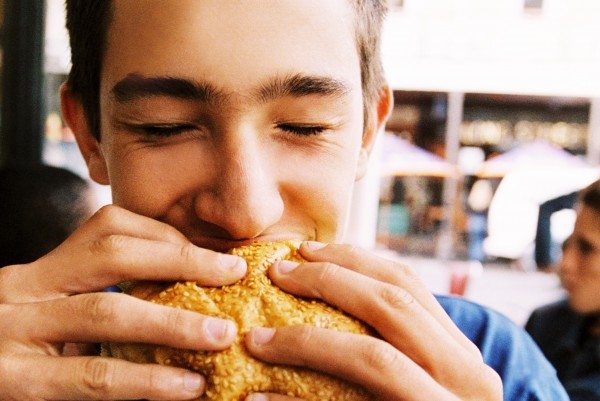 I have nicknamed my eldest son Hoover, after the vacuum. Teenage boys never stop eating. Ever. I am not sure about teenage girls since I haven’t had one of those.

The other night I was cooking dinner when my 16 year old son came into the kitchen. He was convinced that he would surely die if he didn’t eat right that minute. So he got out some tuna fish and quickly whipped himself up several sandwiches, which he ate while standing at the kitchen island.

I use the term “ate” loosely.  What he did to those sandwiches, well, let’s just say that it is probably illegal in several states.

A short while later he ate two helpings of dinner.

He ate leftovers off his younger siblings plates, “You’re not going to throw away the rest of that away, are you?” It is to the point now where before any of them leave the table they ask him if he wants their leftovers. The answer is almost always a resounding yes.

“Do you want the remaining crust of this sandwich, which has been mauled, squished beyond recognition, and probably licked?” Yes.

“Do you want this now bunless hamburger that has been repeatedly stabbed with a fork and is sitting in a pool of ketchup?” Yes.

“Do you want the hardened pasta that stuck to the bottom of the pot?” Yes.

Yes, even teenagers have standards. And those standards preclude any sort of green vegetable, especially leafy ones that do not exist hidden inside of some other food covered with sauce.

A little after dinner I saw my son rooting through the refrigerator and then the pantry.

He kept sighing loudly. So great his disappointment with the choice of snacks. The thing with prepackaged snacks is that they are expensive, they are generally not healthy, and they get eaten at the speed of light. There have been times that I have bought snacks and put them on the shelf in the pantry, turned my back to unload more groceries only to find the in that five second interval the snacks  have all been eaten.  I know you probably think this is an exaggeration.  But it is not.

The loud sighing continued and truth be told, it grated on my nerves just a little bit.

While ignoring him I saw this commercial on television.  I had an epiphany.

I shook my head and sighed just as loudly over his sighs.  I am mature like that.

“Too bad this kitchen isn’t cleaned up yet, I’d make you a smoothie.”

No sooner were the words out of my mouth than dishes were being loaded into the dishwasher, the counters wiped down, the floor swept.

I might just be onto something here. Maybe it isn’t so much the way to a teenager’s heart is through his stomach so much as  the way to getting all the chores done around the house is through the teenage boy’s stomach.

I began composing my list while the blender whirred.

I’d love to make a sandwich for you, too bad the fence needs to be stained first…and the car cleaned out… and the laundry folded… and the lawn mowed.

Oh yeah, I am definitely on to something.