Twitter Facebook Pin It Email Article
Prev Potty Training Wars: Return of the Halfway-There Kid Next Your Baby is Teething! Here’s What Will Help. 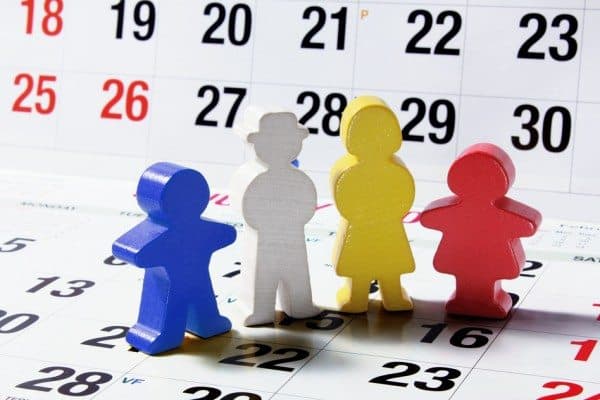 Missing From The Family Calendar

Like every American parent of overscheduled children, I have a fantasy about an organized life. This fantasy centers around an enormous calendar that hangs in the middle of our kitchen. Believe me when I tell you I don’t have a single artsy bone in my body and am incapable of drawing a straight line, and yet because I am somewhat delusional, this calendar is color-coded and a thing of beauty. Truly, it is.

Wondering who has doctors’ appointments this month, and when? Check the calendar.

Curious about assignment due dates, after-school activities, or the band’s competition schedule? Check the calendar.

Trying to remember miscellaneous meetings or when my husband is out of town? It’s on the calendar.

My system for keeping track of various essential time commitments on this calendar is the crowning achievement of my years as a parent. (Why, yes, that is kind of a low bar. It’s been a rough decade and a half, folks.) I’m not very visually-oriented by nature, so to have a colorful hub like this that I actually maintain is nothing short of a miracle. And yes, I know that plenty of parents—probably the same ones who post rainbow candy party favors in wee little mason jars on Pinterest—have done a similar family calendar for years. Me, I just started this system a couple of months ago, at the beginning of this school year. Before now we didn’t have as much stuff all the time, plus the kids just got in the car when I told them to (or, let’s be honest, whined that they couldn’t find their shoes when I told them to get in the car), so I didn’t see a need. But now, man, we have the Master Calendar, and by gum our lives are organized.

But—you knew there was a “but,” right?—no matter how meticulous I am, no matter how often I update it, there’s still a lot of life-altering events missing. And I fear that if I write them down, Child Protective Services might show up on my doorstep. It doesn’t stop me from wishing I could put everything on the schedule, though. To wit:

Oh, like you wouldn’t write this on the calendar, complete with a tiny skull and crossbones, if you thought your female teenager(s) wouldn’t claw your face off in protest. A little bit of warning is nice, you know. Some reassurance that no, she hasn’t lost her mind, and this is temporary, would be a welcome reminder when the whole family is cowering from gale-force mood swings. And based upon my daughter’s periodic wry comments about her brother “becoming a woman,” I feel like male PMS may indeed be a thing, too. Teenagers + hormones = Crazytown. I’m just saying.

At least once a month each of my teens—in all of their executive dysfunctional glory—will completely blow a school deadline due to their disorganization. They’re not lying when they insist they have no idea how it happened, either. My attempts to get the kids on board with making lists and crossing things off has thus far been a bust of comic proportions: My son somehow crosses off items he didn’t actually do (it’s still unclear what’s going on, there), and my daughter simply misplaces the list altogether. Marvelous.

Remember Don Music from Sesame Street? He would start playing a song on the piano (like “Mary Had a Little Lamb”) and he’d screw up a single word (like, he’d say “Mary had a little bicycle”), then he’d fling himself down on the keys in defeat, crying, “No, no, no, I’ll never get it right!” My kids have had these sorts of Don Music meltdowns their entire lives, but watching an adult-sized kid convinced that they’ll “never get it right” or “can’t possibly finish in time” requires a level of fortitude I’m still working to achieve. My job during these is to stay calm and point out that if they’d just stop freaking out and work on the assignment they’d probably finish, but I have to do it in a way that doesn’t make them angrier. This, too, happens at least once a month. I sure would like some advanced warning.

Hey, I Want That Greener Grass!

At least once a month, my son will become convinced that his life would be infinitely better if we stopped homeschooling and he could “go to regular school with everyone else.” Less frequently, but still every couple of months, my daughter will become convinced that her life would be infinitely better if I would just let her ditch the high school and be homeschooled. Each of these events spins into a drama that can last for several hours. If I had some warning of when they will occur, I could start drinking accordingly.

(I know, we can’t really schedule any of those. But wouldn’t it be great if we could…?)

Those Rare Moments of Perfection

Sometimes I think the harder stuff would be easier to endure if I knew for sure that we were coming up on one of those we-must-be-doing-something-right realizations that makes the rest of it bearable. The meltdowns and midnight baking wouldn’t be so aggravating if I could check the calendar and see that oh, hey, tomorrow my kid is not only going to be happy to see me at a school event, she’s going to introduce me to a new friend. Or later this week Shampoogate will be forgotten when my kid handles a difficult situation with a level of grace and maturity I didn’t know he’d reached. If I could schedule that stuff, I’d buy glitter pens. And then that calendar would well and truly keep me sane.

Hey, I can dream.