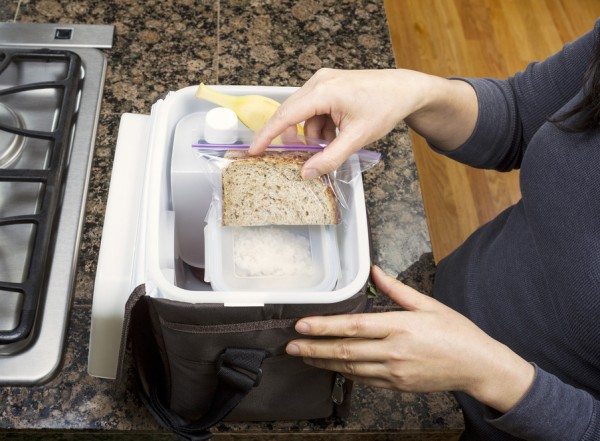 Lunch Boxes Of The Teen And Quirky

If you’ve spent more than five minutes on Pinterest, you’ve likely seen a dozen different ways to pack your wee special snowflake a lunch that’s almost too pretty to eat. Is your little one a grazer? No problem! Simply whip up a bento masterpiece with a smattering a star-shaped cheese cutouts, homemade wholegrain crackers in the shapes of her favorite cartoon characters, the world tiniest, twee-est bunch of grapes, and a hard-boiled egg pressed into the likeness of a whimsical manga hero! Arrange all components in brightly-colored little holders and top it off with a $50 drink thermos filled with organic milk and pixie dust.

In case I didn’t already give it away, those sorts of lunches make me giggle.

Listen, my rules for packed lunches are pretty simple:
1) It should be something the kid will eat.
2) It should contain necessary nutrition/calories.
3) It should never take longer to pack a lunch than it takes the kid to eat said lunch.

These have always been my rules, and my kids have always taken their lunches to school. (Between early food allergies, pickiness, and schools where purchasing lunch isn’t an option, we’ve just always packed.) So when the Creative People Of The Internets get together to show off their masterpieces of noon-time nutrition, I’m over in the corner muttering, “Ain’t nobody got time for that.” Not only don’t I have the time, with two quirky adolescents, no one involved here wants a lunch that’s pretty. And I don’t want teenagers who return home all grumpy because they’re suffering from low-blood-sugar-induced crankiness.

So come along, and I will let you (virtually) peer into some real lunch boxes… they may not look all that exciting, but so far, no one’s starved to death. (I should really write tag lines for a living, don’t you think?)

Lunch for the homeschooled, easily-distracted teen

On days when we do school at home, my younger teen is happy to make his own lunch and consume it without argument. On the days when he attends co-op and needs to bring a lunch, though, he’s likely to “forget to eat” if I don’t make sure his lunch is something he can eat while doing something else. There’s just a lot going on, there, and he doesn’t want to miss anything. He’s also not good at discerning what needs to be consumed that day and what will keep; give him a yogurt and a package of crackers, and he’ll eat the crackers and then express surprise (every. single. time) when I tell him we now have to throw the yogurt away. So now when I pack him a lunch, I give him a heads-up on any perishables, and tell him to eat those first.

My son will most often take a sandwich (lunchmeat and cheese, usually), some form of fruit, one “healthy” snacky thing and one “junky” snacky thing. And a thermos of water. That’s it. If I pack him any more food than that, odds are excellent that he won’t eat anything. (Don’t ask me why. I have no idea.) He will eat one of his snacky items mid-morning, and the rest of his food for lunch. If I give him something that won’t keep—the aforementioned yogurt, for example, or a cut-up apple—I tell him to eat that for his morning snack.

Lunch for the underweight, packing-every-day teen

My daughter takes her lunch every day, and has more self-imposed food rules than I could possibly list here without weeping. My job is to find the intersection between her rules and the highest-calorie concoctions possible. For the most part, I alternate between giving her a sunbutter-and-jelly sandwich on multigrain bread or strawberry cream cheese on a whole wheat bagel. These are the two lunch entrees I know she’ll eat, so I long ago abandoned the notion that there needed to be more variety. She also gets a thermos of water, and a juice pouch. (I never allowed my kids juice until I had a teenager who needs to gain weight. I buy the fruit-and-veggie kinds and remind myself that she needs the calories.) Then I fill in her bag with a variety of snacks and hope for the best.

Acceptable variations to Lunch when it comes to entrees

Both children will accept leftover pizza in their lunches. My daughter will accept dinner leftovers (provided that it’s something she ate in the first place), hot or cold, but my son will not. Basically my son will eat any kind of sandwich but balks at a hot food, even if it’s something he normally likes. (Is it the temperature? The need to use a fork? I may never know.) My daughter has eighty gazillion food rules about texture and temperature, but will happily eat cold rice or leftover cold pasta (blech). Neither child eats peanut butter, but if I put Nutella on multigrain bread and make them swear a blood oath to eat the banana I pack with it, they’ll eat that.

I used to be one of those moms who was all “I only pack fresh fruits and veggies!” and “I never buy snack-sized foods, what a waste!” Hahahahahaaaaaaaaa. (Hubris! It’s what’s for lunch!) I love to give my kids fresh fruits and veggies in their lunches, but I also know that bananas have a small window of ripeness acceptability, apples and pears need to be cut up (thanks, orthodontia!) and then might not get eaten, and some children won’t eat raw veggies without dip (and those same children may “forget” to eat said veggies and dip and then they get thrown away and I sigh a lot). So, yes, I pack carrots and bell peppers and dips, sometimes, and perfect bananas or sliced apples, sometimes, but I also buy applesauce pouches when they’re on sale, little cups of shelf-stable fruits in juice, dried cranberries and raisins, and yeah, sometimes I count those Snap Pea Crisps or Sun Chips as a vegetable.

I do hereby humbly confess that I consider single-serve cups of yogurt a necessity. Yes, I used to buy the larger containers and portion it out for lunches. They didn’t eat it. Now I can buy exactly the kinds they like (that’s a whole ‘nother list; Greek, but only certain brands, or Trader Joe’s, but only certain flavors) and they almost always eat it.

You know that I do a fair amount of baking my own sneaky-protein treats, but I also buy cereal bars and protein bars and those horrible cheese-and-cracker packets because I know they’ll get eaten. They may be nearly grown, but I can still score huge points by bringing home mini Babybel cheeses. And on any day when my daughter has marching band, she gets either a Snickers bar or almond M&Ms to eat before practice. (Desperate times, etc.)

There. Now don’t you feel better about the lunches that get packed at your house?