Twitter Facebook Pin It Email Article
Prev Managing Parental Anxiety When Kids are at Sleepaway Camp Next Things Not To Say To Your Kids. (And You’re Probably Saying Them) 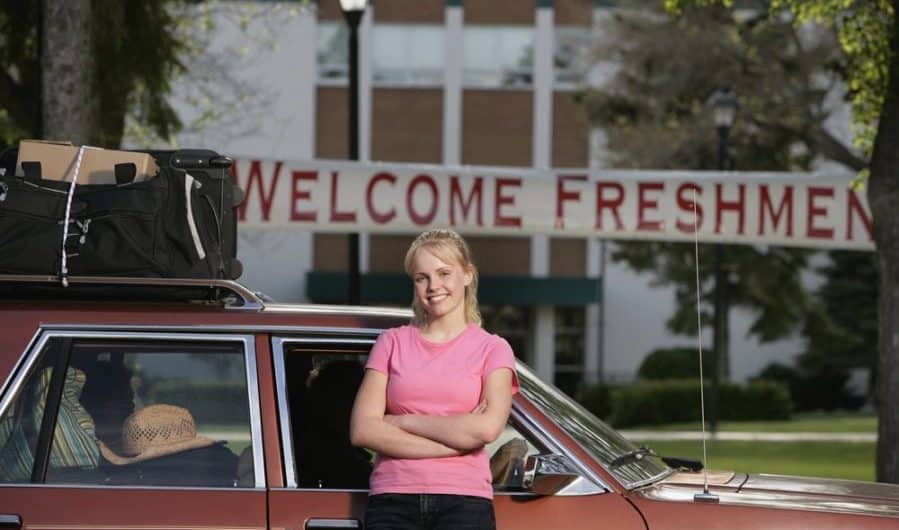 Getting ready to send your kid off to college in a month or two? Me, too, and as this is my second rodeo, I’ve gotten a lot smarter (and poorer…) since the first time. There’s no shortage of packing lists out there—your kid’s college probably sends you one, plus Google is full of ’em—but there’s a certain assortment of items you’ll never see on those lists. These are the items which will make your child more comfortable and/or more popular, as well as the things which will make you look like a rockstar of a parent. Do you need them all? Maybe not. Should you check out this list and make a few selections? Definitely.

1) Duct Tape
Every packing list suggests Command Strips and Scotch tape, and those are necessary, too, but sometimes only duct tape will do. When we were in college, all you could get was the standard gray stuff. Now there’s no shortage of patterns and colors (this one is my daughter’s favorite, but you do you), so pick something that your kid likes and toss it into the mess of “desk stuff.” They can use it to “flag” their electronics cords, distinguish their notebooks, and yes (sorry!), repair cracked shoes and other items. They will use it, I promise.

2) Three-Hole Punch
Not only will they use a 3-hole punch for class handouts, they will quickly become popular in the dorm as the kid who has one. If you really want to be a hero, also spring for a miniature stapler they can easily stick in a backpack for class.

3) Tweezers
The girls out there probably already have these (and wouldn’t leave home without them), but make sure the boys have a pair, too. From splinters to change wedged between furniture, they’ll be glad to have them.

4) Moleskin
I cannot stress strongly enough that I recommend putting together your own first aid kid for your student rather than buying a prepackaged one (here’s a post just on that topic!), and the item you won’t think to add (but should) is moleskin. Its most common use is for blisters and other shoe-rubbing issues, but it can also be used to add padding to all sorts of other things you might never think about until you need it. In a dorm with particularly close quarters it’s useful on furniture corners, even. It’s cheap and can be cut to size and they’ll be happy to have it on hand.

5) Beach Towel
Take a look at those nice, new bath towels you just bought for your student. Don’t think about how often they’ll be washed (spoiler: not often enough) or what manner of messes they may end up soaking up in a pinch. But do add a beach towel to the pile for any field trips to the pool or beach, or just taking out to the quad to sit on when the weather is nice. Without a beach towel they’ll just grab a bath towel, and then when the towel is left behind or covered in dirt, they’re down a towel.

6) Stain Pen
Sure, you bought laundry detergent and stain treatment and maybe even fabric softener and/or dryer sheets, but the kid who has a Tide pen or Clorox pen in his backpack is popular in a hurry. I mean, let’s be real, here: Is my son going to care if he drops lunch on his shirt? Maybe not. But if he’s with someone who does care? Well, now. New friend!

7) Stick-on Card Pocket
Step onto any college campus in the country and you’ll be able to spot the freshmen by the lanyards dangling around their necks. First-years tend to get an ID holder on a neck strap and wear it (and maybe their room key) everywhere so that they don’t lose them. It’s convenient, but also sort of the mark of a “noob.” If your kid would rather not stick out this way (or if—like mine—they simply find wearing something around their neck uncomfortable), pick up some variety of card holder that adheres to their cell phone case for them to keep their student ID handy. Many colleges even tell students specifically that they should never put their IDs in their wallets—if your wallet is swiped, it’s gone. But most college kids always have their phones in their hands, and as often as they’ll need to whip out that ID for building access and meals, a simple adhesive pocket is a great solution.

8) $100 in Emergency Cash
Most packing lists suggest a small, corded safe for the dorm room, especially if your student will be bringing any prescription medications. (My kids both have Safegos, which I find to be the best intersection of size/price/function.) Yes, no one ever uses cash anymore. Yes, we all have ATM cards and credit cards and Apple Pay. But sometimes, cash is the only solution, and sometimes you need that solution during a time when you can’t get to an ATM or your account is empty. Certainly have a conversation with your student about how/when it would be appropriate to dip into this stash (and whether it’s their money or yours, too), but regardless, put $100 in their safe. Just in case.

9) Sneaky Cards
I’ve yet to meet the teenager who doesn’t find these cards delightful, but this is an especially key purchase for a kid who might be a little shy/awkward about interacting with strangers. For under $10 you can’t buy a better way to facilitate some new friend-making. This is not a game, per se, but a series of “missions” and a ton of play-it-forward action. It will spread through the dorm like wildfire and it’s good, clean fun.

10) Cards Against Humanity
In contrast, Cards Against Humanity is not suitable for anyone who isn’t ready to be raunchy, and so I’ll grant you that it’s not for everyone. That said, of all the sit-around-in-a-big-circle-and-play-a-game options that showed up in my daughter’s dorm, this was the most popular. I’ll leave it to you to decide if you’re comfortable with your darling baby playing such a game. (Full disclosure: My daughter has the original deck as well as every expansion pack. This makes us either awesome or terrible parents, depending on your point of view.)

11) Candy
Another overlooked (to my mind) key item to send along is candy. Lots of candy. Sure, yes, buy “dorm snacks” which are healthy and an assortment of grab-n-go items for when the need arises, but who’s the popular kid at 2:00 am when everyone’s cramming for a test the next day? The kid with nine pounds of Twizzlers, that’s who. If you only send enough for your kid, you’re missing a key opportunity.

12) Small Name Labels
This isn’t summer camp, so don’t go sticking them on everything your kid owns, but include a package of them and let them figure out what needs labeling and what doesn’t. There are a surprising number of portable items nearly every kid in the dorm has (and has the same one as everyone else…), so buy something like these mini labels (they’re small enough to put on pencils!) and let your kid decide when to use them, if at all.

These are just the ones that come immediately to mind; I’m sure there are others. Seasoned college parents—what’s missing that won’t show up on a typical packing list? Let us know in the comments!