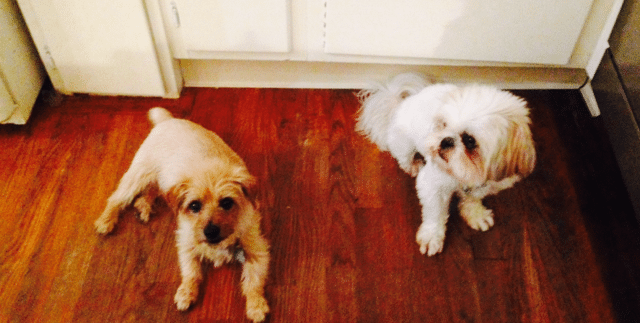 I used to be a dog owner. We had a gorgeous rescue dog that we were were pretty confident was a mix between a Lab, a Greyhound and a kangaroo. She was a very quirky, lovable dog that needed to run about 10 miles a day to be calm. So we exercised her a lot.

But as I walked her down the streets of Manhattan, I was amazed at the fear of some children. Why were they afraid of my sweet-tempered, although highly-spirited pup? Why had their parents taught them to fear dogs?!  It made me sad because I had grown up loving dogs. Why had these parents taken their own fears and transferred them to their children?

(Note to all future parents: If you judge other parents, it will come back to haunt you.)

My children, 3 and 1 at the time, loved our dog Martini but she was just not meant to be a city dog. In the end, we had to find our rambunctious pet a wonderful home in Connecticut where she could run and play without the limits of city living.

Fast forward and when my younger daughter (at the time) Summer was about 3 or 4, I started noticing she was intensely fearful of dogs. She didn’t remember our former dog and grew panicked whenever a dog was around. There was never an incident where she was bitten or scared. This anxiety seemed to just suddenly appeared.

As she described it, “It’s okay when there is a person in a dog costume but I don’t like real dogs.”

I figured she would grow out of it. It was a phase. Kids get anxious! A friend told me about her daughter once fearing lawn shrubbery. Children get over this stuff. So I didn’t give it too much attention and tried to foster positive relationships with dogs. I definitely didn’t worry.

That little girl is now 8 and still incredibly fearful of dogs. If we go to a block party, she can’t even have fun because she is terrified someone might show up with a dog. She won’t play at someone’s house unless their dog is put away in a separate room. The fear hasn’t dissipated. It’s only gotten worse. Every year, we spend a week with my mom in Connecticut. My mom happens to own two adorable canines. This is them….

For an entire week, my daughter Summer lives on the counter. 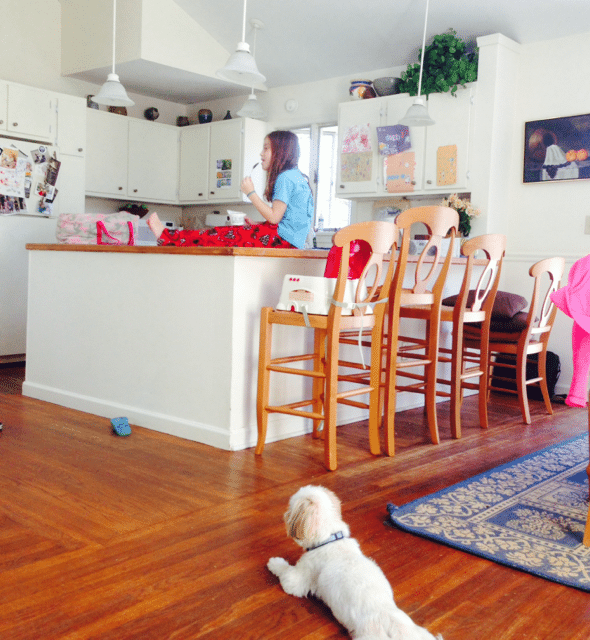 Summer can’t even explain why she is so scared. To have compassion, I try to imagine how I would feel if every dog was a snake. The idea terrifies me since I really hate snakes. So it helps me get where she is coming from.

When we see a dog on the street, Summer leaps to the other side of the road. The dog owner will usually say something like, “Oh don’t worry. My dog is a sweetheart. She loves kids!”

I appreciate that. I really do. But the thing is, it’s not about their dog. Their dog is cute and fluffy and my kid really doesn’t want to be anywhere near him or her. It’s not a personal thing.

And it’s also not about anything I taught my child. It’s an anxiety. We all have them.

I’m trying to go at my daughter’s pace. I respect her fears and try to reduce her dog exposure whenever we can. Be we are also trying to take baby steps. We show her photos and videos of dogs. She shares a room with her sister who plasters her side of the room with adorable puppy pictures and that seems okay. But Summer is not ready to get anywhere near even the gentlest of dogs.

My neighbor will soon be getting an 8 week Goldendoodle. I’m hoping Summer can learn to tolerate this pup and even maybe like him?

I don’t think she’ll ever be a canine lover but we are doing what we can to reduce her stress in our dog-loving world.

She’s old enough and it’s causing enough problems that I’d look into cognitive behavioral therapy for her. As far as the “never be a dog lover” goes you never know. My little sister had extreme anxiety around dogs for years after repeatedly being jumped on and knocked over by our neighbors enormous puppy (he would break his chain and run into our yard). Now she loves dogs, has spent time volunteering at shelters, and is the proud mama of a 70 lb mutt.

I developed a similar dog fear as a child. Could not be on the same side of the street, etc. It showed up shortly after a major move and had nothing to do with a dog incident and lasted a few years. After regular exposure to a relative’s dog over time, the fear dissipated. I’m a total dog lover today and own my own 95 pound lab mix, so it’s possible she may love dogs again one day!

I have two dogs (and two kids who love all dogs), and am very aware that some kids just can’t with dogs. Okay, not a problem. Whenever we have someone new coming over I make it very clear that we have dogs -friendly, well behaved, kid loving dog, but dogs that are, none the less, dogs. Should I put them in the basement or will your kid be okay? The problem is, so many times the parents will tell me, oh don’t worry! So-and-so is fine with dogs. And then the screaming starts… Some times I’m sure they’re just trying… Read more »

I was exactly like her as a kid!!!!! It wasn’t until we got a dog for our own kids, that I got over it. I believe I was 40 yrs. old. I’m still fearful of big dogs! And anything that comes out of our dog still completely disgusts me! But I’m about 90% cured. My parents are still in shock when they see me cuddling with our dog. I don’t know if there’s really anything you can do to help her. Any type of “therapy” would have made me feel horrible! Just be patient…

My daughter has extreme fear of any types of dogs. It gets worse and worse each day 🙁 she screams, cries and ran away if there’s a few dogs around her. She is now 7 yrs old and I’m afraid her panic attacks will keep getting worse and worse. Any suggestion will be greatly appreciated.

I found your post after a google search!  Not only did you describe almost word for word what we are experiencing with my 6 year old daughter but her name is also Summer!  : ) My Summer’s anxiety is getting worse in some ways and better in others.  She is now okay if there is a dog in proximity that is on a leash.  Likely because every time I see a dog coming I say to her “It’s okay, Summer. The dog is on a leash.” or “There’s a dog coming but it’s on a leash.”  I started saying this… Read more »