Twitter Facebook Pin It Email Article
Prev We’ve Got Each Other. And That’s All That Really Matters. Next Transitioning To Middle School With ADHD 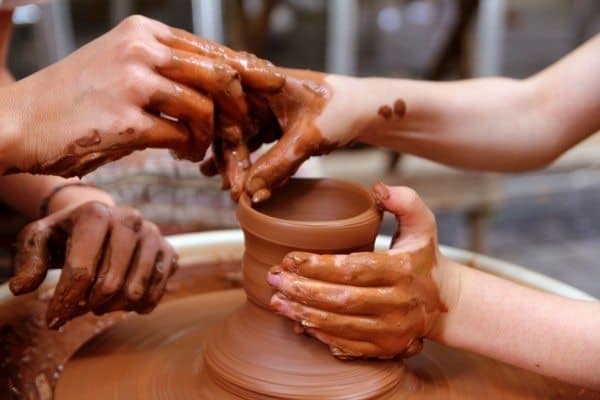 The Family That Clays Together…

Because my husband married into a package deal—take on the wife, get two kids for free!—we have always referred to our wedding anniversary as our familyversary. Each year he looks up the “traditional” gift for whatever year we’re on, and then appropriate gifts are doled out to all three of us. Last year, on our seventh anniversary, because the traditional gift is copper, we each got a framed set of pennies, one from each year we’ve been together as a family unit. (Super sweet and creative, right? I got the very best husband. Don’t even bother arguing.)

This year we celebrated eight years of legal entanglement (guess who’s the romantic in this pair…?), and the traditional gift is pottery. On the day in question, my husband handed me a beautiful hand-made dish from a local shop, and then announced that he’d signed all of us up for a 2-hour pottery wheel class a few weeks later. I was thrilled. Also: worried.

Let’s back up for a minute. We’re still dealing with the emotional fallout of the decision to sell our camper. Although quite stoic about it, initially, as we readied the camper for sale, my husband was clearly going through a mourning process. I recognized what he was going through, because I’ve done it myself (though I did it a lot earlier than he did); it’s much less about the current event (in this case, selling the camper) and more about the “what if”s and “if only”s of having a different family than the one you pictured. I adore both of my children. My husband does, too. But this is not the family life purported to be the norm. We are raising two special needs teenagers on the autism spectrum who have good days and bad days and days in-between. Sometimes they’re like everyone else; much more often, they’re just not. Life turns out to take a lot more planning and patience and flexibility than we’d anticipated. My armchair psychologist assessment is that my husband is not sad about selling the camper, he’s sad about the fact that camping is a lot harder for the kids than it was for him, and also that lots of things are harder for our family than it seems like they should be. In the grand scheme of things, we are very lucky and have a good life, but still… sometimes those differences just feel really unfair.

Back to the pottery class: I was elated (how thoughtful! how fun!), but then I was nervous. We’d be taking my son somewhere new with lots of people and probably noise, which could be problematic. We’d be taking my daughter to do a very messy activity (not her favorite…), which could be problematic. Neither kid tends to do well with something they can’t master, and I knew that as novices we’d likely not be walking out of there with gorgeous creations.

It would be a blast, or it would be a disaster. That much was clear. I put it out of my mind until it was time to go.

We all donned old clothing and arrived early. We were so early, in fact, that we were the first ones there. Perfect! We got to pick our wheel locations, which meant I could sandwich my son between me and the wall and my daughter between me and my husband. We sat at the far end of the studio, away from the sinks and the clay, so there was no one walking behind us to retrieve things. It was the best distraction- and stress-free zone I could manage. One teacher showed us the steps of preparing a lump of clay and working it on the wheel, and another stood by ready to assist, if necessary. Ideally, each member of this class would have the opportunity to make two items in the first hour, then paint them and ready them for firing for the second hour.

The first thing you need to know about this adventure is that we were all just terrible. I mean that between the four of us there wasn’t a single speck of aptitude for pottery. But the other thing you need to know is that my worrying was really for naught—we had so much fun that night, it absolutely didn’t matter. We got filthy. My daughter and my husband both ended up with the teacher quickly throwing a small bowl for each of them because their clay kept flying off the wheel or collapsing in a heap or otherwise refusing to cooperate. And we laughed for hours and totally got into it.

[In the interest of full disclosure, I feel it only fair to mention that I made a really lovely bowl—much to my surprise—and I was feeling smug right up until it collapsed onto itself while waiting to be painted due to an uneven/too-thin area I hadn’t noticed. It shall be my Dali bowl, I guess.]

When it came time to paint, my son coated his creations in record time, then got up and went and sat by the door rather than staying at the crowded table with the rest of us. One of the teachers asked me if he was okay. “He’s fine,” I said. “He’s just done.” I realized this wasn’t as explanatory as I’d hoped. “He’s autistic,” I continued. “Two hours is a long time for him to spend in a giant group of people doing something new. He’s just decompressing over there.” I realized that just a few years ago, instead of removing himself from the fray and remaining cheerful, my son might’ve fretted and complained and eventually melted down right in the middle of the class. I noted to myself that it was interesting that other people were concerned he was unhappy, when I was internally doing a little happy dance because he was doing such a great job of self-regulation. As we drove home, I asked him if he had a good time.

“It was really fun!” he said, a note of surprise in his voice. Fair enough.

My daughter was the last one finished, time slowing to a crawl as she meticulously decorated everything to her satisfaction, chatting the whole time. All the other students were gone by the time she was done. Did she have fun? “That was GREAT! But wow, I’m covered in clay. I’m fabulous.” Another victory.

Best familyversary yet? I’d say yes. Thanks to my husband once again pushing us all outside of our comfort zone, we had a fun new experience and everyone lived and even had a great time.

Maybe our triumphs as a family don’t look the same as in other families, but that’s okay with me. Our family is my favorite one.