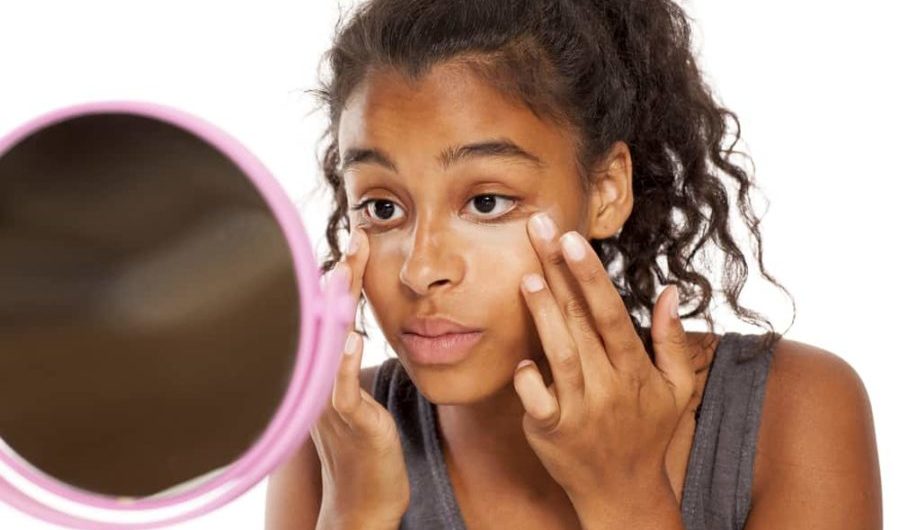 How To Give Makeup Advice To Your Teen

I have a situation I hope you can help me out with; actually, it is my daughter’s situation. At the age of 13 she is totally fed up with dark circles under her eyes. Personally, I don’t think they are so bad, but I’m an adult so I don’t understand. In my attempts to help her deal with these circles, I have mentioned that they are most likely a reflection of her not getting enough sleep, but now that she is 13 I’m done trying to manage her bedtime. (okay, not really – she does regularly get between 7 – 8 hours of sleep a night). My analysis of her nutrition didn’t win me any mother of the year awards either. So, prevention hasn’t been a tactic she’s been willing to take.

And we were told that they would grow out of toddlerdum.

Her attempts to deal with these circles on her own has led her down the path of concealers. Results haven’t been good, and in some cases the attempt to conceal looks worse than the dark circles themselves. Which, since you too were once a 13 year old girl, I’m sure you are familiar with the ugly crying that follows and nasty under breath comments I have been subjected to when trying to gently mention she might want to try again.

Can you & your makeup empire help not only my daughter but keep me out of hot water?

Once upon a time, there was a girl who decided to start bossing people around on the Internet, particularly in the areas of makeup and hair. She did not have any children, though she wanted them desperately. One day, a magical fairy arrived from the land of Internet pregnancy message boards and sprinkled the girl with baby dust and asterisks and whatever the hell this thing –> ~ <— is supposed to be. And the girl got pregnant! And promptly ran the stupid fairy over with her car.
And a lot of people assumed, since the girl was so, well, GIRLY, with the makeup and the hair and the shoes and the handbags, that she would naturally have a girl, who would be pretty and well-coiffed and they’d get manicures together. The girl announced she was having a boy, and then ran THOSE people over with her car.

And she had a boy, and another boy, and sometimes she whines about the boring clothes and the short hair, but then one day she read this question and lived happily ever after.

Anyway! Yes. Girls and their makeup and their mothers. The best thing for you to remember is that you know *NOTHING* about *ANYTHING*, despite having full decades of makeup usage history on your daughter. Thus, you get other people involved.

Things you can do to help with make-up advide:

1. Enlist the help of others: Consider taking her to a spa (or to M*A*C, or just a department store) for a makeup application. Where the makeup application is actually a makeup application LESSON. If money isn’t too tight, you could make it a mother/daughter day with facials, thus decreasing the chance that she’ll see right through it and realize you’re still on her about doing her concealer wrong, oh my GOD. She might be more willing to listen to a makeup artist or esthetician or even just some 16-year-old at Sephora about how to apply concealer and the impact of sleep and water intake on dark circles.

2. Discuss the importance of hydration: Is she drinking enough water? If you can encourage her to swap soda for water, or at least drink more throughout the day, that can also help with the circles. Buy her one of those really cool eco-friendly water bottles, like a SIGG. Or maybe a reader who actually has a teenager can suggest a brand/style of bottle/canteen that the Kids These Days seem to like.

3. Skin Care:  Buy her an eye cream if you think there’s any chance that she’ll actually remember to use it. The results may be a bit more immediate than the other preventative measures that she’s not willing to take, but it won’t be instant gratification like concealer, so she may lose interest in a couple days. So…don’t spend a fortune, obviously, though it’s never too early to teach your daughter to look at more than just the price tag. Something organic and natural for her still-young, still-not-irrevocably-messed-up-from-years-of-sun-and-abuse skin, like Burt’s Bees or a caffeine/green tea sort of thing.

4. Magazine subscriptions: While this may be something you are totally not comfortable with — I have no idea how I really feel about it, but nyah nyah nyah I have boys and don’t have to think about it — I admit that everything I learned re: proper makeup application, I learned from magazines. Seventeen, YM, Sassy, etc. I haven’t picked up a copy of Seventeen or Teen Vogue (or whatever other offering that hasn’t gone belly up) in years, so I admit I don’t know if they’re still somewhat appropriate for a young teenage girl or absolutely horrifying. But, I did learn a TON from those old rags. If you’re not keen on getting her a subscription to her own magazine, you could always cut out articles and how-to’s and demos from your own magazines and give them to her — not so much entirely focused on the concealer, but just general make-up and hairstyle things that would be fun for her to play around with on the weekends. Meanwhile, she may (hopefully) slowly absorb the idea that visible makeup isn’t preferable to visible circles or blemishes. (Something me and my teenage acne didn’t learn for QUITE a while, gah.)