Beginner Jigsaw Puzzles: The Yay to the Nay

Awhile back, I had read that puzzles were really good for promoting math skills, which I think is especially important for little girls. At the time, I got Mazzy some wooden puzzles where you fit the right shapes or letters into slots. She has now mastered most of them and I thought it might be time to try some beginner level jigsaw puzzles.

I tried four different jigsaw puzzles, having no idea if they were too advanced for my 2 1/2 year-old daughter, but found that she really loved them. She is not at a level where she can complete any of them on her own but I was continually impressed by her ability to find matching pieces and put them together, many times without my help. The whole exercise was a good lesson for me in challenging her abilities and something really enjoyable for both of us to do together.

I will review each puzzle in the order that she tried them. 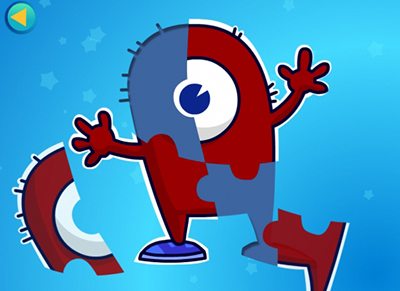 Mazzy’s first foray into jigsaw puzzles was actually a long time ago on an app called Alien Buddies. The app (available for iPhone & iPad) has lots of different games, one of which is putting together different aliens which have each been separated into four jigsaw pieces. Mazzy found this game on her own and quickly became obsessed with it.

Although, it is fairly simple and the puzzle pieces snap into place electronically and without being perfectly lined up, I think it was a really good introduction to jigsaw puzzles (although by no means a substitution for the real thing) and helped her more easily to understand what she was supposed to do once I introduced the jigsaw puzzles below. 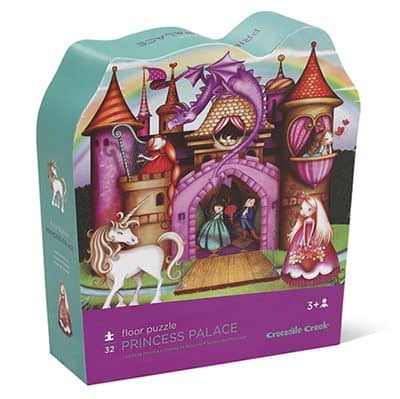 This puzzle is 32 pieces and meant for children 3+. Mazzy will be three in a few months and absolutely adored this puzzle from the second we took it out of the box. The pieces are big and colorful and the picture is really beautiful. The box says “floor puzzle” but it was still small enough for us to put it together on our coffee table, which was much more comfortable for everybody— especially me.

The picture has a lot of different elements so it’s easy for Mazzy to say— let’s put the unicorn together first, now let’s work on the dragon, the flowers are next to the princess, etc. and easily identify the right pieces to use while having little moments of accomplishment even before the puzzle is fully put together. Mazzy was also a big fan of holding puzzle pieces up to the picture on the box to figure out exactly where they should go.

The pieces are made of good thick card stock so they really snapped together well, giving Mazzy a very satisfying feeling of completion. Over and over again, she would shout, “I did it!” which is music to a mother’s ears.

We completed the puzzle three times the first day we got it and it was the first thing she wanted to do the next morning. Each time we put the puzzle together, it took about 20-30 minutes because I let her do the majority of the work. It’s the perfect amount of time to really occupy her time but not too long that she gets bored and wants to move on to something else.

I’ve also found, the more she does it, the more she can accomplish on her own— she really remembers the specific puzzle pieces— and I predict that soon she will be able to complete the puzzle without my help. Here’s a link to Crocodile Creek floor puzzles. 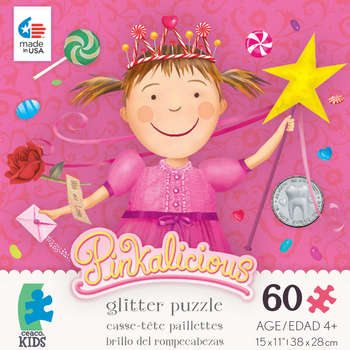 This puzzle is 60 pieces and meant for kids 4+ but Mazzy feel in love with the box at the store so I got it for her anyway. I was thinking we wouldn’t have much success with it and as soon as I poured the tiny pieces onto the table, my fears were confirmed. Mazzy, however, did not experience the same anxiety I did (having no idea what we were in for) and was excited to get started.

The pieces are much smaller than the Crocodile Creek puzzle and the finished puzzle is much smaller as well. I actually think Mazzy liked the smaller size because she could really see the full picture from an early stage. The smaller pieces didn’t pose much more of a difficulty for Mazzy but being a flimsier card stock, they didn’t have quite the same satisfying snap of the Crocodile Creek puzzle. There were numerous times when Mazzy had the right configuration but because the shapes were a little off, she got frustrated and thought it was wrong.

Obviously, we had to do it together and I spent most of the time trying to find matching pieces as quickly as possible so I could guide Mazzy without there being too much lag time. She had a much harder time identifying the matching pieces herself since everything is pink. She was able to put together Pinkalicious’ face mainly on her own, but after that, she really needed a lot of hand-holding.

Still, she enjoyed the experience, continued working until the puzzle was complete and asked to do it again the next day. 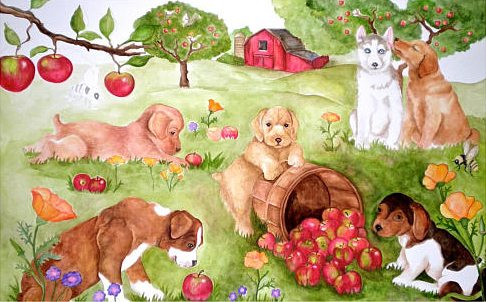 This puzzle is 48 pieces and meant for children 3+. It is considerably larger than the Crocodile Creek puzzle, meaning we had to do it on the floor. I felt that the size was actually too big because it didn’t allow Mazzy to have a complete picture of what was going on.

The picture is of all similar-looking brown dogs on green grass, so it wa s really hard for Mazzy to differentiate between the puzzle pieces. I had to prompt her each step of the way, giving her each piece and telling her where to put it— which was hard even for me because everything looked so similar. The pieces were the same size as the Crocodile Creek puzzle but a thinner card stock so they did not have the same satisfying snap.

This was actually the first puzzle that we did not complete. Mazzy deemed it “too hard”, got really frustrated and asked to watch television. It is still sitting uncompleted on our floor despite numerous attempts on my part to suggest we finish it.

Honestly, I am a little scared that by experimenting with so many puzzles so close together in time, I might have turned Mazzy off from an endeavor she initially enjoyed. I wish that I just gotten the Crocodile Creek puzzle and let her tackle that until she asked for something new. Crocodile Creek, even though it is the most expensive, is by far the best puzzle of the group. Especially for Mazzy’s age group.