Twitter Facebook Pin It Email Article
Prev Where’s the Beef (on Pumping)? Next The Mechanics of Night Nursing 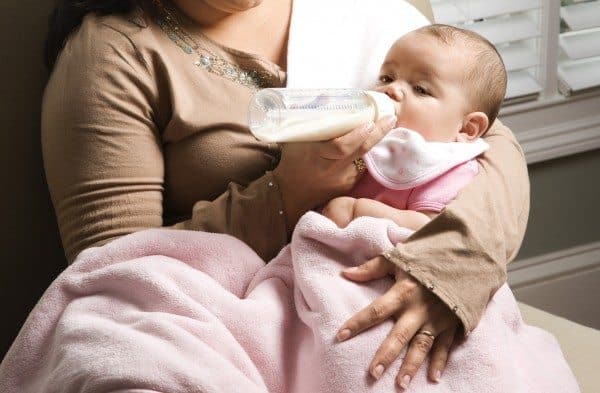 The things I ponder late at night while my 8-week-old daughter is sleeping (and I should be sleeping, too!)…  Anyway, I have this burning question about infant formula, because as a first-time mom who had hoped to breastfeed for the first year, I am completely clueless about this sort of stuff! Since you tend to lean more towards the organic/healthy living side of things, I thought you might be the perfect person to ask!

I have been exclusively breastfeeding my daughter since she’s been born, but I have a medical condition (rheumatoid arthritis) that may soon require me to start taking medication that is not safe for breastfeeding. So, I’ll have to introduce formula at some point. I thought I had done all my research, and was all set to start her on a store-brand organic formula when the time came for me to start my meds. I was ecstatic that if I had to give her formula at all, then at least it would be made from cow’s milk that wasn’t exposed to pesticides, growth hormones, or antibiotics. Plus, the price was right…I thought it was an easy decision. As I did a little more looking into formula-related things the last few days, I discovered that most specialty formulas (soy, organic, etc.) use corn syrup as a sweetener. “Normal” formulas do not. So now I’m torn–which is the lesser evil? Corn syrup or cow’s milk and other ingredients that have been exposed to the hazards I listed above? Does it matter? I harbor no illusions that I’ll be able to shield her forever from corn syrup, regular, run-of-the-mill cow’s milk, or processed junk foods…but I want to give her the best nutritional start I can.

Thanks!
Confused in North Dakota

(To anyone stumbling upon the Advice Smackdown for the first time, please note that I am a HUGE fan and proponent of breastfeeding, and of breastfeeding exclusively. I am thrilled to be currently and successfully nursing my third baby. But I also know from prior experience that it doesn’t always work out that way, and am personally way grateful that so many different formula options exist for mothers like me and the OP here.)

So here’s my personal formula track record: Noah received formula supplementation until about five-and-a-half months, and then was 100% on formula until the switch to cow’s milk. I was not…ahem…as well informed as I am now, in regards to organic foods and pesticides and GMOs and all that. So he drank regular old non-organic non-special Similac. It’s what we were given at the hospital and he liked it and our nearby (hideously stocked and tiny) city grocery store always had it on the shelves, so there. Done.

By the time I was pregnant with Ezra, I was significantly more educated (or perhaps simply OPINIONATED), and assumed we would keep organic formula on hand, in case breastfeeding didn’t go well again. But then I read a NYT article about organic vs. non-organic formulas. The “shocking” consensus was that the organic versions were significantly sweeter, since (at the time, anyway) most of the big brands were using cane sugar. Cue the fears of sweet teeth, obesity, diabetes, oh my!

So I was torn. Which was worse? In the end, Ezra needed very little formula at first, and then only occasionally later on, once my pumping efforts stopped producing enough extra for storage. So I never really made a decision. I would pick up “regular” formula one time, and then once we went through that, I’d opt for the organic. Similac, Earth’s Best, Target brand…I don’t think we ever developed a shred of brand loyalty that second time around.

Now, once again, everything is different and reformulated and there’s a whole new list of priorities to hash out. On the one hand, my two older boys have virtually identical craving levels for sweets, and neither is anything even CLOSE to overweight. Noah, the non-organic formula junkie who ate Gerber from the jar and teething biscuits from the box, is a healthy 50th percentile for weight. Ezra, the breastfed baby who got only homemade organic everything, is barely in the 10th. But Noah was 10 pounds at birth vs. Ezra’s seven, so…I think the size difference was pretty much preordained.

On the other hand, Noah has a very real and serious sensitivity to many ingredients found in highly processed foods. (Artificial food colorings/flavors/preservatives.) But there’s no reason to believe that our FORMULA choice had anything to do with that — it’s just made me want to ban that garbage from our lives completely and live as organically and chemical-free as possible. It’s made me change my mind about a lot of things.

So in the end, did it matter what formula the boys drank? Eh, not so much, probably.

But what would I do now, if Ike needed formula?

Well, at the hospital, Ike drank a few ounces of regular old hospital-supplied Similac. And at home, before I got to pumping, he had a few more while Mama got the hell out of the house for a few hours. But if I were to purchase a can of formula for him…yeah, I’d go with organic. Hands down.

Now, I completely understand that organic junk is still junk. Sugar is sugar is sugar, in the end, if you use any of them in excess instead of moderation. But. Corn syrup, for the record, is not the same as the much reviled-and feared high-fructose corn syrup. HFCS is much, much SWEETER (from the high fructose levels) and more highly processed than regular old corn syrup. Corn syrup is glucose sugar, which is slightly less sweet than sucrose (cane or beet) sugar, and much less sweet than fructose (which is found naturally in fruit, agave nectar, honey). So technically, an organic formula sweetened with corn syrup solids (or glucose syrups solids, as it’s called on some brands’ ingredient lists) would be your best bet for a less-sweet formula. (I’m not a scientist, however, I’m just going with what I’ve learned via dumbed-down blog posts about sugar options.)

The long and baffling ingredient lists on formula cans can certainly make your head spin, but you know? You have to feed your baby.  And in your case, take care of yourself.  So I think you can go with an organic formula and feel pretty good about it. No pesticides, growth hormones, genetically modified ingredients — pretty good trade off for a little corn syrup, in my opinion. We know what sugar does, we don’t yet fully know what effect all those other things might have on a tiny developing body.  But really, we’re all just trying to make the best decisions we can with the best information we have at the time. Whatever decision you make will be loving and made with the best of intentions, and that in and of itself matters a lot.