Twitter Facebook Pin It Email Article
Prev Cloth Diaper Service vs. Buying Your Own Next The Line in the Sand 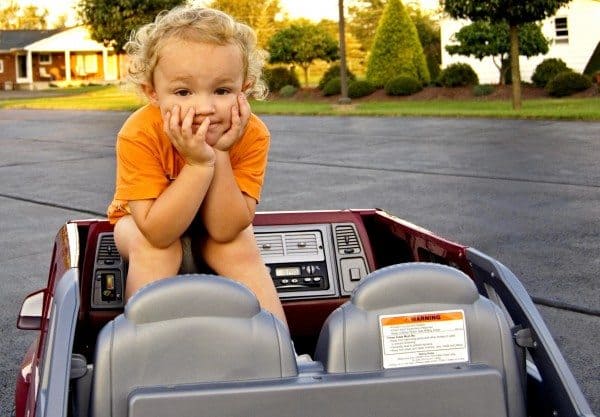 Car Seat Confessions: 10 Things You Might Not Know About Keeping Kids Safe

Once upon a time I wrote what I thought was a harmless little post about switching my first son, Noah, to a car booster seat. The baby seemed to be getting a little cramped in his infant car seat, so we thought we’d upgrade Noah before Ezra actually needed the big ol’ Britax convertible, just to offset any potential transition issues down the road. At the time, Noah was three years old, though closer to four, and about 35 pounds. We purchased a Graco high-back booster seat that said it was intended for children who were at least three years old and 30 pounds — criteria he more than exceeded.

Admittedly, I’d gotten the booster we purchased mixed up in my mind with another model, and was surprised that it only used the shoulder belt instead of a harness. Huh! My 3-year-old son using the seat belt! Already! Who knew?!?!

That post caused an UPROAR. My readers freaked out. It got linked to on a forum that apparently existed solely to talk about car seats, and its participants stampeded over to inform me how terribly negligent I was being.

And you know what? I didn’t respond to it very well, particularly since a lot of the hollering was not coming from concerned readers who were expressing themselves nicely, but strangers hellbent on calling my entire fitness as a mother into question. I was told that beyond needlessly endangering my son, I was breaking the law. People assumed that I was planning on putting the under-a-year baby in the Britax front-facing, when I of course had no intention of doing that. It’s a convertible seat! He’ll be rear-facing! I swear to God!

And I kept staring at the Graco box, totally baffled. Three years! 30 pounds! It says so right there! This is a highly-rated seat that passed all the necessary safety tests, purchased in my state and county, so how could it be illegal to use? What in the world is going on here?

Misinformation on both sides, as usual. I had never actually heard of the “four years/40 pounds” recommendation for booster seats. Other people had, obviously, but mistaken that recommendation for a law. The actual LAW, at least where I live, simply states that children must be seated in an appropriate child seat or booster that passed certain safety tests, and they must be using it according to the manufacturer’s specifications. Our booster seat met all of these criteria. I rolled my eyes, closed comments and moved on with life.

A couple weeks later, Noah had a tantrum while seated in his booster. I tried to talk him through it from the front seat, only to watch him in the rearview TURN HIS BODY AROUND and completely SLIDE OUT OF THE SEATBELT ONTO THE FLOOR. While I was DRIVING. At a not-entirely slow speed in a high-traffic area.

I pulled over immediately and screamed at that poor child like I have never screamed before. I was scared and shaking and sobbing and so was he. I buckled him back in, drove right home and yanked the booster out of the car and put his Britax back in.

When Ezra really did truly outgrow his infant seat (MONTHS after I’d originally declared the move “imminent”), we bought Noah a second high-back booster seat — another Britax, with a five-point harness belt. He is now just about five years old and over 40 pounds, but I have zero intention of using the shoulder-belt booster regularly anytime soon.

I’m telling you this because I just want you to know that I am not perfect. Even a mother who often jokes about being overly-researched and web-enabled can make a really, really stupid mistake about something really, really important. I now know that the manufacturer’s instructions and guidelines on the side of the box aren’t really all you should be paying attention to. I now know that we switched both of the boys to front-facing sooner that we SHOULD have, even though technically we were told we COULD. I have ridden in taxis and trains without car seats. I flew with Ezra on my lap once and I didn’t bring a booster for Noah when we flew to Jamaica. The car seat provided for him by our hotel there terrified the hell out of me, but I mostly just hoped it was better than nothing. We picked up an ancient car seat at a yard sale for use while visiting out-of-town family one time and only later did I think to check if it had been recalled. (It had.) These are my car seat confessions, and I’m hanging my head in shame while I read over them.

I know I’m not the only one, though. A friend of mine is expecting her third baby and just emailed me to report that after she just went to one of those car seat install/check things at their local police station (only because she thought her older kids would think it was fun)…she learned that she’d been installing the infant seat ALL WRONG, with BOTH babies. She also didn’t know about the six-year “expiration date” guideline for her seat, which was already five years old at that point.

So today I’ve compiled a list of some of the little-known (and or widely ignored) car seat guidelines and factoids. Most of these come courtesy of the Car Seat Lady, a great online resource for everything related to car seats and boosters, a resource I really wish I’d know about back before the Great Booster Seat Debacle:

1: The guideline of “12 months old and 20 lbs” is no longer relevant.  Instead children SHOULD sit rear-facing as long as possible, at least until age 2. Like, 35 pounds minimum possible (which is usually the upper weight limit of a convertible seat).

2: In Sweden, children sit rear-facing until they are three or even five years old, then move directly to booster seats. Yes, that would definitely be considered “weird” here, but guess which country has the better track record for children getting injured or killed in car accidents?

3: Just because a child’s legs are long enough to press up against the back of the seat does NOT mean they are ready to sit front-facing. It is not unsafe for them to have their knees bent while they sit rear-facing. They are only “too tall” for their seat if the top of their head is less than an inch away from the top of the seat. But because of the differences between torsos and legs and proportions, the WEIGHT LIMIT is the one to really pay attention to.

4: The safest place for a car seat or booster in in the center position in the back seat. It is 43% safer than the side positions. Obviously, this isn’t always possible if you have multiple small children in seats in a small car, but if possible, try to keep the most vulnerable passenger in the center section.

5: Even after your child meets the four years/40 pounds booster car seat recommendation, a high-weight seat with a five-point harness seat belt is still safer, ESPECIALLY if your child is simply “big” for his/her age (and thus not behaviorally ready for a shoulder belt, as I learned the hard way) or has any special needs. Noah has ridden in the Graco booster for short trips here and there in our second car, and only in the past couple months would I say it’s an appropriate seat for him. (Though I still vastly prefer the harness seat.) (Likewise, there’s more to consider than height/weight requirements if you think your child no longer needs a booster. Read about that here.)

6: Yes, your child should ride in a car seat in a taxi. No, holding them in a Baby Bjorn or carrier does not offer ANY protection from a crash. And if you absolutely must ride sans car seat or booster, sharing a seat belt or holding them on your lap is the most dangerous option of all. Sit them down, buckle them in using their own dedicated belt.

7: If your child must use a lap and shoulder belt, tucking the shoulder strap under their arm or behind their back is a big no-no. (Good to know: I rode this way for YEARS as a kid.) It increases their chance for serious injuries in the event of a crash.

8: Some car seats come with an “expiration date” of just five years. Best practice says to retire seats after six years. Normal wear-and-tear can compromise a seat, or the manufacturer might stop checking for safety or reasons for recall. And it’s usually worth investing in a new seat for new babies just to make sure they can benefit from all the latest safety improvements and innovations.

9: Don’t buy or use secondhand car seats. They might be too old, or recalled, or been in an accident and no longer safe.

10: Likewise, donating used seats is not always a great idea either, depending on the age of the seat or whether you can pass on the owner’s manual/instructions. Seats that have been recalled (for unrepairable defects) are technically supposed to be deliberately damaged beyond repair, to prevent someone unknowingly using an unsafe seat. Consider your car seat a worthwhile short-term investment, albeit one that depreciates pretty quickly.