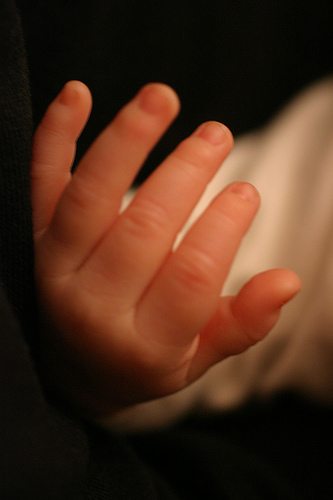 Love you, love all that you write! Your boys are adorable and it’s so much fun to read what they’ve been up to. I read in one of your recent Amalah posts that Ezra (your second son) is doing some baby signing.

My daughter is almost nine months old, she can wave bye bye and do pattycake, and so I think she’s ready for some signs. I’ve read about teaching signs, but I still feel like I have no clue what I’m doing. I would love to hear from you your “process” for teaching Noah (your first) and Ezra signs. I think hearing actual examples from an actual parent would be a lot more helpful.

Haaaaaaaa! Ha ha! See, I have to come clean and admit that I have no process, that I don’t really know what I’m doing either.

For Noah, I had ATTITUDE about baby sign language. Major, obnoxious, uppity attitude. I thought it was one of THOSE THINGS for THOSE MOTHERS. You know, the flash card mothers. The gymnastics-on-Mondays, Mandarin-Chinese-on-Tuesdays, advanced-outer-space-physics-on-Wednesdays…you know. The mothers who push push push and brag brag brag. And then Noah didn’t talk, wouldn’t gesture…and our pediatrician told me to teach him some sign language to make life a little more bearable while we readied ourselves for speech therapy.

So, for anyone looking to teach their toddler some sign language, I highly, HIGHLY recommend starting off with some Signing Time shows (also available at our affiliate, Amazon). (Spring for Series One if you really plan to stick with it, or are dealing with a speech delay, or have a money tree in your backyard; otherwise the first three volumes will give you a ton of useful everyday signs.) Noah had zero interest in mimicking us, but the instant I popped in one of these simple, colorful, cheerful DVDs and he saw children of all ages and abilities signing, with the concepts clearly illustrated with lots of bonus silliness, he picked up his first sign within 24 hours. He asked for milk, I immediately gave him milk…and it was like a light bulb finally went off and a connection was made. Communicating = getting what you want, when you want. TA-DAAAAAA.

And contrary to all the fretting naysayers (But why would he talk if he knows how to sign?), Noah’s speech grew right along with his signing vocabulary. Once he learned a sign, he was much more likely to attempt saying the word to accompany the hand motion. His speech therapist was astounded at how quickly he picked up signs and then the corresponding word.

So. Yeah. So much love here for the Signing Time series. Changed our LIVES, no exaggeration. I still get all verklempt just thinking about it.

Which means I spent the next couple years feverishly and evangelically pressing our DVDs on friends and family…and now don’t actually have anything appropriate left for Ezra (i.e. those first three volumes, or the baby versions). I planned to replace our Baby Signing Time shows — they’re similar to to “regular” series, only feature younger children and babies doing the signs, at a slower pace. (Noah was too old for them — he wanted to see the Big Kids.) But so many of my grand master plans, I just haven’t gotten around to it yet.

Instead, I just sign for Ezra. A lot. He’s a natural mimic (Noah was not), so half-assing my own signing curriculum was a little easier. (So…yeah. If your baby doesn’t mimic or use gestures, visual aids like the DVDs or books would probably be a worthwhile investment.) Otherwise, let’s all half-ass it together!

I chose two signs to start with: Milk and More. Check out ASLpro.com and scroll down halfway to find their “ASL for Babies Dictionary,” which features quick demonstrations of the most useful signs. Start with one or two, whatever you think your baby will likely get. I personally think the food and drink ones are the best place to start, since they are actual, concrete demands that you can easily and quickly fulfill, lightbulb-moment style. Sign BEFORE you give your baby her milk or more food — once she has it she likely won’t be paying much attention to you.

Once Ezra was about eight months old (i.e. ONCE THE CRAZY SCREAMING STARTED), I would sign milk from the time I got the bottle from the cabinet until I gave it to him (or when we were nursing, from the time I sat down and opened my shirt and until he latched on). Milk. Milk. Milk. Make sure you say the word out loud while you sign. After awhile, you can start pausing. Waiting. Giving your baby time to make her own request. While signing, I say, “Do you want some MORE?” And then I put the food down on the table and wait for a response. The first time Ezra made the sign, I am sure it was more of a mimicry thing than him actually understanding what I was asking. But it doesn’t matter — they mimic the sign (or some version of it), you repeat the word and sign again and clap and praise and IMMEDIATELY give them the milk or more Cheerios or whatever it is. Don’t pause and withhold until the point of tears, obviously…but you absolutely must give them the CHANCE to ask before swooping in with the Mindreader Mommy of Instant Gratification act.

The first sign or two will take the longest, and then (in my experience, with both of the boys) they start really getting the idea and are willing to mimic more hand motions, experimenting with them, seeing what happens after they do them. Now I sign…well, a lot. Eat, water, hot, ball, Mama, Dada, brother, etc. I do have the luxury of already knowing a lot of signs from our DVDs. (I swear, I learned signs quicker and easier from Signing Time than from HOURS spent on ASL websites trying to teach myself. I can still sign almost the entire Silly Pizza song!)

Basically: if your baby is willing to mimic you (waving, clapping, etc.) and seems to sort-of understand cause and effect, they are likely ready to learn some signs. They won’t be elegant, of course — Ezra’s “more” is basically a more flappy version of clapping, and his “all done” is easy to miss if you aren’t looking for it. While Noah (who was closer to 2 years old when we finally started) picked up signs literally overnight, it takes a LOT more patience with a younger baby. You may feel like a moron for a few months, miming a weird milking-cow-udder sign over and over again while your baby stares at you blankly. But with patience, persistence (and consistency — get your partner on board, for sure), you may walk into your baby’s room one morning to hear him wailing from his crib…and making that cow-udder sign back, clear as day. Like, holy crap, who let in this PERSON?