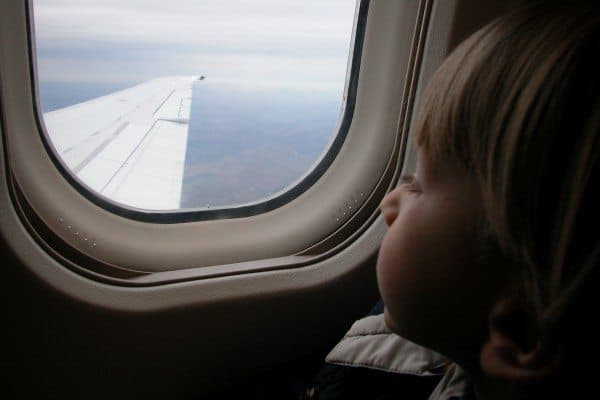 Airplane Travel With a Toddler

Congratulations on your soon-to-arrive newest boy! That’s so exciting! You make some darn cute babies!

I’ve been dragging my feet on asking this question but I finally have to ask for help: My husband, 2.5 year old son, and I will be flying from Portland, OR to Chicago, IL in about 2 weeks and I don’t know what to do to help make the trip easier for my son. The first and only time he flew, it was a disaster. I wasn’t prepared, he was 6 months younger, and it was just a mess. He was miserable, I was miserable, and the sweet, kind people on the plane were miserable.

Do you have any suggestions for how to make this trip go more smoothly? Toys, tricks, anything? We have a row of three seats to ourselves and we’ll be toward the back of the plane. We’re going to get a portable DVD player, some new toys that he won’t get until the day of the trip, his security blanket (of course), and some good, nutritionally-lacking snacks.

I have not, personally, taken my kids on that many flights, but the Internet advice I received lined up pretty well with what you’re already planning: a DVD player or laptop, a generous supply of new small toys, and an even more generous supply of crappy special snacks. I would probably qualify this list with a couple additional tips, including:

1) Making sure your son is okay with wearing the headphones for the DVD player BEFORE the day of the flight. This ended up being more of a challenge than we expected.

2) The toys should be checked and screened for noise-making ability ahead of time. We picked up some Dollar Store doo-dahs that we didn’t realize squeaked or rattled, and a talking toy Zurg from Toy Story 2 with NO OFF SWITCH and an easily-activated-from-inside-a-backpack button so we were the jerks at airline security with a bag that occasionally said stuff like, “WE MEET AGAIN, BUZZ LIGHTYEAR, FOR THE LAST TIME!” and “I. AM. YOUR. FATHER.”

3) The snacks should include stuff your son to help with the ear pressure thing. My kids aren’t gum chewers, so we brought lollipops, super-chewy fruit leather and sippy cups with straws. We purchased thick fruit yogurt smoothies at a stand near our gate and put them into the cups before boarding. If you have those homeopathic earache drops in your medicine cabinet, those might be worth tossing into your carry-on as well, just for emergency ear-numbing peace of mind. (Though you’ll probably want to apply them in the bathroom, if your kid is just as much of a fan of them as mine are, which is not at all. I brought them as a worst-case scenario sort of thing, but thankfully never used them in-flight.)

And on that note, the worst-case scenario probably WON’T happen, and you are soooo not doomed to repeat your last experience. Six months is a developmental eternity in toddler years, and this time your son might be way more interested in the whole AIRPLANE YAY!!! experience, or more apt to be lulled into a nice quiet video stare with the right movie or TV show. You weren’t prepared last time — and this time you’ll be more than prepared. Your flight could fall at a different time in his schedule and he’ll be more generally happy/accepting of the situation or put his head down in your lap and fall asleep. (Noah made it through take-off on his very first flight at age four, despite talking non-stop about going on a plane for WEEKS, then promptly passed out from all the excitement and slept straight through the first leg of the trip.) You just don’t know.

And so, really, my best advice is to proceed with everything you’re already planning, but to also focus on YOURSELF and ways to keep YOURSELF calm, so your anxiety about your son’s possible behavior won’t like, seep from every pore and rub off on him. (They can ALWAYS sense when Mama is worked up, you know?) Remind yourself that it won’t be YOUR FAULT if your kid makes a scene on the flight, that you’ll likely never see any of your scowling, judging fellow passengers again, and that believe it or not,  somewhere on the flight are people and parents who also were once in your shoes and understand.  Be optimistic and bring your own Kindle or iPod to enjoy once you get your son settled in with a movie or toys. Order a damn drink, whatever. It’ll be over in just a few hours.