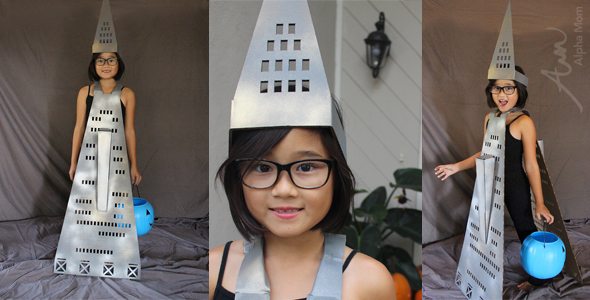 I know it’s a little late to be posting last-minute kids’ Halloween costume ideas but I thought we could squeeze these in for the industrious over-achiever who’s really handy with cardboard and an exacto knife (or for next year, of course).

Since we already featured two building costumes from the East Coast I thought it would be fun to make a couple of my favorite West Coast buildings into Halloween costumes, starting with the famous Transamerica Pyramid building in San Francisco. 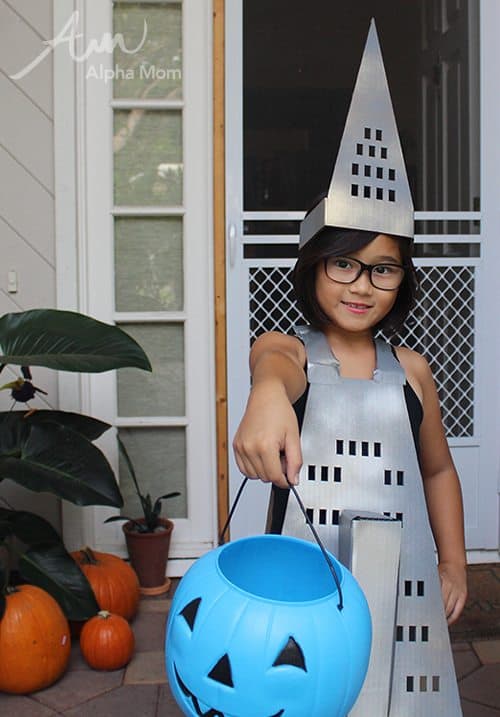 Like the previous building costumes I designed for this series, this kids costume is based on a sandwich board idea with a front and a back and few embellishments. Here is a diagram of how I created the pieces. Since it is last minute and Halloween is just around the corner, I sent the file to a local large format printer to save myself some cutting time (That’s a lot of windows! But please, if you’re industrious, knock yourself out or skip the cutting and paint on the windows.)

If you are going to line your windows with the tissue paper/glow stick after hours effect (like I did for the costumes for the Empire State and Chrysler Buildings:

How to make a Transamerica Pyramid Building Costume

After I had all my pieces cut, I scored the “wing” pieces that jut out of the front and back of the pyramid. Scoring is done by using the back side of the exacto knife and just cutting the top layer of the cardboard so it will fold on a straight line. (On the diagram, score where there is a dotted line.) Then I popped those pieces into their slots (slots are in pink on the diagram) and taped them just to make sure they were super secure for any rigorous trick-or-treating that might happen later.

For the straps, I attached two 10-inch pieces of duct tape between the top tabs of both cardboard pieces. Then I lined the straps with another piece of duct tape so it wasn’t sticky on the back side. The straps need to be at least 10 inches long so that the narrow top of the triangle can fit over your child’s head but if they end up being too long once the costume is on, you can always adjust with staples once your kid is inside. Of course those staples will have to be removed to take off the costume but duct tape is pretty durable and will handle a few minor repairs here and there. Worst case, you could always cut off the straps and make new ones pretty easily.

Next I spray painted everything gray and then added a faint mottling of silver. I let everything dry for a couple of  hours and we were ready to costume! Just slip the sandwich board part of the costume over a kid wearing all black and fold the headpiece around your child’s head. Close the head piece with a piece of duct tape in the back.

That’s it! If you want to get really fancy for after-hour effects, add tissue paper to the back of the windows and then add glow sticks! We opted not to go that route for this costume but you can see how it looks on our kids’ Empire State Building costume and Chrysler Building costume. 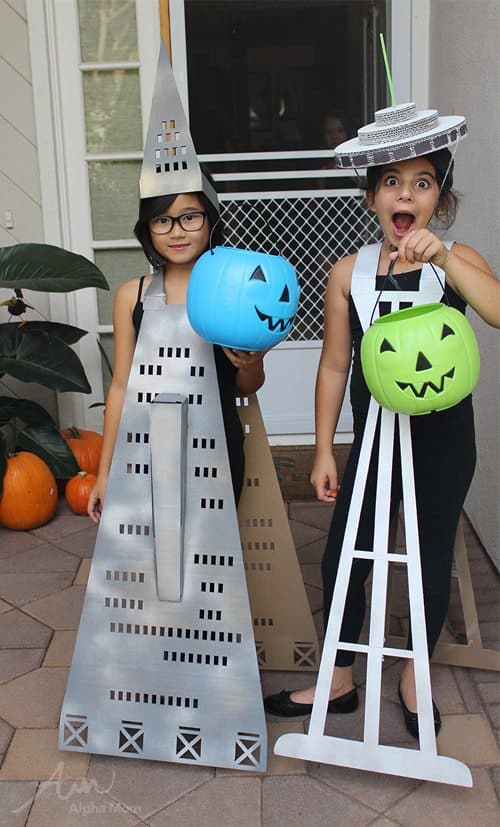 This is part three in a four part series of famous U.S. buildings Halloween costumes. Be sure to check out the others:

*Always spray paint outdoors or in a well-ventilated room.