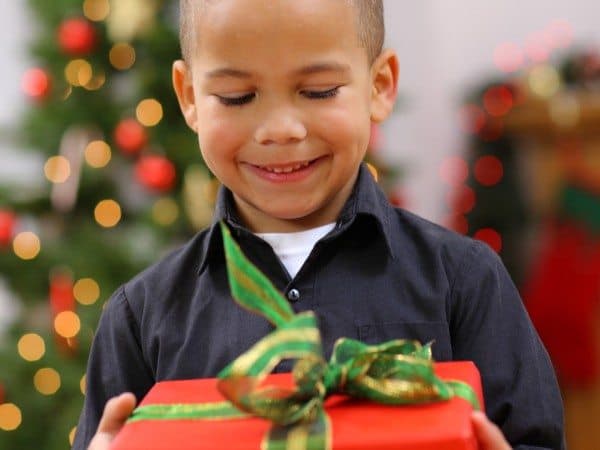 I never, ever thought I would be in the position where I would need outside advice, being intensely private, even though I love reading advice columns, but I have hit a wall with my husband and in-laws, and I need a dose of outside perspective. I have been reading the Advice Smackdown for a looooong time, and I appreciate the sensible advice you and your readers give, so I figured I’d give it a whirl.

My issue is this: my husband and I have two children, almost 3 and almost 5, and we all go to his family’s house on Christmas Eve for the whole Christmas shebang. We then host my family on Christmas Day, after having presents and breakfast with just the four of us. No issue with the logistics; this arrangement works swimmingly for all involved. The issue comes with opening presents on Christmas Eve. My mother-in-law insists on having presents from Santa under the tree–for everyone, not just the children, which was fine when my daughter was little, but now that she’s 4.5 and inclined to question everything, it seems to be taking away from the whole Santa myth to have to explain that he comes to Granny’s house a whole day early.

My husband agrees with me, so I thought talking to his mother about it wouldn’t be a problem . . . until he didn’t. He just kept putting it off and putting it off until I started to feel a little panicked and gently (so gently, and wishy-washily because I’m super conflict-averse) mentioned to her that it might be confusing for the children. Well, she cried, and I felt awful, AWFUL. So I again asked my husband to talk to her and make sure she was okay with it and smooth ruffled feathers, etc. And he still hasn’t.

My question is this: do I drop it because in the grand scheme of things it isn’t a big deal and I’m lucky to have a MIL with whom I get along, generally, even though she tends to overstep sometimes (this isn’t the only example)? Or do I pursue it because, after all, she had her chance to play Santa with her own children, and I want mine, dammit?

Gah. I feel ridiculous even making an issue of this, but I can’t help it! HALP!

There are times with generally oversteppy in-laws where I think you kinda have to separate out specific problems from the general oversteppiness. Yes, some problems work well as a Symbolic Line In The Sand, so you put your foot down and hope that the territory lesson will bleed over into other areas where they need to step back and let you be the parent. But sometimes WE are the ones who need to step back and take a deep breath and figure out if WE’RE the ones seeing a specific problem as part of a Big Overarching Pattern when really, it’s just an innocent difference of opinion that can be worked through without a lot of Putting Feet Down and Ultimatums and My Parenting Way Or The Highway.

And I usually find that holiday traditions tend to fall in that second category an awful lot.

In other words, I don’t think your mother-in-law is overstepping here (though of COURSE I believe you that she does in other areas; show me a MIL who doesn’t), and while I also don’t think you were 100% in the wrong to voice your concerns…I’m not sure what you honestly expected to accomplish. That she would suddenly abandon her cherished yearly tradition for both her grandchildren and adult children, no big deal? That she wouldn’t take your words to mean you thought she was RUINING Santa and CONFUSING the poor children all these years when she probably just thought she was being cute and kind of fun by writing “Santa” on the gift tags?

(I’m not saying that’s what you said AT ALL, by the way. I’m just playing the part of the sensitive MIL for devil’s advocate purposes here.)

I think the better approach here, instead of trying to preemptively predict what your daughter will question and what she will not (and bend the world around those predictions), is to simply get creative. Bend your Santa story, not your mother-in-law.

The best thing about the Santa myth is that it’s just that: A myth. A tradition that takes on many, many different forms and can be personalized for every family. Your husband’s family is now part of yours, so embrace it. Weave their traditions into your new family tapestry, blah blah blah. (And consider the alternative: rapidly anti-Santa in-laws who refuse to indulge in even the slightest talk of magic for whatever reason.) Improvise. Make up a story. Make it rich and magical and fun.

Child: Mommy, why does Santa leave gifts at Grandma’s on Christmas Eve?

Parent: When Santa knows that families celebrate Christmas on different days, he has the elves deliver presents early! Because Christmas isn’t just about Christmas morning with lots of presents, it’s about being with your family and people you love. Santa will always make it Christmas when families get together to celebrate.

Or weave a tall tale about Grandma being one of Santa’s special helpers, a bedtime story about a secret underground network of grandparents who help deliver Christmas presents even though Santa gets all the credit, and how all children who believe in Santa can one day work for him when they are old and help make Christmas for their grandchildren and nieces and nephews and little neighbor children next door, etc. (That one has the makings of a holiday TV special, if you ask me.)

Or — if there aren’t other children’s beliefs in jeopardy — just be honest and tell her that Grandma is “playing” Santa, because it makes Grandma happy. And that’s what really matters.

There are a LOT of things that are confusing about the Santa myth, frankly. By embracing the idea of Santa and Christmas magic, you are all but signing on for potential confusion down the road. (Not to mention the risk of a premature “shocking” discovery rather than the slow fade of belief as your child grows.) It’s a fanciful bit of make-believe that will routinely bump up against logic and the real world, and kids know it. So you never know when you’ll need to have a good answer to a tough question immediately ready: Why is Santa at the mall and not at the North Pole making toys? Why is there ANOTHER Santa ringing a bell at the street corner?  Why did so-and-so say Santa wasn’t real? Why don’t my Jewish friends get presents from Santa? Why are we putting toys in the bin for poor children? Won’t Santa bring the poor children toys, as long as they’re good?

Oy. As questions go, “Why do we get presents at Grandma’s on Christmas eve?” is a pretty easy one to tackle.

As for your husband…that’s almost a topic for a whole separate column. He sounds like he wants nothing more than to simply keep the peace and despises confrontation, even if it means agreeing with everybody and/or taking sides even when he really has no desire to take sides. He agreed with you that the presents were confusing, but maybe didn’t think it really was THAT big of a deal, and thus kept putting off talking to his mom, while hoping you’d drop it. Now the family peace HAS been disrupted and feelings are hurt, and he’s gone even more into ostrich-head-in-the-sand mode.

At some point, yeah, he’s going to need to pick a side and stand up for that side. Grow a pair, as the kids today like to say. At THIS point, though…since you’re the one who accidentally hurt your mother-in-law’s feelings, it’s probably best for YOU to be the one to go apologize and smooth things over. Yeah, I know. But it’s probably going to be better coming from you than him, especially since he’s making it pretty clear that he feels stuck in the middle and wants NOTHING to do with this particular holiday kerfluffle.

I have ABSOLUTELY said things to my MIL that I regretted, or wished I could take back. Oh my God, I’m sure soooo many of us have, so no judgment here. And it’s usually because I’ve gotten too focused on a bigger pattern of behavior and sort of…lose the forest for the trees, so to speak, and think some one-off thing is a bigger deal than it really is.

So, hypothetically speaking, if I ever accidentally made my MIL cry over the name on the holiday gift tags a few weeks before Christmas, I’d probably go into full pride-swallowing mode and backtrack pretty far. OF COURSE she can keep playing Santa if it makes her happy. OF COURSE. I didn’t mean to suggest that she should stop. In fact, we ended up coming up with an AWESOME bedtime story about the Christmas Grandparent Elves instead and it was great and I am sorry. Please let me know what we can bring this Christmas Eve, thank you so much for hosting, etc.

(Slightly unrelated, but Noah is seven now — a mere two and a half years older than your daughter — and I can tell he already KNOWS logically that Santa isn’t really real, but is instead choosing to believe and play along this year. Whaaat? Ugh. It happens SO FAST.)

More on Christmas and Santa: