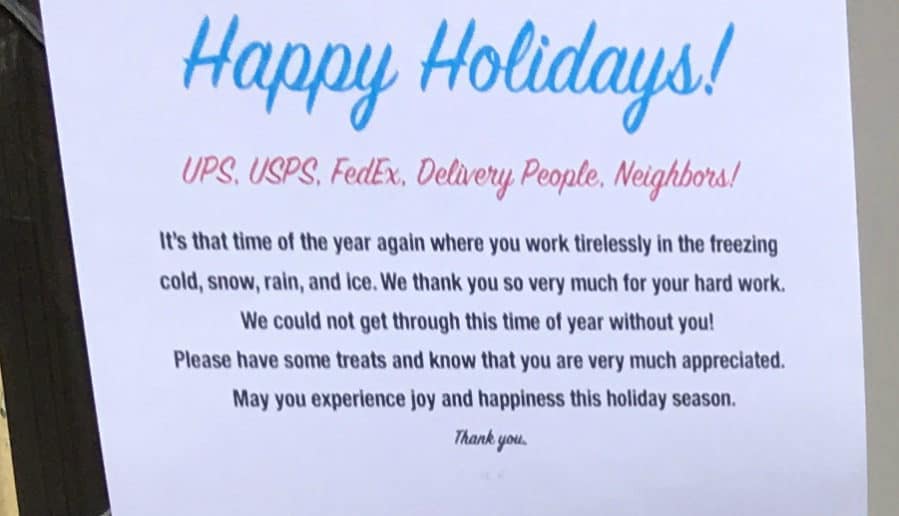 The Treat Tray Thief (an adorable and heartwarming holiday story)

December and January tend to be absolutely insane for our family when it comes to gift-giving. Between my husband’s birthday, my father’s birthday, Christmas, our anniversary and my birthday, the delivery people often visit our house on a daily basis. We order from Zappos and Amazon. We order pizza more often. (Tis the season!) We have wine delivered occasionally. During the month of December even our regular mailman will make two rounds all over town. It’s a very busy season for everyone and I imagine it can become pretty stressful as well. And with Amazon often outsourcing their deliveries due to the sheer volume, we never know who we’re going to see. Since it’s not feasible to give out cash to every person who drops off a package (btw- we do give cash to everyone we see regularly.) I wanted to come up with a way to thank everyone. After all, these men and women work in freezing temperatures, through rain, sleet and snow. They deserve a thank you of some sort. That’s how the “Treat Tray” came to fruition. 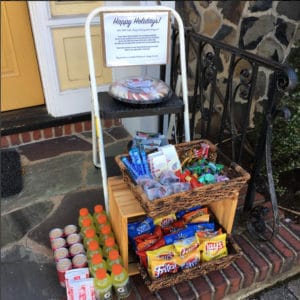 The first year I put one of these together, I included cookies, snack bars, even cupcakes. There were hand warmers, chapstick, and individual packages of tissues. I also left all the individually wrapped chocolates out in the open for anyone to easily grab. In other words: nothing was locked down, sealed up in a jar with a lid that requires opposable thumbs.

Why would I need to seal anything up? Delivery people took stuff freely. I had to refill it a couple of times. It seemed like an albeit small but nice enough thing to do. So after the first year, I decided the “Treat Tray” would become a yearly thing.

Year Two, brought much of the same. Just a tray full of goodies for the month of December. All was well on our porch.

Within a few hours of my having put out the Treat Tray, ALL the Ghirardelli chocolate squares were gone. I was bummed. No one had ever done that before. Usually, folks took a few things, maybe a handful, and moved on. But to take the most expensive chocolate on the tray? And ALL of it? Why not rob us blind of all the Reese’s and Mini Snickers since I can’t seem to stop eating them? Why not clear me out of the cheap stuff?

I’ll be honest, I wanted to cry. It was day one, two hours in, and all 25 pieces of the Ghirardelli squares had been taken.

Later that day, at around 1 PM, my husband and I headed out to take the dog for a walk. As we returned, and neared our front porch we saw an enormous squirrel looting our Treat Tray.

I mean, this squirrel was standing atop the step stool, furiously digging through the wooden tray of chocolates. He kept digging and digging and digging and then, interrupted and probably pissed off we caught him before he was ready, he TOOK OFF toward our backyard carrying everything he could.

As we got closer, it became clear that this squirrel had been VERY busy. In the 20 minutes we’d taken our dog for a walk, this little cute bastard had cleared out every piece of remaining chocolate. Gone was the junk chocolate, gone with all the Ghirardelli squares.

But I still couldn’t believe this is true. I still didn’t believe it was a squirrel that ran off with that many squares of Ghirardelli.  This seemed nearly impossible for even the most diligent squirrel. What would a squirrel want with all that chocolate? What was he doing with it? Building the most amazing nest, a palace made out of chocolate? Certainly he wasn’t eating it all. He’d have dropped dead. While I have no doubt the raccoons in this town could polish off that much candy, a squirrel? No way.

But then the following morning rolls around and as I headed out to the bus stop to drop off the kids, I spotted an unopened square of Ghirardelli chocolate on our driveway. I picked it up and gave it a closer look and there were tiny bite or claw marks on it. The plot thickens. When I got back from the bus stop, I combed the entire yard, because NO WAY. I still couldn’t believe this.

I found three more squares of Ghirardelli chocolate as well as a couple of Mini Snickers and Reese’s Cups. We had found our tiny thief.

That’s when the video surveillance began. I couldn’t help myself. I just found the whole ordeal absolutely hilarious. He cheered me up, even though he was robbing me blind. I couldn’t stop watching him.

This went on for days. I bought containers that required bendable thumbs in order to open. I put out food FOR the squirrel hoping he’d go for that instead. That didn’t work. I purchased a big jar with a lid I felt was way too heavy for a squirrel to lift. That didn’t work either. He lifted the lid, got to the chocolates and broke the lid. 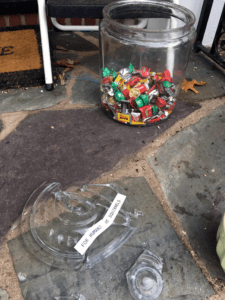 I could have given up, but I didn’t. I’m not sure if it was due to the amount of laughter and glee this little fella brought me, or if it was sorta like Bill Murray and the gopher in Caddyshack, but I kept on replenishing the Treat Tray right up until Christmas Eve. I would see this through and then probably not do it again.

Last spring, we had our yard redone, which meant taking down some of the trees that were damaging the yard and house. It had become so overgrown, our neighbors were pleading with us to do something about it and had been with the previous owners as well. So we finally made the leap. By removing the miniature forest we had growing all around our yard, that meant less squirrel action, which, yes, bummed me out a little bit because I do love animals—all animals. But it had to be taken care of.  So, this year, I decided to give it another try. And while my husband rolled his eyes and made cynical comments about all the squirrel food I’d purchased, I am determined. 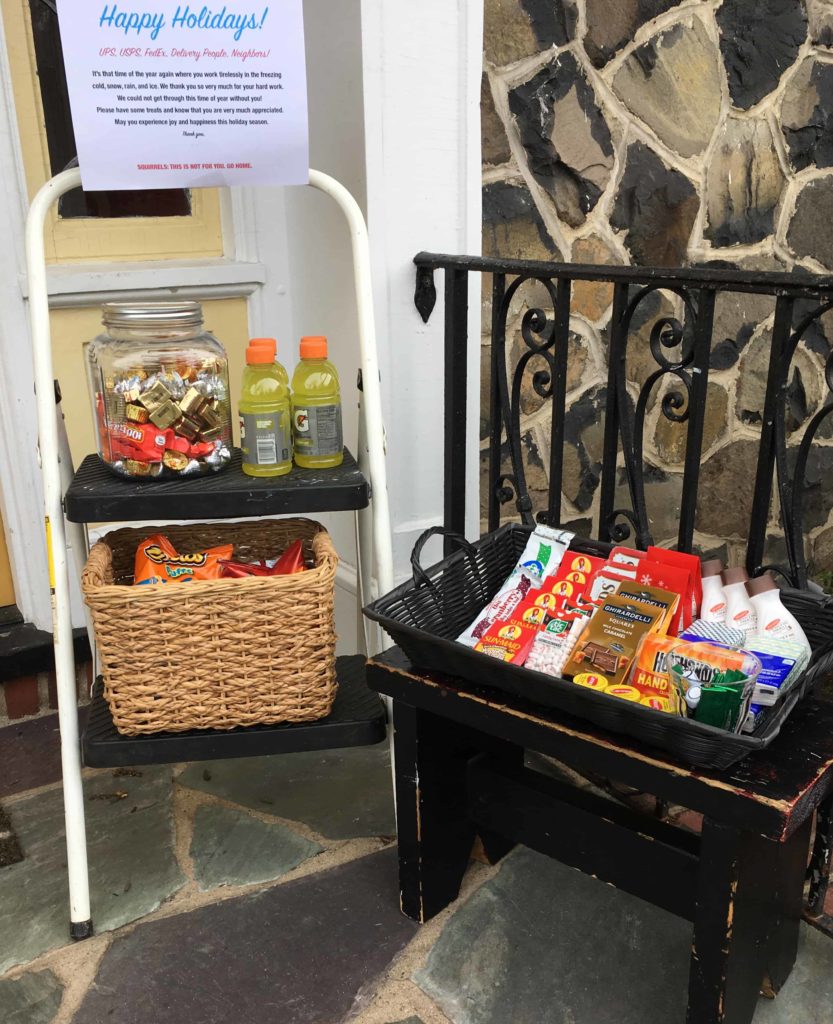 This year’s “Treat Tray” went out three days ago. I even added some Ghirardelli.

And so far, not one squirrel. And you’d think this would make me happy. But I gotta admit, it feels a little lonely out there.