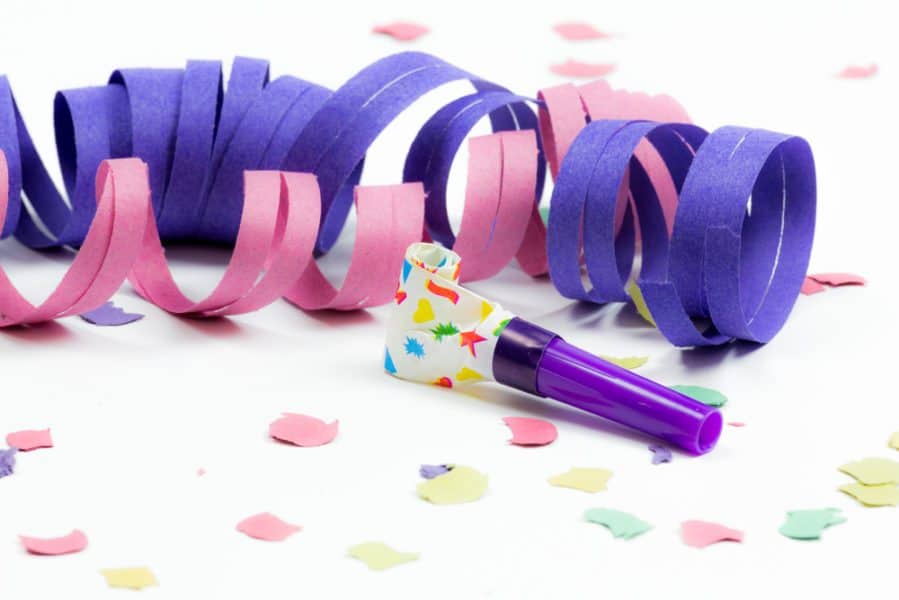 I should be getting ready for Christmas but instead, I want to talk about New Year’s Eve, because we’re throwing a party and I’m trying not to wait until the last minute to start planning, as I am prone to do. For the past few years, we have spent New Year’s Eve with the same group of friends and their families. Last year, we had 10 extra adults and 12 extra kids over. That’s 26 total people, including my family of four, in our 1,200 square foot house. I know it sounds like a lot of people in a small space, but it’s not really crowded if you evenly divide the space (about 46 square feet per person).

Unfortunately, the kids refused to stay in their allotted 46 square feet. You know how they are.

We’re lucky that our kids are getting older and don’t need constant supervision/distraction during the party — and even more lucky that they’re all pretty happy just hanging out together — but I still want to do a few things to make this night special. And since I’m saving approximately $6,000 by not hiring a babysitter on New Year’s Eve, I don’t mind spending a bit of money on crafts and favors for the party.

1. Start with a bang. I’ll be giving each guest a party cracker to open early in the evening. You can buy crackers online or at party supply stores, but we’ll be making our own, using Megan from Not Martha’s simple tutorial to help us along. I’m not entirely sure what will go in each cracker— traditionally, crackers have a paper crown, a small toy and a joke or fortune inside. Our will probably include a little candy for the kids and a fortune tailored for the coming year.

2. Dress to party. We’ll also be making party hats with the kids. The video, below, from Britt + Co, is a simple walkthrough for a basic party hat — you can use those instructions and then customize the hats for New Year’s Eve.

If you need a little more guidance or just written instructions, Oh Happy Day’s party hat tutorial includes a printable template. But I suspect, considering my mastery of the art of procrastination, that we’ll be buying hats at the party supply store and giving the kids stickers and maybe some paper garland to decorate their hats with.

3. Make a memory. I thought it would be fun to have each kid make a neat and easy keepsake, so I’m going to ask each of them to draw a picture of the best part of their year. (This is also a project that could take a lot of time, which is great when you’re just waiting around for it to be midnight.) It will be interesting to see what each kid chooses — I have a feeling my kids will remember how we had a port-o-john in the driveway for two weeks this summer while we remodeled our one bathroom. I know that was the highlight of my year.

4. Welcome the New Year. I’ve got a couple of fun things planned for the stroke of midnight. I love this simple homemade balloon drop from Modern Parents Messy Kids. It’s so easy — the balloons are suspended from the ceiling with pieces of colored netting — and so pretty. I think the kids will really enjoy it. And while I’m normally opposed to messy things — my kids have used paints at our house a total of three times in the last eight years — I think the sign of a great New Year’s Eve party is when confetti blows out of your heat registers for two months after the party. As such, I’ve put together some colorful confetti favors, complete with noisemakers (because kids just aren’t noisy enough!), for our event.

If I get started today, I can have this all ready by New Year’s Eve. Right?