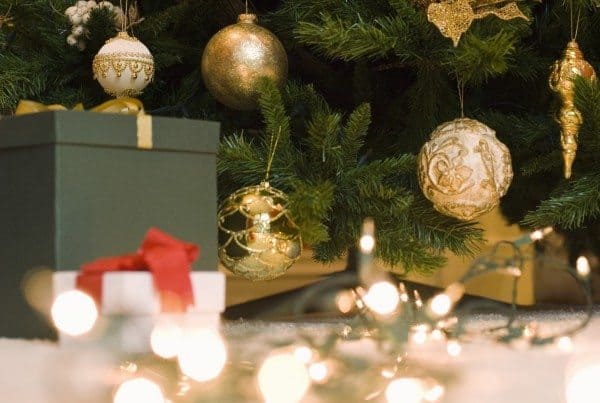 All They Want For Christmas

My children are pretty easy to shop for. Because they want everything. You can set them loose in a toy store, pointed in just about any direction, and they’ll immediately find the One Thing They Have Wanted For Their Whole Lives, Or At Least The Last Three Minutes Of It.

(Though I admit my five-year-old did present a small challenge this year by asking Santa repeatedly for one specific discontinued Thomas the Tank Engine set. That he somehow saw on YouTube, what the hell. I found the [toddler-aged] set for sale secondhand for about a bajillion dollars, only to realize that we already own a good three dozen Thomas the Tank Engine sets that he never, ever plays with anymore, so instead of instant gratification we went with a drawn-out campaign of Redirection and Reasons You Don’t Really Want That and Oh Look At This Mind-Blowingly Awesome Toy Instead.)

Anyway. I know you’re probably completely burned out on Gift Guides and such, so we won’t call this a Gift Guide. More like a few items that my children MAY or MAY NOT actually be getting for Christmas, I will never commit either way. (I mean, YOUTUBE. HE KNOWS HOW TO FIND TOYS ON YOUTUBE.) Call it a guide to a few really amazing toys guaranteed to blow the minds of your average two- and five-year-olds. 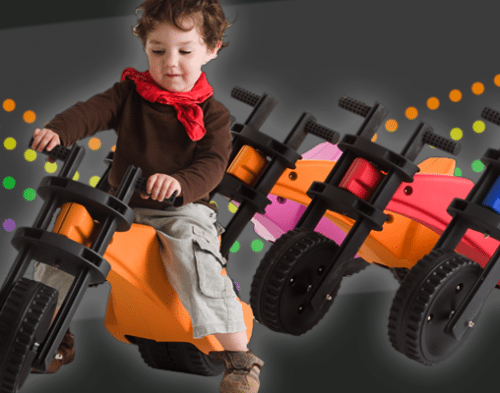 I’ve been fascinated by the many options for a toddler-friendly balance bike for ages now. Instead of a traditional tricycle or four-wheeled ride-on toy, the balance bikes actually help small children learn the fundamentals of bike riding from the start, albeit SAFELY. The results? Better balance, motor planning and bilateral coordination, plus an easier (and possible training-wheel-free) transition to a real big-kid bike later on. And all Ezra wants in the world is a big-kid bike of his very own. 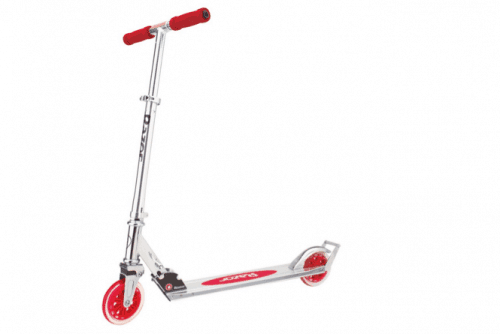 I came to the sad realization, recently, that Noah has simply outgrown his truly fabulous Mini Kick Scooter (by Kickboard). It was a great little starter toy that gave him months and miles of fun, but he is now too tall and too heavy for it. So it will now get stashed away in a closet until Ezra’s next birthday, and Noah will also move into the world of Big Kid Things, with a junior-sized Razor. I mean, MAYBE. If he’s good. And Santa feels like it. I have nothing to do with any of this.

(Don’t forget to go up a size on the helmet and pads, too.) 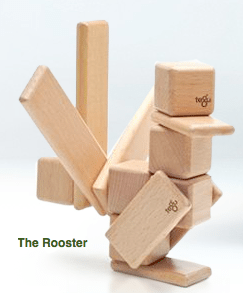 I first read about these blocks right here at AlphaMom, and had an immediate reaction of “holy crap, those are COOL.” Kids love blocks. Kids LOVE magnets. Parents love the socially-responsible story behind the company and the blocks and the added bonus of getting children in Honduras out of the dumps (literally) and into the school houses. Tegu sent me a set, which I immediately hid in a closet…until my kids fell asleep. Then my husband and I busted them out and got to building with them, and holy crap, these are COOL. (Update: because of the magnets, these blocks are recommended for kids aged 3+) 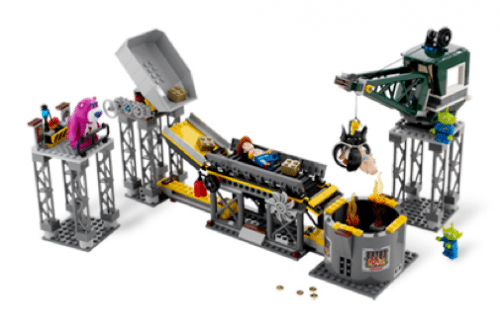 Aaaaaand on the other end of the educational, environmentally-friendly, small-business scale, we have…the omnipresent licensed-character Legos. Whatever. YOU try watching your preschooler sit on Santa’s lap and say that all he wants for Christmas is…”THE CLAAAAAAAWWWWW!” in a little alien voice, complete with a claw-like hand motion, and NOT buy it for him. Seriously. Try it. I totally sucked at it, because it was SOCUTEYOUGUYS.

THINGS THAT ARE JUST TOO COOL FOR WORDS: 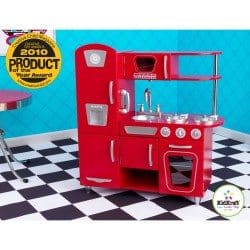 Yes, it’s true. We have so far avoided the purchase of the obligatory toy kitchen monstrosity, but no more. This is the year. Ezra’s our budding little chef and Noah wants to play “restaurant” and you know, I loved my own childhood kitchen from toddlerhood through grade school. I’ve always wanted one for my kids to love too.

Our biggest problem, as usual, was space. The toy kitchen would likely need to live in our actual kitchen, thus I refused to consider most of the plastic versions. We also didn’t want — you know — PINK. (Don’t even get me STARTED ON THAT.) Both boys (and I) feel DEEPLY in love with Pottery Barn Kids’ awesome red retro-style kitchen pieces, but oh! My God! The prices. I thought the wooden kitchen at IKEA was more our speed…until I realized that it didn’t include a refrigerator. (I won’t even lie — I saw that thing online and in-person but the fridge thing didn’t occur to me until we were practically standing in line to buy it.)

Enter our compromise: this adorable all-in-one retro kitchen from KidKraft. Winner of Creative Child Magazine’s 2010 Product of the Year award, and on sale for only 99 bucks. (It is on the small side, height wise, but given our space issue, we simply couldn’t commit to anything larger.) I’m not sure who’s more excited about Christmas morning anymore, me or my kids. Or…I don’t know. I’ve heard it might be a good one for them this year, but I certainly couldn’t say for sure.

Okay, now here’s the REALLY GOOD PART. Thanks to this column, I actually was offered a couple of my kids’ presents for free this year (a YBIKE and Tegu blocks). I still get kind of floored when this happens, and I always feel kind of awkward about it, because I can lather myself up into a nice froth of guilt over stuff like that pretty easily. Even though, DANG, who doesn’t appreciate a little help with the kid-spoiling around the holidays?