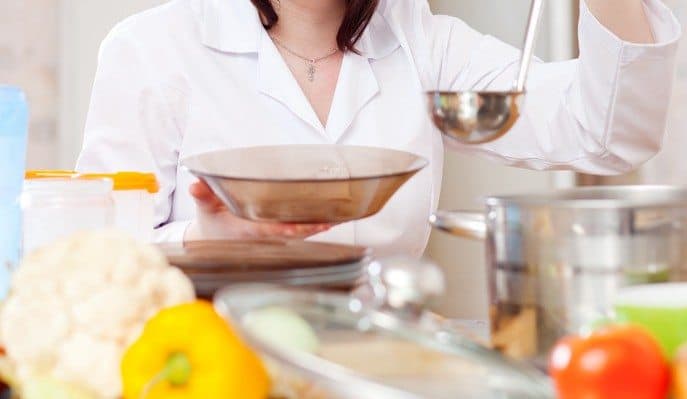 Three Soup Recipes You Should Try This Winter

We are firmly entrenched in winter, which here in the south means alternating bouts of bitter cold and endless rain. (No matter, pretty soon all of this will give way to the Season Of Endless Pollen, which is then followed by Welcome To The Surface Of The Sun. They should really have me write copy for tourism brochures, no?) The first round of cold weather sent me into my stash of chili recipes, and then once the rain began, I had to head into my favorite soups. Back when I still ate wheat, soups were an excellent excuse to eat fresh bread. Even without bread, though, there’s nothing quite like a big bowl of soup on a dreary day. Bonus: As long as you’re not going the cream- or bacon-laden route, most homemade soups are pretty healthy, cheap, and filling.

Break away from your standard chicken noodle and try mixing it up with one (or more) of our off-the-beaten-track favorites. 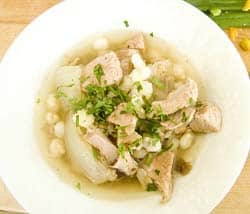 It was a little over a year ago that I first came across Helen Jane’s green posole recipe, and looking back, I can still remember my thought process. It went something like: Well that just sounds weird… but also kind of good… but also weird… and where do you even buy hominy, anyway? I think I was drawn in by the use of tomatillos—an ingredient I love but for which I don’t have a lot of recipes—and knew that Helen Jane had never steered me wrong on a recipe before. Plus, I had just bought a cheap package of pork shoulder and didn’t know what to do with it. Perfect!

My notes on this recipe: If you are leery of hominy, don’t be. Sure, corn treated with calcium hydroxide may sound a little… inedible… particularly if it’s not something you’re accustomed to eating. I’d never had hominy before I made this soup (other than hominy grits, that is), but to my delight I discovered that canned hominy is a decent stand-in for dumplings in terms of both consistency and soaking up the flavors around it. This was a major revelation now that I’m gluten-free and often missing foods that taste “doughy.” The hominy and pork are filling, but the broth itself ends up tasting light. In fact, it never fails that someone will comment that this posole tastes “bright,” and that’s spot-on. The jalapenos and cilantro and tomatillos infuse every bite with a burst of flavor that just makes the whole bowl taste like spring, somehow. It’s a perfect combination of flavors, and although Helen Jane suggests a variety of possible toppers, it’s the squeeze of lime that makes it perfection. Pro tip: If making this in a slow-cooker—which you should, because it’s easy and makes your house smell good all day—skip the sautéing and browning; just throw it all in the crock and enjoy. (That will also allow you to leave the meat in larger chunks, which will make them easier to fish out and shred later on, too.) 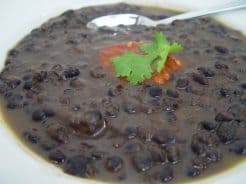 We eat black bean soup often—it’s one of those rare dishes that the whole family likes, and a vegetarian version means it works for everyone—and our standard version of it (beans/carrots/onions/tomatoes, blended smooth at the end, topped with a dollop of sour cream) is delicious and filling and perfectly serviceable. I went looking for a new recipe, a few months ago, after a meal out had included a cup of chunky black bean soup that was spiced with an aromatic mixture of ginger and cinnamon. It was different and I liked it. After an hour of quality time spent with Google, I settled on Emeril’s Black Bean Soup recipe as the closest thing I could find to the yummy variation I’d had. Much like the posole’s brightness, this recipe’s inclusion of orange juice and ginger make it a taste stand-out amongst more “traditional” black bean recipes.

My notes on this recipe: I changed a number of things here, starting with the fact that I believe very strongly in presoaking dried beans before cooking with them. I mean, Emeril is Emeril, and I’m sure he knows what he’s doing, but when I use dried beans, I soak them overnight. That said, I also used half vegetable broth and half water (instead of just water), because 1) I had it on hand and 2) I worried a little that pre-soaking meant I needed a little additional flavor going on to get the beans where they needed to be. Also speaking of flavor: this recipe calls for 1/3 cup of minced garlic, which is a lot of garlic. I went with a lot less (maybe 4-5 cloves, instead). We also skipped the hot sauce; I didn’t feel like this soup needed it. And (surprise!), I did the whole shebang in the crock pot, with no sautéing, because I’m lazy. Pro tip: Black bean soup (of any kind, really) is perfect when you’re using up ends of vegetables—you want to follow the recipe for amount of beans, liquid and spices, but then the amounts of everything else can be adjusted without problem. Have more carrots, less celery? That’s fine. Different color of bell peppers? Perfectly okay. Have other veggies you think might work? Go for it. 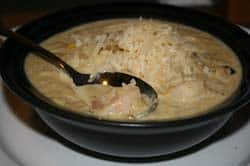 I know, I know, I gave you one of Stephanie’s recipes when I was doing my chili round up, too. I swear she’s not paying me and she doesn’t have any incriminating photos of me, either. I just really like her recipes (and crock pots, apparently). This fish chowder recipe is guaranteed to please anyone who loves creamy canned chowder, and this version will be better for you (and probably cheaper), too.

My notes on this recipe: Stephanie calls for a pound of white fish and 2 cups of shrimp, which will work just fine. Use any white fish you want, which makes this an ideal recipe for those days you come home from the supermarket with some fish you don’t even know how to cook because hey, it was on sale. Also, know those weird teeny little bay scallops they often have on sale at the fish counter that you don’t know what in the world people do with them? They’re a good substitute for the shrimp, if you like. We’ve never made this the same way twice (once I literally had three different kinds of white fish in there, because I was using up bits from the freezer), and it’s always been good. Pro tip: Want to skip the heavy cream? I’ve made this with light cream and even with half-n-half with good results. If you’re really virtuous, you can make it entirely with milk—when you go to add that last cup, put a couple of tablespoons of corn starch into your measuring cup before adding the milk, stir to remove any lumps, and then whisk that mixture into the chowder to thicken it without cream.

Mmmmm. Now all I want is a big bowl of soup and a good book… and for life to stop long enough for me to devour both in peace.