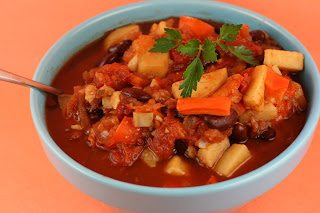 We’ve had a cold snap here in Georgia, this week—don’t laugh, the temps were down into the 20s!—which means that I’m all about warm comfort foods. The temperature drops and the crockpot comes out; that’s just logic.

Don’t get me wrong with these recipes, either, and think I’m not a fan of conventional chili. I love chili in all forms, and I don’t discriminate. The standard beefy-tomato-y-spicy type is a favorite ’round here, as well, and I feel like nearly everyone has a house recipe built on that general idea. (My husband works some magic with a version that includes hot sausage that isn’t for the faint of heart or taste bud.) But today I want to share three chili recipes our family loves that depart from the standard. Two are vegetarian/vegan, and one is such a flavorful concoction with turkey that you won’t miss the beef one bit, even if you’re a dedicated carnivore. We’ve found all three of these chilis to freeze well, so go ahead and make a double batch so you have some ready to go in the freezer.

If you don’t already know the fabulous Stephanie O’Dea, the tiny-but-mighty force behind A Year of Slow Cooking and author of three slow cooker cookbooks (her latest, 365 Slow Cooker Suppers, is just as good as the previous two), she’s the reason I love crockpot cooking. Let’s just be clear: Stephanie O’Dea is the reason I currently own six crockpots. (Don’t judge.) Girlfriend knows her slow cooking, is my point.

Stephanie’s vegan sweet potato chili recipe is perfection in that it’s great just as-is (not to mention easy and cheap), but it’s also amenable to adjustments based upon what you have on hand.

My notes on this recipe: We started eating this one regularly when my daughter first went vegetarian and I was scrambling to find recipes that would work for her but also satisfy the rest of the omnivores in the family. Paired with cornbread (I use the recipe I shared here, and just cook it in a cast iron pan), this fits the bill nicely. As I already said, make it just as Steph describes and you won’t be disappointed. Or mix it up; I usually go with half kidney beans, half chickpeas or black beans. I’ve been known to add frozen corn. If I don’t have a red pepper, I use green, or yellow… or I’ll add one of each. My kids aren’t huge on chipotle so I usually omit that in favor of a bit more chili powder. You’d be hard-pressed to get this one wrong, is my point. Pro tip: If you plan to cook it all day and you don’t want the sweet potatoes to disintegrate, cut them into even bigger chunks than the 2″ size described. 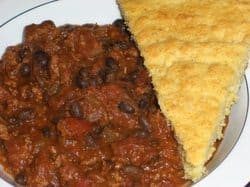 I’ll confess I was very skeptical of turkey chili before this recipe; everyone I’d tried prior to this tasted like… well… like “Hi, I’m healthier than regular chili, but also kind of sad.” On the other hand, I haven’t tried a single recipe from Karen Wise of Verbatim that I didn’t love, so I trusted her and tried it. This is the chili I bring to potlucks and I am always asked for the recipe. It’s different, it’s bursting with flavor, and best of all… you don’t even have to feel guilty, eating it. It’s pretty darn healthy, as chilis go.

The secret to this amazing turkey chili is the cocoa powder. It makes the dish vaguely mole-esque without screaming “chocolate! chocolate!” in an off-putting way. Don’t tell people what’s in it; just serve and stand back. They might not know why they love it, but they will love it.

My notes on this recipe: While Karen’s directions are superb, I (of course) prefer to make chili in a crock pot. I simply brown the turkey on the stove in a pan (or right in my Ninja Cooker) and then throw everything into the crock so that my house smells good all day long. The first time I made this, I didn’t have any bacon on hand, so I omitted it. The result was so delicious, I never bothered adding it back in. Also—though it doesn’t matter—I always make my own beans from dried, rather than using canned. (I make large batches in my crock pot, then freeze them in one-cup portions for later use.) Karen’s recipe is easily scaled either larger or smaller, and I just use two cups of (prepared) black beans per pound of meat. And this chili is also perfect with cornbread. Pro tip: It should go without saying here that you should use good-quality cocoa in this one. It really does make a difference in the final product. 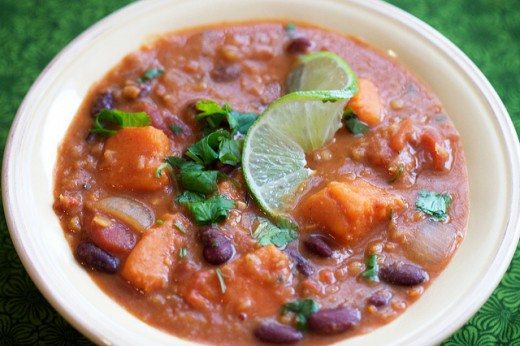 I already had a vegetarian chili recipe when this one came to my attention, but a vegan friend shared this and said, “Do you know this Post Punk Kitchen Blog by Isa Moskowitz? It’s amazing!” This friend has never steered me wrong when it comes to food, and in addition to Moskowitz having a critically acclaimed cookbook available, this recipe was bursting with all sorts of things I love—Thai influence, coconut milk, and protein-packed lentils. I had to try it.

My notes on this recipe: If you like Thai food, you will like this recipe. If you don’t like Thai food, or if you’re not a coconut milk fan, you would probably like this recipe without the coconut milk (omit in in favor of an equal measure of broth or water). Personally, I think the coconut milk is what makes this recipe special—it adds a silkiness and additional flavor note that makes the dish feel more sophisticated, if that makes sense. I make this one as written, though I also feel like the cilantro is optional if you’re one of those unfortunate people who believes cilantro tastes like soap. If you think you don’t like lentils, this is a great recipe to try; the lentils sort of “melt” and create a hearty texture, plus I think red lentils are milder than the standard green/brown ones. As with the previous vegetarian chili, this one is very economical. The most expensive ingredient is the red curry paste, but that tiny jar will make multiple batches of chili, so go ahead and buy it and enjoy. And I’m pretty sure this will work as a crock pot recipe, but I haven’t tried it that way yet. Pro tip: You’ll want naan to go with this one, and simple, homemade naan is easy to make.

I’m always on the lookout for new must-try recipes. Have a favorite chili I should do next?