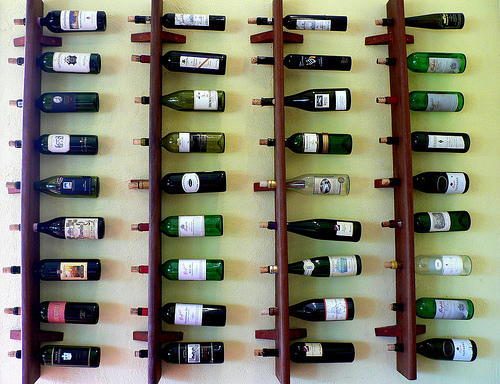 My husband and I have been trying to figure out the answer to a question for a couple of weeks now and for some RIDICULOUS reason, Gail Simmons at Food & Wine magazine doesn’t see fit to return my emails. The NERVE of that woman!

But here it is. A non-beauty and non-baby related Smackdown question. What is the proper etiquette when you are having friends over for dinner and someone brings wine? Are you supposed to open it? Save it? Teach it to dance a jig? I’ve been on both sides of this one and never know what the right thing is to do. Because when we’ve been guests to someone’s house and brought them wine, it may something we’ve picked up at the wine store on the way and I’m kind of curious to see how it is. But also, when I’m having people over for dinner, usually I’ve already picked my wines based on what I’m serving and what I know my guests enjoy and a random bottle may not fit in. Am I being rude when I don’t open it? Or am I being rude if I discover I have one less bottle than I thought and I open the gift wine?

Or… is it magical option number three? There IS no right or wrong and I need to shut the hell up and get back to work instead of sending emails about wine in the middle of the day?

The proper official etiquette is to save the wine for later, actually. The wine is a gift, and as hostess you may indeed go ahead and serve the wine(s) you already selected and save your gift for later. Likewise, when you go to someone’s house and bring wine, you are giving a gift, and it’s not something you should expect to get a little taste of yourself or dictate how and when it gets used. Do not feel offended when your bottle goes unopened. Your hosts have probably already chilled appropriate whites and/or decanted a red, so let them serve the wines they chose and like, be good hosts. If you’re the type who is going to get all bent out of shape because you brought a bottle of expensive vintage Bordeaux and your friends serve Yellow Tail instead, I would suggest maybe bringing flowers next time. (And, you know, brush up on your definition of “gift.”) (And I’m referring to a very nonspecific “you” here, as I’m POSITIVE none of the lovely people reading this column would get bent out shape over something like that. )

1) Your guest has asked ahead of time what to bring, and you suggest (or they offer) wine, and you let them know what you’re serving so they may pair it appropriately. In this case, you SHOULD serve their wine (even if you disagree with their selection, or it’s something you dislike), since it’s more of contribution to the meal.

2) If your guest arrives with wine and specifically says something like, “I thought this would pair nicely with the roast,” or suggest you open the wine they brought “next.” Technically, these are etiquette no-nos (GIFT! GIFT! you can give your friend a bedazzled reindeer sweater for Christmas, you cannot demand that she put it on right that second, or like, ever), but…eh. What’s another bottle of wine between friends? I also don’t think ANYONE would be offended if you DID open their wine the evening they bring it. You’re short a bottle, they’ve brought something really interesting, it actually DOES pair nicely with the roast…go ahead and open it, thanking them again for the gift. Conversely, if you bring wine and your host opens it, remember that once it changed hands, it was no longer “your” wine. Thank them for sharing.

What you should never do:

I hope it goes without saying that you never, ever take something home that you’ve brought simply because it went unopened. I’ve known people who have done this, with both wine and beer. SO RUDE. It’s like we’ve all gotten used to bringing consumables to people’s houses but haven’t ever thought of it as what it is: a host/hostess gift. You’re not allowed to hide the six-pack you brought to the kegger in the toilet anymore, people.

I admit I have occasionally offered to let people take alcohol home, like when they arrived with three six-packs in hand for a barbecue and so did three other couples. In that case, I made up sampler six-packs for everybody because I was afraid they might think we were all, “six months’ worth of free booze, SCORE!” So…technically re-gifting, or like handing somebody back the novel they gave me for my birthday because I didn’t get around to reading it right that night. But again, beer, wine, good friends, good times. Eh. As long as you, the guest, aren’t actively helping yourself to stuff that you’ve handed over as a gift, you’re in pretty okay etiquette ground.