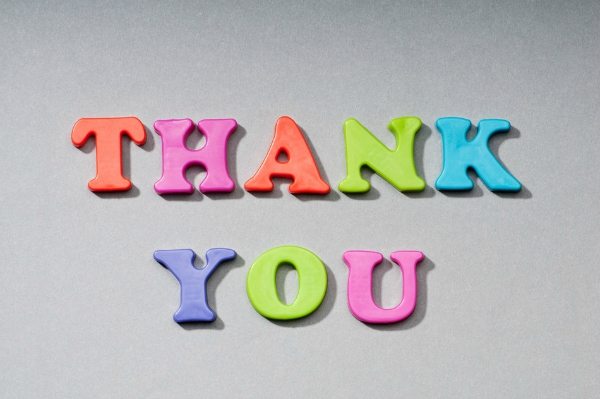 Is the Thank You Note Dead?

If you have kids, you know the kid birthday party drill. Show up with a gift, play, eat cake and go home. And then at some point, you receive some sort of thank you note in the mail. I always read the note (because hey, it’s not a bill or junk mail!) and show it to whichever kid attended the party.  And then I toss the note in the recycling bin.

But then I noticed something – we started getting less of them. Recently, I got an email thanking our family for a gift. Then for another party, a text. And I’ve even received a generic thank you addressed to an entire Evite list. I think Miss Manners fainted that day.

Is this the super efficient way to say thank you in the new millennium world? Or is it just rude? A part of me thinks the latter. I want to climb up on my soapbox and declare, “We must teach our children the proper way to say thank you. If they have the energy to open and play with a gift, then they can certainly write a thank you note! Or we can write it for them if they are too young to do it themselves!”

But here’s where I get super hypocritical. See this pile of Thank You postcards… 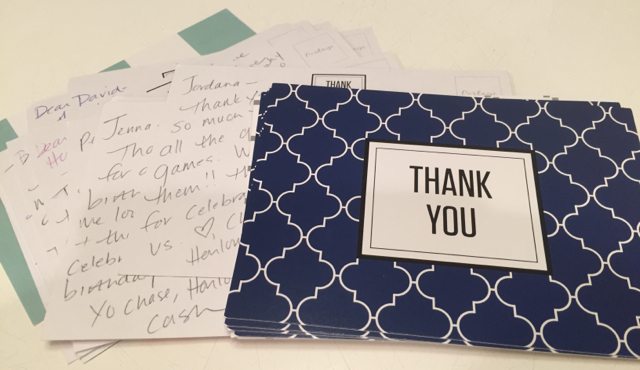 They have been sitting on my counter since my 5 year old twins’ birthday party. In May. I’m embarrassed to even count the months. Okay fine. It’s been five months. So for five months, I haven’t responded thank you to any of the people who generously bought gifts for my children. Gifts they are probably playing with RIGHT NOW. I even took all those postcards with me on a road trip from Florida to New York and back. And yet, there they still are – unfinished. I’m sure they had a nice trip though.

I’m obviously embarrassed. I mean, I once made fun of someone who sent a holiday card out in March (and that was only three months late). Plus I’m such a bad example for my older girls who I make write their own thank you notes.

In fact, I’m probably writing this article so I can avoid writing and sending those notes. Despite my complete lack of motivation to actually finish and send these thank you notes (and really, how late can I send them?!), I’m going to make a plea: Let’s bring back the thank you note.

There is something really special about receiving a card or note in the mail. It means someone  graciously took the time to write it, affix the stamp and drop it in the mail. And there is never a downside to saying, “Your generosity means a lot to me. So I took the time to say thank you.”

As for my own procrastination, I finally bought postcard stamps. So if you bought my kids a gift, keep your eyes on your mailbox. Better late, than not at all.

I’m of the opinion that if you said thank you in person, than there is really no need to say it again… If the gift was sent to you, please write back to confirm you received it and say thank you.

This is an good point that I didn’t address. Thanks for bringing it up. My kids rarely attend a party where the kids open the gifts while we are there. As a kid, we always opened the gifts at parties.

Ms Manners says that if you thank them in person, you don’t need to write a thank you. So, for birthday parties, you only have to write thank you notes if the child leaves before you opened their gift. All the more reason to keep opening gifts at the party, IMO.

Thanks for mentioning this! Yes, I think we should bring back opening up gifts at parties. Excellent idea.

I’ve never in my life given or gotten a thank you note for a kid’s birthday. I think that’s ridiculous to expect. Say thank you when they hand you the gift & move on.

What??? Being from a large family, I have attended a MILLION bday parties. No thank you cards- and presents are opened at the party. That’s half the fun!! It’s nice when someone calls or texts to say, “sorry you couldn’t make it, she loved the gift, thanks.” I think thank you cards are more of an adult thing and that it’s fine for the kids to just be encouraged to say thank you as they open their gift.

Sometimes I feel who gives the gift determines if I do thank you notes.  We just had our second daughter, and notes to my husband’s co-workers were the first ones we did.  Gifts of a nominal value, but the sentiment was there (also, note who gave us gifts so we can make sure to reciprocate in the future. . .)   Expensive gifts or college fund contributions:  always a thank you note, especially with older relatives who are more conditioned to expect such a reply.   Aunts and uncles (our BIL/SILs) not as much, partially as there is an ongoing… Read more »

In my family, only the grand-parents and godmother/godfather (be they religious or symbolic/non-dominational) give gifts to kids. Other aunts and uncles are not expected to give a present.

I never expect them and don’t think less of people who don’t send them, but I always send them to people I know will appreciate them. I hand-make my own cards, and putting in that extra effort helps convey gratitude more than just an in-person thank-you (which isn’t always possible anyway). Also it’s fun for me to make and personalize cards (and I work and have two kids and a house, so I do have to intentionally carve out time from life to sit down and do it). It’s worth it. The thank-you card isn’t dead. 😀

I havent sent out Thank You cards yet for my sons first bday back in August. I feel terrible that I havent, I could mention a million and one reasons/excuses as to why I have yet to send them out but it all boils down to I just havent set aside time. We did say thank you to everyone as we opened them with our son and tried to take personal time with each guest and say thank you. Is there a need to send them all Thank You cards as well?

We haven’t allowed gifts at parties since the girls were 3. Specifically because I suck at thank you notes and also suffer from PTSD after being the bride at a 300 guest wedding. We do gently used or new wrapped Book exchanges, donations to cancer or school charities, etc. Moms LOVE it because there isn’t the “oh shit” factor scrambling to pick up the gift en route and super low stress. We do insist the girls write thank you notes to family when they receive gifts. Mainly because I would suffer from PTSD if their grammas stopped buying all their… Read more »

We do thank you notes for birthdays. We also open presents during parties. My reason for doing so, is it’s important to me that my kids take more than just a second to think about how someone did something nice for them. We say thank you to the stranger at the store who opens the door for us. A friend who made an effort to come to our party, choose and wrap a gift, gets a little more effort on our part.