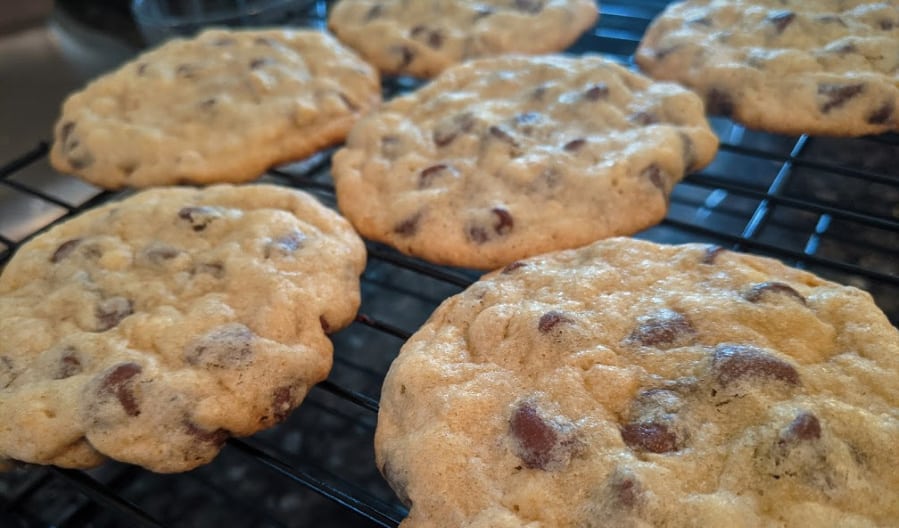 The Internet Made Me Do It: DoubleTree Chocolate Chip Cookie Secret Recipe

Let’s pause for a moment of sympathy for all the Brands™ out there, during these trying times. How do you remind people you exist? That your goods and/or services are still available for an exchange of cash money? How do you communicate that look, we know everything is a mess right now, we probably fired several hundred people yesterday, we might be the reason you didn’t get a small business loan, but Hashtag We’re All In This Together? And how do you do that without being super tacky about it?

A popular marketing tactic seems to be the Secret Recipe. The Internet is suddenly awash with never-before-revealed recipes! Every bored, wine-drunk chef on the planet has a YouTube channel! And it makes sense. We’re all at home, stress-baking up a storm, desperate for activities that kill an hour or two, and obsessively checking our Instacart orders because they keep randomly removing all the unsalted butter.

(Although I was VERY underwhelmed by McDonald’s “recipe” for the Egg McMuffin. It’s an…egg, with a…sausage patty, on an…English muffin. Wow. Never would’ve figured THAT one out, guys.)

And thus, the DoubleTree Chocolate Chip Cookie briefly became A Thing. “For the First Time, DoubleTree by Hilton Reveals Official Chocolate Chip Cookie Recipe so Bakers Can Create the Warm, Welcoming Treat at Home” sang the press release. Twitter lit up, Facebook rejoiced, and the news cycle was momentarily distracted by Something Nice For A Change.

I, personally, had never heard of the DoubleTree (by Hilton) Chocolate Chip Cookie, much less tasted one. I don’t believe I’ve ever stayed in a DoubleTree (by Hilton) hotel, and was entirely unaware that you maybe got free cookies if you did! I also don’t believe I’ve ever seen a chocolate chip cookie recipe that included both lemon juice and rolled oats, so I was…intrigued.

(This post is absolutely, 100% NOT sponsored by DoubleTree [by Hilton], in case you had any lingering doubts.) 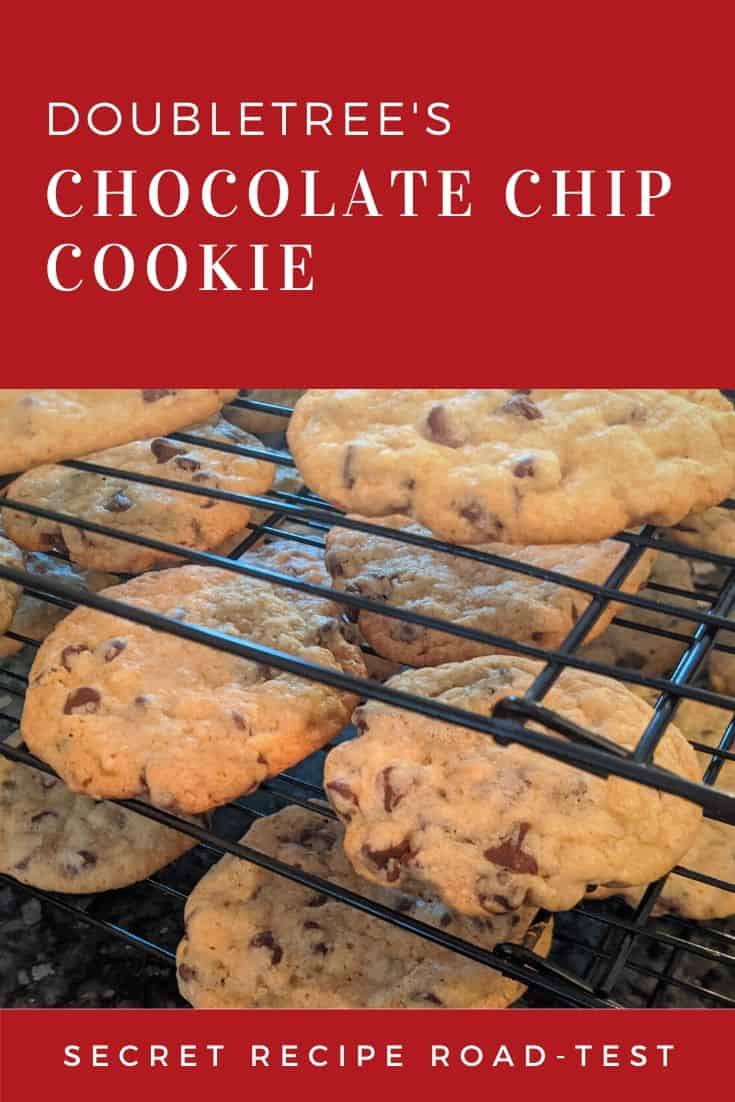 I decided to make a batch last, last, last, last…Friday? I think? Or maybe Saturday? Thurwedusday? Who can even say anymore. The main thing you need to know is that it was not a good day. We’d been quarantined for a month at that point, I’d gotten some bad job-related news, I was really stressed out, and probably should’ve opted to make a loaf of bread instead. At least I could’ve punched the bread.

Anyway, let’s do this. 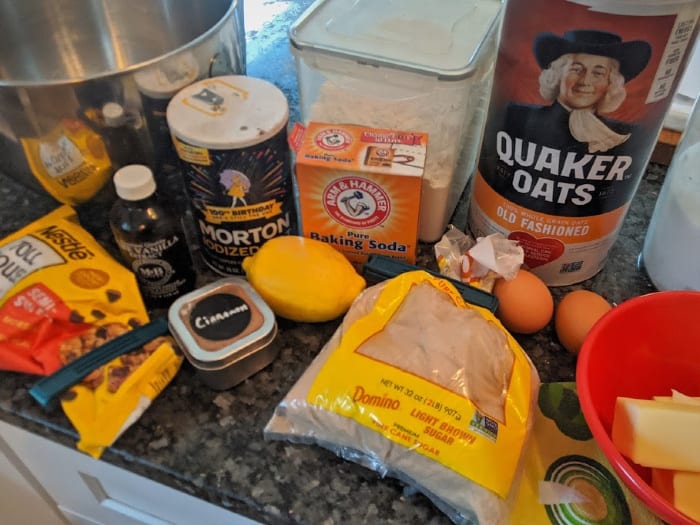 I’m already kind of mad at this recipe before I’ve started, because two sticks of unsalted butter means I am using all the unsalted butter that remains in my house. I’ve only been able to get salted butter, and not even good salted butter, but the cheap kind that tastes kinda weird and funky. I decide not to make the swap and whisper menacingly that you better be butter-worthy, hotel brand™ cookies.

1. Cream butter, sugar and brown sugar in the bowl of a stand mixer on medium speed for about 2 minutes.

Easy. Peasy. Done. If you don’t have a stand mixer this recipe could totally be whisked by hand, IMO. (Also please excuse my filthy stand mixer. She’s really struggling with her self-care these days.)

2. Add eggs, vanilla and lemon juice, blending with mixer on low speed for 30 seconds, then medium speed for about 2 minutes, or until light and fluffy, scraping down bowl.

Juicing an entire lemon for a mere 1/4 teaspoon gets me halfway to enraged before I remember that I have a jar of homemade preserved lemons in the fridge that can always use more fresh lemon juice. I apologize to the recipe for overreacting and feed my precious lemons instead.

(If you’re not sold on this cookie recipe, preserve some lemons instead! It is easy and they are delicious in many, many things.)

My dough is indeed, light and fluffy. Perhaps the Internet has not lied to me, again, this time. 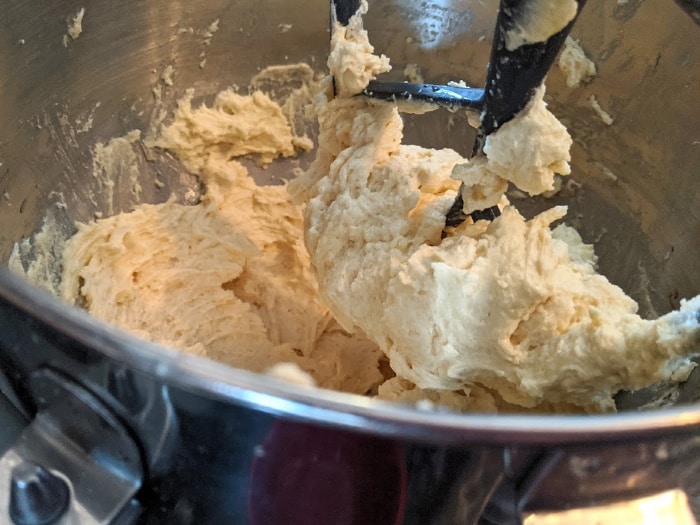 At first I was loving the low-key “just measure and dump ingredients into the mixer as you go” vibe until I got to this step. It took me much longer than 45 seconds to measure out the flour, oats, baking soda, salt AND mentally grapple how much a “pinch” of cinnamon is. And all the while my brain is screaming DON’T OVERMIX at me but I’m afraid to turn the mixer off because it says it’s supposed to be on low while you add the ingredients and aaaaaahhhhhhheeeeiiiii.

Did I overmix???? I don’t know!!! Prep your dry ingredients first next time, ya mise en place doof!!!!

4. Remove bowl from mixer and stir in chocolate chips and walnuts.

I do not add walnuts because I do not particularly like nuts in cookies. Also I do not have any. So.

5. Portion dough with a scoop (about 3 tablespoons) onto a baking sheet lined with parchment paper about 2 inches apart.

LIES! Watch the video of the recipe, and you’ll see that the dough scoops actually need to be shaped and flattened vs. just dumped on the baking sheet like snowballs.

I also can’t shake the feeling that I should chill the dough first, but neither the written recipe nor the video include that step. So I put my trust in a hotel chain’s press release and head straight to the oven. 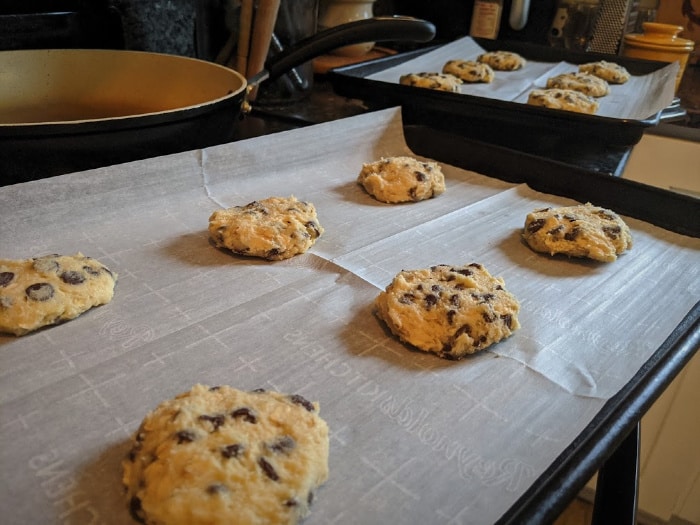 I forget to rotate my baking sheets halfway through for the first batch, and because my oven is absolute garbage the bottom rack cookies are done after 20 minutes and the top rack cookies need another 3 to 5 minutes. But I end up leaving them in there for almost 8 minutes before I realize I’ve accidentally turned the entire oven off, rather than just the timer. (Because it is garbage! It shouldn’t be so easy to do that! Now I’m angry at everything!!)

7. Remove from oven and cool on baking sheet for about 1 hour.

What? This seems overly precious, especially since you can only fit six cookies per baking sheet. So unless you have a lot of extra baking sheets or an industrial-sized oven, a full batch of 26-odd cookies with an hour of cool-down time for each batch of six to 12 would bring the total recipe time to… 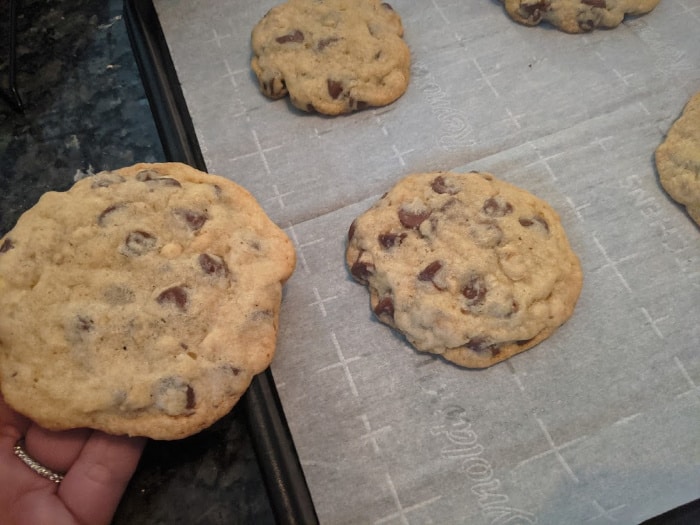 I refuse to indulge this nonsense and immediately move the cookies to a cooling rack. We’re living through a global pandemic, hotel brand™ cookies. We all have to make sacrifices.

The second batch goes in after chilling in the fridge for 30 minutes and are much easier to shape and flatten (HMMM) and don’t spread nearly as much. The third and final batch got a second 30-minute chill sesh in the fridge, but came out exactly the same as the first, un-chilled batch. I DON’T KNOW. MY OVEN IS GARBAGE. 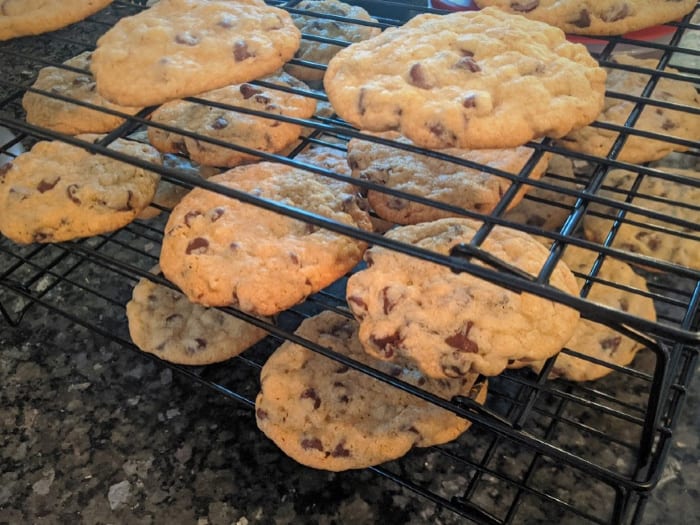 Overall, my cookies seem much lighter and flatter than the Official Photo. Are they actually using dark brown sugar? Chilling the dough overnight? Did I under-pinch the cinnamon? Take them out too soon? Did my hatred of nuts in cookies Ruin Everything? Since I’ve never seen or tasted the Official DoubleTree Signature Chocolate Chip Cookie I have no point of reference to know if I’ve screwed something up. I figure I should just go ahead and try a cookie.

I got 30 cookies total. I bagged up a few to leave on the porch (along with a loaf of sourdough and some blueberry muffins; the stress-baking is REAL, you guys) for our new neighbors. They moved in two weeks ago and we’ve been unable to probably introduce ourselves. I ring the bell and walk away, then end up shouting greetings/you’re welcomes at them from their driveway. They have two boys, the same age as my two youngest boys. That’ll be nice! Someday.

The cookies vanish from our cookie jar at an astounding rate. My kids LOVED them. Couldn’t get enough of them. They were big and tender and satisfying and while I have no idea what the lemon juice actually accomplishes, I will not argue with it. I made a second batch two days later when Instacart finally delivered my order and included the unsalted butter. 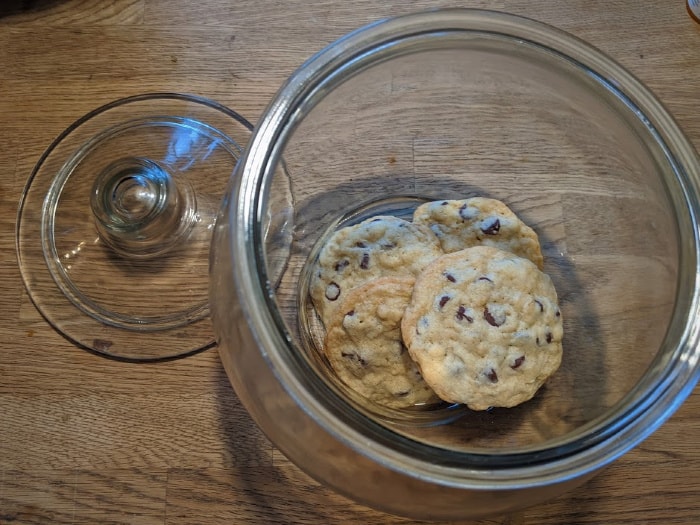 Five days and 60 chocolate chip cookies later, we’re down to just four.  I’d make more but I’m out of chocolate chips and running low on vanilla and granulated sugar. Our school district finally started distance learning this week but it still doesn’t seem like much “learning” is happening.