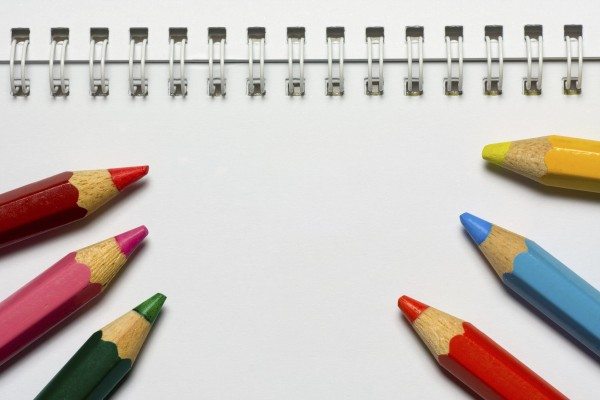 Draw Your Story: the Illustrated Journal

So many of life’s best moments don’t photograph well. The light may be too dim or the kids will run off before you can grab the camera. Or maybe if you were to go pick up the camera, you would disturb the moment and miss the whole thing.

I saw the most beautiful notebook the other day. It was a personal journal a mother had made, and it was done in a way so her two five-year-old twins could enjoy it immediately.

There was no waiting for pictures to be printed or supplies to be purchased. There were no photos softened or enhanced or tinted in sepia tones. The pictures were done in crayon, as stick figures in fact, drawn hastily in five-minute moments at the end of the day. 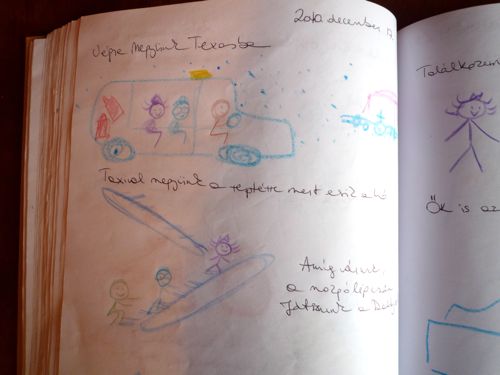 It was amazing. The notebook wasn’t made to look good and impress adults, it was made for her children’s benefit and from their perspective. It was made of notes scribbled down before they were forgotten. It was lovely, filled with the real-life entertaining stories from what the family did together: going to the playground, riding in the car, and hiding under a blanket from a thunderstorm. It even had the stories that wouldn’t fit in a baby book, like when they behaved badly and mom got mad and they got in trouble.

The action of writing and drawing transforms stories into memories, and these stories are what the family often reads together at bed time. They read about when daddy pretended to be a sea monster at the beach or when they climbed a plum tree. 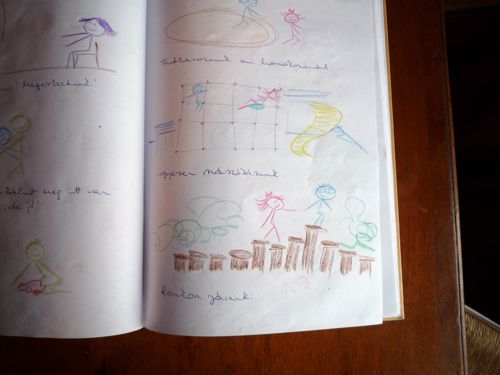 Scrapbooking often turns into photos and stickers and grommets and the sorts of decorations that delay us from actually putting anything down on paper. It’s the serious keepsake that involves planning and an investment of time and money. While the results are often beautiful, it requires free time that doesn’t happen until much later when we rely heavily on memory and the hopes that our photographs turned out well.

Drawing something, especially when you can’t draw, takes more risk, but the results can be really special. Even when you just use stick figures. 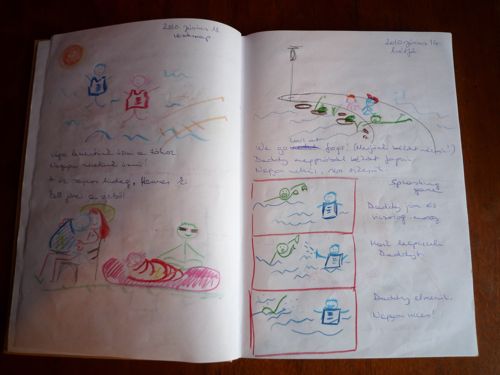 I asked her, “How much time does this take you?”

She said she spends about five to eight minutes drawing a story on a page, and she can work on it anywhere. I looked at the drawings that were so basic but still managed to convey the stories in such a loving way. I noticed that she always drew the characters the same way: the son was always in blue, the daughter in pink. Daddy was green and she was red. I admired the curly shapes of her handwriting. It wasn’t high artistic talent, it was the way it was handmade that made it so wonderful. And maybe her children will follow her example to tell and write and draw their own stories.

If you feel like you want to make a keepsake for your children but you don’t have the right camera or enough money for supplies, see what you can do with a few sheets of notebook paper stapled together and a box of crayons. After all, that’s what we give our kids to help stimulate their creativity. Let’s create with them. They’ll love being the heroes in the stories that you create.

How do you save stories for your family? 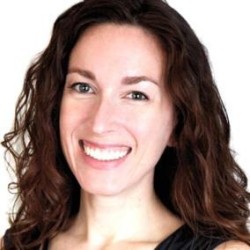