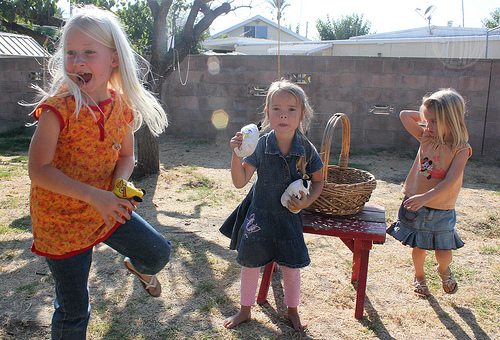 What do you do when when you really want to play Angry Birds like all the other kids but you don’t have access to a smart phone or an iPad or even a computer? You invent your own version of course! That’s just what some children of a friend of mine did and it was so ingenious, I had to write about it here because I know you all would love it just as much as I did. You can buy Angry Birds plush toys here that work great or you can make them like we did.

You can get as elaborate or as simple as you like. If you don’t sew, just fill some plastic bags and tie them off with rubber bands and feathers at the top. If you like to sew, you can get crazy with hand-stitched felt beaks and realistic eyeballs. I fall somewhere in the middle with my sewing skills so I made some simple shapes, added felt feathers and used iron-on paper to create their distinctive angry faces. If you would like to copy me, feel free to print out their faces here. (And here’s a bigger chicken version here if you want to make him to scale.)

You can fill your bean bags with beans or lentils or even popcorn. If you want to make them washable, you might want to invest in some plastic pellets that can be found at any fabric or craft store. Sew them up and you’re ready for action. Well at least the first part of the action. The next part is setting up the pigs and their lair. We used mini pumpkins for the pigs and cut out faces to glue-dot to them. More printables! I’ve got you covered. Of course you could sew little pigs here too but mini pumpkins are handy and we had some anxious kids who just wanted to play already when we set this up. Next, we created the pig’s lair. Having an addiction to online shopping or just a decent collection of packaging supplies can come in handy here. Small boxes for the win! We tucked the pumpkins into little spaces between the boxes and the game was ready to begin! Kerplowie! Kabamo! Ker-smasheroo! Who knew knocking over box towers could be so much fun?! Take that you egg-stealing pigs! So this went on for quite a while. Each round becoming more complicated with box reinforcements and egg-stealing strategies. I say leave this part to the kids. They always make up their own rules anyway. It’s all a bunch of fun and with this game more than your thumbs get a work out. I can see this easily spinning off into a whole theme party. Who says you have to have a smart phone to have all the fun?

p.s. We love you Angry Birds. We’ll take this post down if this bothers you. We’ve just made this craft because we wanted to keep the Angry Birds party going.