Teaching Your Kid how to Ride a Bike

I have two children, a very vague understanding of statistics might suggest to you one of them would be more physically inclined than the other. Apparently I am so very non-athletic there are some very strong ‘non physically inclined genes’ countering my husband’s soccer playing, marathon running genes over here.

My son is 6 and my daughter is almost 9 and neither have mastered the bike or acquired the desire to ride it. In fact, after our first weekend of no training wheels you’d think my kids simply wanted to see their father sweaty and out of breath. 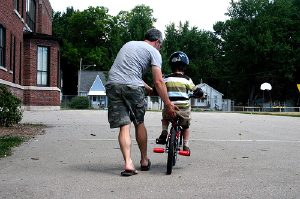 I don’t say this to alarm you but my husband is constructed almost entirely of titanium and runs marathons for “fun”. For most people “Running A Marathon” appears on their personal List Of Fun after “Having My Eyeball Plucked Out By Rabid Squirrels*” (Or its equivalent.) Still, running next to the kids on their two wheeled bikes up and down the concrete coated him in sweat and left him uncharacteristically breathless. It’s no wonder some parents choose to outsource the task of teaching a child to ride a bike.

An idea I found utterly absurd until I spent an afternoon running next to my daughter’s bike listening her say over 1000 times, “Don’t let go.” There has to be a more patient soul out there to help her. But alas, it’s up to us to not only birth these little creatures I also have to teach them to ride a bike. 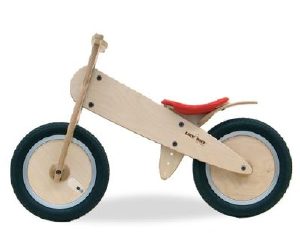 So I searched the internet looking for ideas. First a stop at ParentHacks, which I read daily and thought, “Gee, how could Asha miss this topic.” But she didn’t, of course. The major consensus there was, try focusing on balance first, adding the pedaling aspect later. Some mentioned the Like A Bike for this purpose, a very small easy to manage bike without pedals to help small children gain a sense of balance on the bike. Another (cheaper) suggestion, the RatzFratz running bike. Cheaper still, use this tutorial, though it looks a bit complicated, to pull the pedals off your child’s current smallish bike. 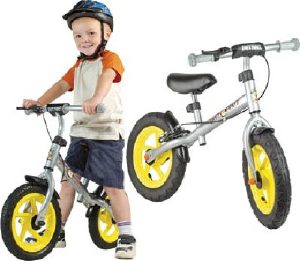 Just like I thought outsourcing the job of teaching my children to ride a bike was ludicrous, I also thought the Balance Buddy was yet another in a long line of silly products parents believe they must have but which are actually entirely extraneous. However after breaking my back 3 times while running crouched over next to the kids on their bikes last weekend and watching my robotic husband become breathless from the activity, I think an easy to grasp handle is in order. Do me a favor, crouch down and start running around in circles. See? There’s a reason Olympic runners don’t crouch down and run: It’s really hard. 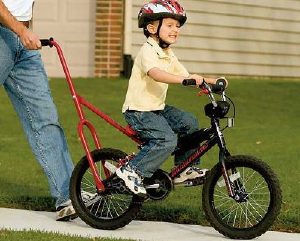 I’ll keep you posted on our progress. We bought the kids two wheeled bikes a week ago and have taken the training wheels off their original smaller bikes. They’re currently trying to get a grasp of ‘balancing’ while I try to repair my back and wait for our Balance Buddy to be shipped.