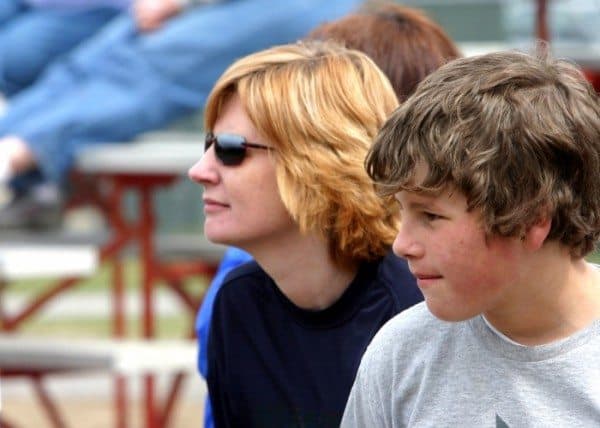 When the Kids Interfere with “Your Shows”

I remember when I was a child my grandmother had certain programs on television that she liked to watch.  She would go through the TV guide and write down everything she wanted to see that week.  She referred to them as her “shows.”   Then she would post the list on the front of her refrigerator with one of the many magnets that were used to hold photos of the grand kids.  That was some dedicated TV watching there.

Of course being little kids, we would laugh.  The same way we once rolled our eyes about comfortable shoes, cellulite, and fiber in our diets.  I still have not crossed the abyss into knee high stockings, but I never say never anymore.

Fast forward to my last two years of high school when I would stay home every Friday night to watch Miami Vice in all its 1985 glory.  Just who was laughing then, huh?  The high school boys who couldn’t understand the appeal of Crockett and Tubbs in their sockless loafers, sherbet colored blazers, and white linen pants, that’s who was laughing.  Also, it is probably why I never had a date.  If only the VCR had been invented and someone in the world was able to figure out how to program it to record.   I know that in my family none of us were ever able to figure out how to make the VCR record the shows that we wanted to watch.  We were such a cliché.

Fast forward again to present day, I now have “my shows.”  I call them that without a hint irony.  Luckily technology has progressed so that I never have to stay home and miss all the fun in order to keep up with my favorite shows.  Which is a good thing since my children would never let me stay home parked in front of the television.  Most evenings find me shuttling back and forth between various activities and sporting events in which my children participate.

I try to set my DVR in advance, but often I forget.  Or I realize that a new season is starting and I am trapped far from home and my DVR.

So, when I recently discovered that I can control my DVR from my mobile phone, I was elated.  Football game running late?  Stuck behind the chatty parents in the carpool line?  Last minute stop for must-have supplies for a school project due in the morning?  Have a child tantruming in the grocery store that they are missing their yearly viewing of The Grinch?  The times I need something like this are endless.  Yes, need.  Now I can simply log on to my mobile device and set it to record.   It makes you wonder why no one had thought of this before now.

If my grandmother were still alive she would be proud of my dedication which now rivals hers.  I can imagine her calling me, “Christine, can you do that thing with your phone and record my shows for me? They are all on so late now.  Who are these people who stay up all hours of the night?”  All hours of the night meaning anything after 9:00pm.  She would be amazed by the new technology that surrounds us and makes even the most trivial aspects of our life easier.  I don’t imagine, however, that she would ever give up the list post on her refrigerator.