Thinking About Hurricane Season and Rebuilding Together

The beginning of September always brings with it a flood of memories and anxieties, frankly. 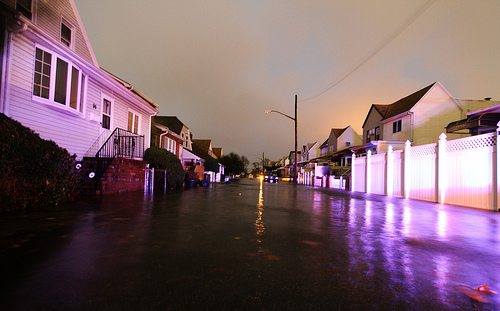 As a child, Hurricane Season in New York City wasn’t something to which we paid that much attention. I remember schools being closed during Hurricane Gloria.  But, she skipped New York City.

By college, Hurricane Andrew 0f 1992 was very memorable.  Not because it hit New York (it didn’t), but because it’s path had crossed with the homes of some of my college buddies from Florida.  They came back to college in the North East having endured a Category 5 hurricane.  My world and cares were expanding beyond New York City.

Over the past two years, New York City has prepared itself for Hurricane Irene and seen first hand the devastation of Hurricane Sandy (some like to call it Super Storm Sandy, but to me that moniker underplays the devastation she left in her wake). I saw some of it first hand in the days following.

Unfortunately, I think this is our new normal in the North East.  I think we should be prepared for annual super storms and hurricanes to hit our coast.

Since Hurricane Andrew, I  have often wondered how the residents of the Caribbean and the southeastern states mentally prepare and steel themselves for Hurricane Season.  But if there was one lesson I learned back during Hurricane Katrina was how the American public rallies around others and how the internet is an effective tool in connecting those who want to help to the resources that allow them to do so.  The comfort I reach for now is knowing for sure that if and when a hurricane strikes our area again, there are many many people who want to help.

When my friends from around the country learned of the desperate need for supplies in hard-hit areas of NYC like the Rockaways, Coney Island and Staten Island, I was inundated with messages to ask where they could send supplies.

I discovered in the aftermath of Hurricane Sandy so many wonderful organizations that were able to coordinate the many volunteers who wanted to help.  One such group is Rebuilding Together. It’s a non-profit group that for the past 25 years has been helping communities throughout the US with critical repairs post-devastation. 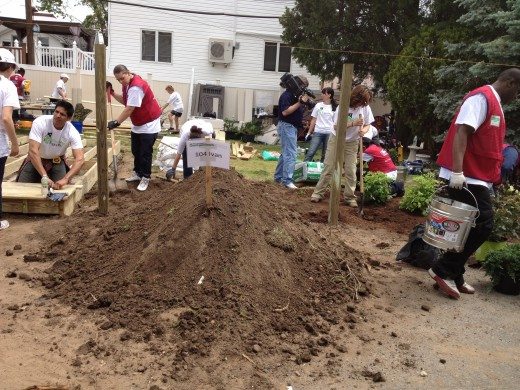 I was fortunate enough to be a guest of Parents Magazine at Meredith Corporation’s annual Rebuilding Together volunteer day in Gerritsen Beach. Along with 499 other volunteers, I visited the small Brooklyn seaside community where 75% of the homes were unexpectedly flooded during Hurricane Sandy. In team groups, we all worked furiously to help as much as we could that day. I was assigned to help paint and restore Kidde Beach which is the small neighborhood beach where Gerritsen community– especially the kids and families– gather during summer nights and hang out. 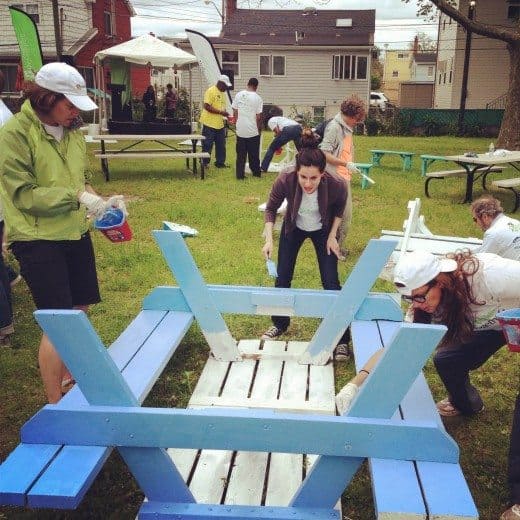 We hammered and painted as furiously as we could.  Together we wanted to make a huge impact that day. I left with sore arms, but even though we couldn’t accomplish and restore everything, I was comforted to know that Meredith Corporation and Rebuilding Together would be in Gerritsen finishing up restoring homes and Kidde Beach as long as necessary. 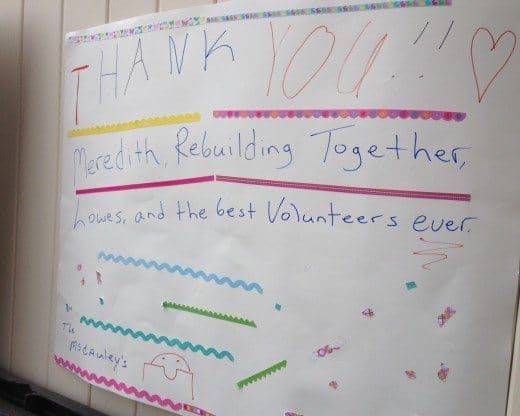 Hurricanes and the devastation they leave behind suck.  But the Americans who rise to the occasion and help?  They are awesome and a source of help and comfort to others afterwards. Knowing that fellow Americans want and do help , well, that  is a huge comfort to me.   Especially, now that it’s September again.