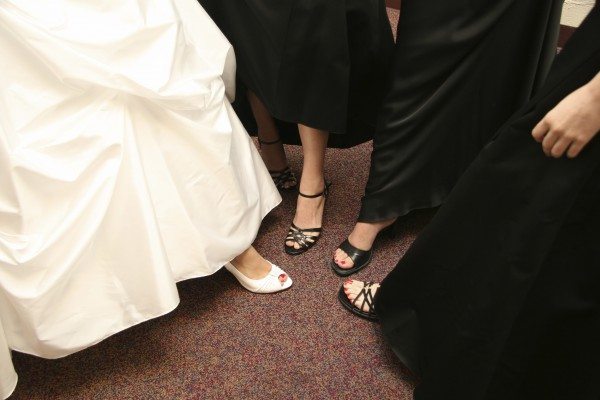 The Case of the Uncredited Shower Contribution

I helped give a bridal shower, but I don’t think the bride knows!

I am one of three bridesmaids for my brother-in-law’s fiancée.  The other two bridesmaids and I agreed to give the bride-to-be a bridal shower together, meaning that we would all help plan, prepare, and pay for the party.  But because I live out-of-town, the other two girls handled most of the planning.  The most I could do was send them a check for my portion – $100, a third of our $300 budget (which I thought was steep, but paid anyway).

I sacrificed going to my uncle’s wedding AND I drove for two days with a newborn to get to the bridal shower.  It was a great party and definitely worth the trip.  The other two girls did a great job.

HOWEVER, when we were cleaning up after the party, one of the other bridesmaids pulled me aside and said that they went a bit over budget and would need me to send another $50.  I said sure, no problem, and asked her to e-mail me her address so I could mail her a check when I got home.

When I got home, he e-mail said that she actually needed $150 more.  I had misheard her at the party.  I begrudgingly sent the check, but don’t you think that $750 is a bit much for a bridal shower?!  And how could the other bridesmaids go so far over budget without consulting me, and yet still expect me to pay extra?  They sprang this on my AFTER the money had been spent.

On top of all of this, the Thank You note that I received from the bride thanked me for the gift and for driving so far for the occasion. It did not mention my contribution (even if it was only financial) to the bridal shower.  I’m afraid that she must think that the shower was thrown only by the other two girls because they were there to do the planning and preparation.

I feel like my contribution – which ended up being 150% more than I wanted to contribute in the first place – has gone unappreciated. What can I do to modestly let my soon-to-be sister-in-law know that I helped plan and pay for her bridal shower?  I don’t want recognition for my ego – I just want her to know that I care for her as much as the other two girls!

I’ve now let this email simmer in the queue for awhile now, because every time I think about my answer, I decide that maybe I’m cranky or overtired or need another cup of coffee that day. So I mark it as unread again and wander off to choose another question. I’ve now done this enough times that I guess…well, I’m not cranky. I’m just particularly on your side here.

Well, that’s not entirely true. I think, if the other bridesmaids did purposely mislead the bride to think you had nothing to do with the shower, that that’s totally gross and unfair, but I see no evidence in your email that would really suggest that. Did the invitations like, include their names but not yours? Were they the only ones to play hostess at the party (leading games, organizing food, helping gifts, thanking guests for coming)? That could definitely lead to an incorrect assumption on the bride’s part, and I’ll get to how you might correct that in a minute.

Where you lose me, admittedly, is…well, everything else. You say you don’t want recognition for your ego, but because you want the bride to know you “care” as much as the other girls, but the rest of your email is one big long bitch session over money and inconvenience. You admit that you didn’t help with the planning, and thus removed yourself from the budgeting or (lack of) budgeting or from being the voice of reason about a $750 bridal shower. Should they have given you a heads up before the costs skyrocketed? Yeah, sure, though it’s likely that they didn’t even tally everything up until the end, or maybe they  tossed the original plan out the window and asked you for more money since they DID do all the planning and heavy lifting and such. Again, not particularly cool, but that’s not the bride’s fault. This is all kind of hindsight, I guess: don’t let these women plan parties on your dime.

Then you say “What can I do to modestly let my soon-to-be sister-in-law know that I helped plan and pay for her bridal shower?” But you didn’t plan it. You helped pay for it, albeit begrudgingly. I understand wanting the bride to know that you played SOME PART in planning the shower — I do, I really do! — but there’s just too much Other Stuff going on in your email that makes me feel like you want something from the bride that she’s not obligated to give you — it basically reads like you’re asking how to get credit for paying for something that you didn’t want to pay that much for in the first place and didn’t think it was worth it and are just sooooo put out and inconvenienced.

The bride should NEVER know how much her bridal shower cost, or how the to-do list was divvied up, or how irritated you are at her other bridesmaids.  If you want to be irritated at the other bridesmaids for going over budget, that’s one thing. Be irritated. You can definitely be irritated to a point, and use this as a Learning Moment in regards to footing the bill for events you aren’t super-involved in. But leave your future sister-in-law out of that!

If she did make an incorrect assumption — not realizing that two maids did the planning but all three of you contributed money — promise me you’ll leave all the behind-the-scenes annoyance at the door before bringing this up with anybody. And I would bring it up thusly:

1) Ask one of the other bridesmaids something simple like, “hey, does Bridesy know that we all contributed? Because I wasn’t able to be so involved with the planning/hosting I guess I’m a little paranoid that she thinks I flaked on her or didn’t do my part!”

2) Say something to the bride, like, “hey, I just wanted to make sure you enjoyed your shower, since I didn’t get to talk to you as much as I’d like that day, but I had a great time and I’m so happy the three of us were able to throw the party for you.” Don’t give crass specifics like, “they planned but I PAID” or imply that you felt slighted by her note or who did what and how much and when. And then DROP IT. Maybe she will be all, “oh I didn’t REALIZE, I’m so SORRY” and send you a revised thank-you note. More likely, though, she’ll simply assert that yes, she had a great time and wasn’t that cake delicious? Still: DROP IT. You set the record straight, but no fishing for more recognition and compliments, you know?

And I’m sorry this answer comes across as hard on you, because I get that you probably just wanted to give the background details and ended up venting maybe more than you meant. Wanting credit where credit is due is not a terrible thing — I just to make sure you get your motives and sense of tact are in the right place before accidentally turning this into Bridalshowergate 2010, and that everybody makes it to the wedding with feelings intact.

(Oh. And I probably wouldn’t let the other two bridesmaids plan the bachelorette party by themselves. Just FYI.)