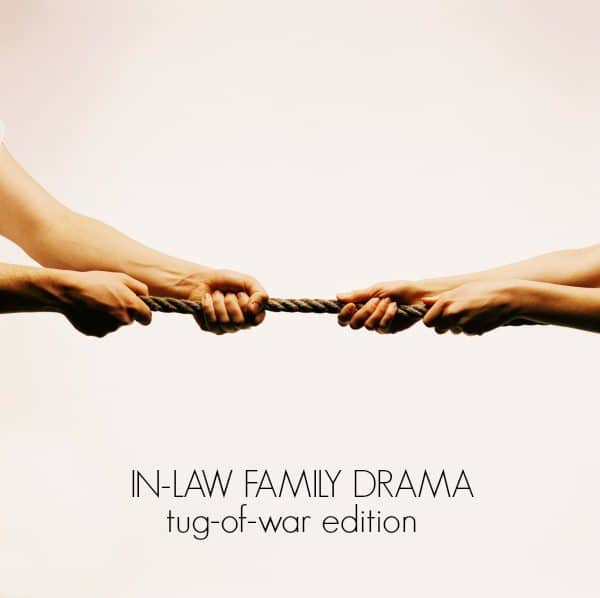 The In-Law Tug of War, Continued

I read your response to The In-Law Tug of War recently and I’m hoping you can help me on a related subject. My son and daughter-in-law have been married for four years and they have an 8 month old son – our first beautiful grandbaby! We have a very good relationship – get along really well…have fun together! My husband and I live very close to them (literally around the corner) and her family lives about a three hour drive away. Our two families are very similar – we are blessed that there is much love to share.

The quality time we get to spend with my son’s family is pretty much limited to the weekends – because of the distance for her family and because my husband and I work full time. Because of our close proximity my husband and I are very conscious to not constantly drop-by uninvited. I know young couples need and deserve their space. My daughter-in-law is the social planner in their home.

What I need help with is that they are so very inequitable when it comes to family time. They literally spend three times the amount of time with her family as they do with ours – even though we live around the corner! I am not exaggerating even a little. Here are a couple of examples: over the past seven weekends they have spent five with her family and the other two with their friends – we were invited over one afternoon but her family was there also. I host a family pool party every summer, and knowing their weekends book up fast, I asked them in early May what weekend they would be available. They told me that every weekend of the summer was booked until late August! Most of those weekends were plans with her family. They have missed several of our family’s important family gatherings (80th birthday parties for great-grandparents), something that my daughter-in-law would not even think of missing if it were her family. They make plans with her family regularly, but only when I reach out are plans made with ours (and when I do…9 out of 10 times they are already booked). I could go on and on.

I have talked with them on three separate occasions about my concern – asking for the family time to be more equally divided between her family and ours. Our extended family (also in close proximity) rarely sees our grandson. I’ve even asked my son to represent and be the advocate for our side of the family. I’ve had both emotional and unemotional conversations with my daughter-in-law about it…asking to be more frequently worked into the family time rotation. They tell me they understand and they will try to be better, but so far not much has changed at all. I understand that my daughter-in-law is very close to her mother & family and I’m happy about that…but I am just as close to my son and in the area of family time he allows her to call the shots (especially since their son was born). So yes, I blame my daughter-in-law for this issue. We are very hurt over this and not sure what else to do.

I do not like the fact that I am now oversensitive on the subject and even becoming resentful. I even find myself  “keeping score” and I’m sure this is not healthy for our relationship. Any advice would be greatly appreciated.

I get a lot of in-law related questions, as you’ve probably noticed. This is one of the first ones, however, written from “the other side.” Daughters-in-law of the world, unite and read. And then stare down at your toes in shame for a little bit, if any of these details seem familiar. (Or roll your eyes so hard you sprain something, if having the “problem” of a close-by MIL who respects your boundaries, goes out of her way to accommodate your schedule and just wants to spend time with your baby sounds like a dreamy dream from dreamland, because IF ONLY.)

I wish I had a sure-fire solution to your dilemma, OP. I wish I could hand you the password and secret handshake to the Good Daughter-in-Law Club or at least a sample script that will get your point across in a non-passive-aggressive, non-blamey way that will get immediate results. But it sounds like even if I could do that, your son and daughter-in-law will nod and smile and say yes, yes, they understand and then change absolutely nothing.

Personally, their life sounds downright EXHAUSTING to me. Making a three-hour drive practically every single weekend? For months and months on end? I get being close to your family but wow. I might be overreaching here but…how would you say your DIL is adjusting to motherhood, overall? Did she have a difficult pregnancy, birth, postpartum experience that you know of? Just because going home to Mom (or having Mom visit) five weekends out of seven — not to mention committing to six hours in the car with a small baby! — does indeed strike me as a tad excessive for a young, otherwise independent couple. (We live three hours away from both of our families and even the one-two both-sides visit punch that we can pack while there isn’t enough to tempt us to make the trip more than five times in a damn year, because it’s a lot to take on with young kids.)

I know it’s awful that I’m all suspicious of a close mother/daughter relationship, but hey, you wrote the letter and she didn’t. Let the wild speculation commence! When you see her with her mom, would you say it’s a nice friendly relaxed sort of relationship or is your DIL maybe a bit too dependent on her mom’s help and input for everything baby related? Do they both retreat to change diapers or do things “together” that really only require one person, or does your DIL simply cede the primary caretaking role to her mother altogether when she’s around?

Even further wild speculation: Does your son really enjoy hanging with his wife’s family every single blessed weekend? I wonder if your conversations with him went nowhere because this is already a sore spot in their marriage. She makes the plans and steamrolls him into going along with them, and then hearing it from YOU just feels like a pile-on/reminder that 1) he doesn’t really get a say in any of this, and 2) his wife would much rather be with “her” family rather than his. Or with him! (BOOM.)

Sure, it could also be that there’s some reason they don’t want to hang with you guys but also don’t have the guts to say it to you, even when confronted directly about the visit disparity. I suspect you’ve already started to wander down this road of paranoia and resentment, and probably know that it’s a very bad, ugly place to be. You mention getting invited over when her parents are there so it sounds like you all get along — any big cultural/social/personality differences? One side drinks and the other side abstains? Super religious vs. curse-like-a-sailor heathens? Politics, bad Facebook behavior, a church wedding that resembled the two sides of the aisles in My Big Fat Greek Wedding?

Or the other, other possibility is that your DIL is a clueless, pushy dolt who doesn’t give a crap about your feelings, or at least not enough to have her change her precious weekend plans. And your son just doesn’t want to deal with it because he’s got a long, established track record of Not Dealing With It that’s working for him. If that’s the case, then you probably aren’t going to change them. And like I’ve said to countless DILs who aren’t going to change their MILs, you’re going to have to focus on the changes you can make to YOU.

DON’T keep score. Don’t count. Don’t start seeing us vs. them sides every time you look at last month’s calendar. It’s hard, but it’s only going to damage the relationship even more and make it SUPER difficult to bite your tongue around her. Thus upping the odds that you’ll say something you regret. (Hi! I have done this. Believe me, however sweet it might feel to just let that snarky, biting opinion out for once is NOT WORTH the bitter, awkward aftertaste of realizing that You Should Have Not Said That.)

I know you really want family togetherness (and for them to choose TEAM MIL), but since you’re getting angry and resentful at her anyway, how about just focusing on grandbaby time for now? (Think back to high school and your mom asking you why do you even WANT to be friends with those mean girls anyway?) Will they let you babysit? Have him over after work during the week for a little bit? Take him to your house for breakfast while they pack and load up the car for Visit #2404582?

He might be a little young for all that right now, but as he gets older YOU’LL be the grandparents with the real opportunity to be a big part of his life. (Provided you don’t, you know, pick a huge fight with them over missing the summer pool party of 2013.) You’ll be the ones who can always be there for preschool graduations and soccer games and whatnot. You’ll be the school emergency contact and be the ones who get called on in a pinch. You’ll know his friends in the neighborhood and keep an eye on him out the front window while he learns to ride a bike. Your proximity will, at some point, give you all kinds of advantages over her family. Mmmm, justice!

Maybe your DIL realizes that and is just crazy overcompensating for it right now. She might be so overly determined that her son bonds with HER family that it really hasn’t sunk in that you’re there, feeling downright shunned from just around the corner. I hope it does, and I hope you can keep the (one-sided) peace here. It takes two to play tug-of-war, and I’d suggest letting go and taking the pacifist, baby-centric route before things get really ugly.