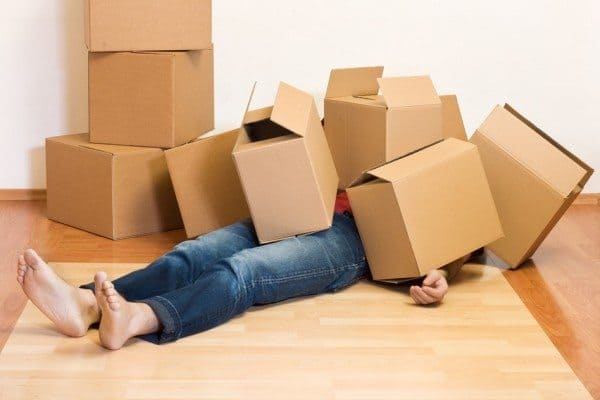 My husband and I have two kids, ages 2 and 4 months. Next month we’re moving an hour away to be closer to his parents and his job. Since you’re about to be going through the same thing I thought you might have some insight into how to go about this process.

I’m all about planning and working diligently over the next month to pack things up we don’t use much and organize so that when the day comes all we really need to do is load up our stuff and go. My 2 year old is having a ball helping me pack a box a day and is super excited to go to his new house with a playground in the backyard. And really, the kids take up a lot of time so if I leave packing to the last minute we’ll be way in over our heads.

I’m having some disagreements with my husband over the best way to go about the move. Hubby is taking a more loosey goosey, go-with-the-flow approach. As in, I’ll pack the week before no don’t box up my winter shoes I’ll do it myself approach. He even had to be talked into renting a U-Haul truck so that we’d only have to take one trip. He and his dad thought it would be ok to use a smaller borrowed trailer and take as many trips over as many days and weekends as we needed.

Last night when talking about the aforementioned shoes packing, I got upset with him. I told him that I wasn’t going to spend whole days and nights watching the kids while he packed at the last minute. I don’t think he’s grasping how stressful it will be to have the kids in limbo for an unknown length of time. I want to load our stuff once, unload it once, and work on getting everything in order so the kids (and us!) are settled as quickly as possible.

He eventually relented to letting me box up the shoes. No word yet on if I can tackle anything else that is his but for now I’ll be content to do mine and the kids’ things. (I stay at home so really I’m happy to do it so it makes life easier.)

Husband has already mentioned that my planning when we move stresses him out. I think I come across as frazzled and excitable when this happens but it makes me feel better and helps me sleep at night knowing that I’m chipping away at the mountain of work ahead of me in a detailed way.

So my question is: how do I go about helping my husband let go a little in this moving process. He works full time with an hour long commute, and takes care of the finances and the yard work on over an acre of land. He NEEDS me to take charge in this process but I think living with boxes around for a month and not being able to organize it all himself makes him crazy.

Thanks for all your help!
Up in Limbo

(Lots of moving questions rolling in. I wonder why, because over on my blog I am pretty sure I’ve only demonstrated that I am a HOT MESS and should NOT BE CONSULTED about anything moving related unless it’s how to likewise be a HOT MESS.)

So you and your husband sound super similar to me and my husband! Are you us? Are you wearing us like skinsuits? Because my husband also had it in his head at some point that we were going to handle the entire move by ourselves. Even though he has a bad back and I am a puny weakling and we have approximately 11,000 pounds of stuff in our home. (And that’s NOT an exaggeration. That came from an estimate from a professional packing and moving company, who I FINALLY managed to convince my husband to contact because DUDE. DUUUUUUUDE. Our move out and into the new house has to happen on the same day, and that day is hurtling towards us rapidly.)

So you guys have different approaches to this, and you’re clashing because 1) duh, moving is stressy-stress stressful, and 2) your different approaches are each making the OTHER PERSON more stressed out, ouroboros style. The more he insists that his last-minute, DIY approach is the right one, the more you panic because you’re convinced that your planning-to-plan, let’s get stuff done ahead of time approach is better. He thinks you’re control freaking/micromanaging, you think he’s being an idiot, there’s so much to do plus kids for the love of God let me pack up some crap for you already!

What we need here is a good old-fashioned compromise. While he’s at work, you run things at home. You pack things, including his things. You are capable of knowing what not to pack (stuff he needs over the next few weeks), and will label anything you pack appropriately for easy location just in case. By allowing you to do this, he will also solve the problem of you “stressing him out” because the more you chip away at the packing process, the better/calmer you will feel. (HELLO I AM YOU. I KNOW HOW THIS STUFF WORKS.)

When he’s at home, you will refrain from nagging/bugging. Channel the frazzled/excited energy into the hours when he’s not there, and try to make sure you guys are having conversations about things OTHER than the move. It can get all-encompassing, I know. But the rest of life is happening around it, and needs attention and love as well.

As for the actual move itself, I gotta admit if we could have done the several-small-trips-over-a-few-weekends, we would have. Definitely cheaper, although yeah, it prolongs the period of feeling unsettled. I don’t think it’s The Worst Thing, though, especially given how young your kids are. They’ll be okay, since it’s more about you guys being there and remaining a constant than whether or not you moved the dining table out already. That might be your area of compromise, with an agreement to revisit the idea of a One And Done truck rental if it seems to be stressing the kids out too much. (And promise that it really will be about the kids, and not you.)

But take heart! Eventually even my super stubborn husband woke up to our reality: We have to do it in one day, we HAVE to hire movers for our furniture, and honestly, we probably need to shell out some money to have packers come the day before to pack all the crap we won’t have time to get to. Yeah, it sucks. I’d rather use that money on new furniture or something! But having the packers as a last-minute fallback means I won’t drive us both insane by trying to pack up ALL THE THINGS RIGHT NOW YOU PACK TOO DO IT DO IT while my husband procrastinates, and also I can cut myself a break on having the entire move/packing process on my shoulders while trying to work and care for the kids.

Take a deep breath. Compromise fairly and calmly. And tell him that some person on the Internet gave you permission to pack up his stuff while he’s at work, because come on, man.