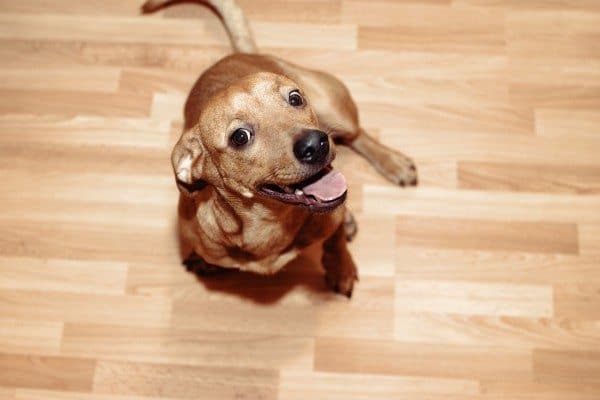 I have enjoyed reading your blog for several years now, and most recently the zero to forty pregnancy column (we are expecting our first in May – a little boy)! Like you, we have a little dog. Actually, we have two of them. Ceiba’s antics are so funny to read about because our dogs do many of the same things, the least enjoyable being the pee pee accidents on our expensive rugs. I know these “accidents” will increase when the little one arrives because the dogs are used to being the center of attention. Most likely on the new rug in the baby’s room. So my question to you is: what is your tried and true remedy to clean your rugs? I have tried many products on the market over the years and have not been impressed with any one in particular. I had our rugs professional cleaned last year, but that’s too expensive to do all the time. Help!

Number of rugs we currently own: Zero, plus brand spanking-new laminate in the basement

I wish I could help you. I really, really wish I could. But this is a war I’m embarrassed to admit that WE HAVE LOST. No matter what we did — more house-breaking efforts, more training and books, more baby gates and barricades, more scrubbing and shampooing — our beloved, stupid, pain-in-the-freaking-butt dog would eventually seek out our rugs and pee on them. About half of time the accidents were weather-related. She’s an obnoxious little princess who doesn’t like peeing outside in the rain or wet or snow, but is also incredibly prone to straight-up Revenge Peeing whenever she’s annoyed at us. (LIKE FOR HAVING BABIES, FOR EXAMPLE.)

Because of said babies, I was always incredibly mindful of just what kind of cleaning product I felt comfortable using on the rugs and carpet. The super-strong heavy-duty varieties worried me too much to use on areas where my babies spent so much of their time. But I wasn’t happy having them rolling and crawling around on rugs with obviously set-in urine stains, either! We did like Nature’s Miracle, and made up our own formulas using baking soda, vinegar and water. Both worked fairly well, provided you caught the stain while it was new and still wet. I had a hydrogen peroxide/ammonia mixture for heavy duty older stains (when the weather was nice and we could air the rug out for awhile), and I know we eventually got fed up enough to start trying the Big Likely Toxic Guns from the home improvement store, but didn’t think they worked any better. We had the basement carpet professionally cleaned about twice a year using an environmentally friendly firm, which actually wasn’t that expensive (compared to area rug cleaning), but still. STILL.

I just couldn’t stay on top of the stains. I’d miss an accident and discover a foul-smelling dried spot a few weeks later (our dog is tiny, thus so are her puddles, but they still back a terrible punch). I never really found anything that would get these out 110%, especially since my husband and I are both reeeeeeally sensitive to urine/pet smells already. Our basement playroom just…SMELLED SO BAD, and I was embarrassed to have anyone over, much less spend time there with the boys myself. The basement was her preferred bad-weather screw-you-guys spot, even after we installed a baby gate and barricade. (She’s got laser-radar-spider sense for that gate being left open for even a minute, I swear.) And she did indeed seem to seek out the rug in the nursery for ABSOLUTELY NO GOOD REASON, even on nice days when she had plenty of opportunities to do her business elsewhere. And the more accidents she had on a particular rug or spot, the more likely she was to return to that rug or spot and have another one, probably because we were never able to completely remove the odor of the old stains.

In short, the whole situation was making me stabby with rage…towards my dog. Who…I’m aware the problem is not entirely her fault. We obviously screwed up her training somewhere along the way. I admit that she gets let out in the backyard vs. getting taken for a walk more often, especially now that we have the kids and crazy schedules. I fully accept my role in this particular disaster. But oh my hell, I was threatening to turn her into a very small mitten on a daily basis, and I meant it at least once a week.

So we gave up. Bare hardwood floors may not be the most cushy or inviting or seem ideal for babies and toddlers, but DAMN, they are so easy to clean. And Ceiba will only have an accident on them as a very, very necessary, easily-avoided last resort, because again: Obnoxious spoiled brat who likes to pee on dry absorbent things. We rolled up the rugs and dragged the worst of them out to the curb, and stored the rest for Someday Later Maybe.

I bought some awesome FLOR tiles for the kids’ rooms, thinking they’d be easier to peel up and clean or replace as needed. This was true to a point, but alas, I went with light colors that were stained beyond repair within a year and a half. Okay, they’re cheap compared to an area rug, but not that cheap. They’re gone now, and nobody’s injured themselves on the bare floor yet (knock on hardwoods). And we finally plunked down the money to rip up the offensive basement carpet and put down a laminate floor. I’d LOVE to get some more FLOR tiles for padding and color, but unless someone in the comments comes up with a suggestion that I haven’t tried and swears it’s the best! thing! ever!…I will probably not bother, unless I see a noted lack of indoor-accidents from Ceiba for an extended period of time and feel like she’s broken the bad habits.

In the meantime, I’ve just used blankets on the floor for tummy time and the like, and only opted for MACHINE WASHABLE play mats and gyms (because oh yes, she’s revenge-peed on those too, multiple times). I actually plan to splurge on a Wozzy Softspot for baby #3 — it’s a portable water-resistant, antibacterial play mat that you can use plain or buy washable slipcovers for. That way we’ll have a soft rug-like place for the baby to play…that I can also fold up and put away when we’re not there to supervise, or wash/wipe down should that sneaky-yet-dim-witted monster manage to get her butt on it.

Seriously: We just had the laminate floor installed in the basement this week. The construction noises and general STRANGER IN MAH HOUSE hullabaloo, coupled with the fact that I’m sure she knows she’s losing her preferred revenge-pee spot, is presumably what led to me discover a pair of pee-filled Chuck Taylor sneakers in the corner of my absolutely-rug-free bedroom. Touche, hamsterdog. TOUCHE.