Twitter Facebook Pin It Email Article
Prev The Skincare Report Next Showering at Night, Bedhead in the Morning 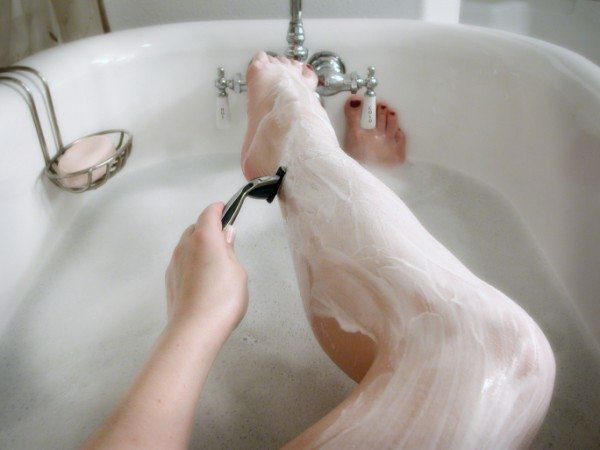 Getting back to a very serious topic: can we talk about hair removal systems? Specifically razors? I was at the local Costco with my sister the other day and she was buying more razors than I would think anyone would ever need in a lifetime. When I mocked her she said, “with three shaving girls in our house we go through a lot of razors.” Which made me think – how often are you supposed to replace your razor blades in your trusty shower tool? Am I not doing it often enough? Sure I don’t wait until its rusty, but I don’t have a written schedule of every two weeks, but maybe I should? Any insight?

While we’re on the subject, are more blades really better? Any science to the subject? Am I wasting my time with the razor and I should really just move on to creams/waxes/lasers?

Happy Friday, everyone! It’s been a really, really long week. I hope y’all can forgive me for hiding from the Very Serious Big Deal Brainhurty Questions you’ve sent in and picking this one instead. We’ll tackle bigger problems next week, promise.

So! Razors. Ugh. How complicated they’ve gotten lately. Between razors (and the accompanying shaving creams/gels/foams/lotions) and the deodorant aisle, you could realistically spend about two hours of your life contemplating all your options.

For starters, my razor of choice is a MacGuyvered hybrid: I use a Gillette Venus HANDLE, but not the blades. I use my husband’s Gillette Mach 3 blades. (They’re compatible, yes.) Why? Well, I like the Venus handle design — it’s definitely been made with the whole leg-and-armpit-shaving angles in mind, as opposed to the stick-straight styles of Olde. I rarely nick myself with the curvier handle, even though I always assumed that was more of the fault of the blades, or my shaving technique.

But I cannot STAND the Venus blades. Or any of the girl-y blades with the lotion strips or whatever those are. You still need a separate shaving cream or gel, and it seemed to me the strips accomplished little more than prematurely gumming up and dulling the blades. So I went through them faster and spent more money. (Also don’t get me started on the fact that each refill cartridge is INDIVIDUALLY packaged in a wee plastic pod, like a fancy Keurig coffee thing. So stupidly wasteful.) I like a nice, straightforward three-blade razor head that pivots. I have no idea how many blades some of the other razors are up to these days (five? six? 42?), but I like three. It’s probably a matter of personal preference — I have never come across anything of the non-marketing/advertising variety that definitively “proves” that more blades are better, or that even just one or two blades are woefully insufficient.

Basically: Are you happy with your razor, be it a jumbo bag of pink Daisy razors or something fancier? Awesome. Go with it. If you’re not, I’d recommend giving the men’s Mach 3 a try, especially if you already own a different Gillette handle.

Now onto the “how often should you replace your razor blade” question. That ALSO depends. It depends on how often you shave, how large of an area you’re shaving, and your body hair type. Thick and coarse and curly hair that grows super fast? You’re gonna be changing your blade a lot more than someone who is shaving fine peach-fuzz hair off every other day. (My leg hair is super-fine, but my bikini area is…uh, not. And will wreck a blade much faster.)

So there’s no set timeline! You’re probably doing just fine. You definitely want to pitch any blade that’s rusted IMMEDIATELY, or any blade that feels like it’s “tugging” on the hair instead of gliding smoothly across your skin. If you’re using a not-so-fresh blade and notice nicks or rashes or razor-burn bumps, toss it. That’s the dullness, and no amount of shaving cream is going to help it.

(Sidebar! For shaving creams, I use Alba Botanica Moisturizing Foam Shave. For super-sensitive/dry-skin types, Jason highly recommends Avalon Organics Moisturizing Cream Shave [Unscented]. I’ve used it as well and agree that it is uh-mazing, but since I’m shaving a much larger area than just a face, I go through too much of it, too quickly. [It’s quite thick and concentrated.] But if you’re really sensitive and haven’t found anything gentle or moisturizing enough, try it! It’s like shaving with creamy butter lotion.)

Since those little disposable suckers are expensive, however, I definitely try to use them as many times as humanly possible. To help prevent premature rusting/dullness, make sure you REALLY rinse them well after use — get them completely clear of hair and shaving cream residue. Shake off excess water, then let them air dry, preferably upright. Use one of those wall-hang-y things instead of setting your razor down in a puddle on a shelf or soap dish.

I’ve tried the creams (can’t stomach the ingredients anymore) and the waxes (can’t seem to commit to the process long-term and always revert back to shaving and tweezing). And I have approximately seventeen million other things I’d rather spend my money on than laser hair removal. (Though again, I am not dealing with the level of coarse, dark all-over hair that some of y’all have, so NO JUDGMENT for anyone who simplifies her life through lasers.) I have no first-hand experience with the at-home permanent hair removal gadgets (anyone?) like this $500 thingamajig from Sephora (update: it has since gone down in price a bit), though I have been SORELY TEMPTED to buy this shower-friendly brow-and-bikini kit from Bliss on several occasions.

Sharing time! How often do you change your razor? If you even remember. Which I kind of don’t. And also, does anyone have any advice on how to stop missing the SAME TWO PLACES on the back of my ankle and the one part of my kneecap EVERY TIME I SHAVE? What in the world, self. You look like a hairy patchwork quilt.