Twitter Facebook Pin It Email Article
Prev Bedhead: Is it OK to Sleep With Wet Hair ? Next What to Wear: Fancy Restaurant Openings
Beauty & Style

Well. Whew! What a week last week was, with all the not-updating I did.
However, a true advice columnist never rests and never stops bossing people around, and last week was no exception. I went to New York to meet up with AlphaMom’s own Isabel Kallman and was promptly dragged — dragged! — into the nearest Sephora to help her find an under-eye brightener and concealer. Oh, the horrors and rigors of my life.
To prepare for our excursion, Isabel made sure to get two whole hours of sleep the night before. So we had some serious dark circles to deal with. 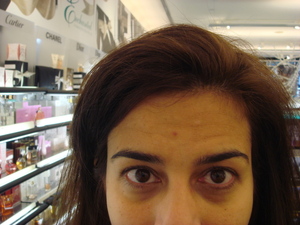 She also brought her makeup along so we could really see the concealers in action, layered under her Sue Devitt 70% Triple Seaweed Gel foundation and enhanced by her CARGO SuedeBlush. 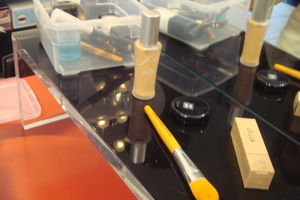 (As an aside, here, let me tell you how tickled I was to see that Isabel has put her money where her columnist is and uses and loves almost all Advice Smackdown Approved products. The only one she admitted to not being super in love with was the Bourjois Coup de Theatre mascara, to which I was all, “Oh, THAT old thing? So over that too. I’m all about Tarte Lights, Camera, Lashes these days. Should I have mentioned that?”)
Sephora must have heard we were coming, because they thoughtfully rounded-up all their best-selling concealers and eye treatments for a single display at the very front of the store. We decided to try one per eye, for as long as Isabel could stand applying and re-applying the gunk.
My jobs were identifying the proper color shade, taking pictures and…uh…standing there, trying to look knowledgeable about things.
Like everything else, concealer needs to match your skin tone pretty closely, erring on the lighter side if you’re stuck between two shades. 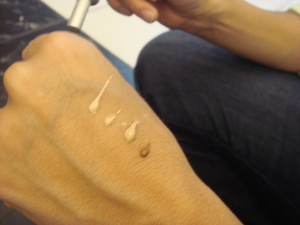 (Second one from the top is the winner of this batch of Stila shades, for example.)

Shade issues were at play with both of these concealers — Amazing Cosmetics Amazing Concealer and LORAC Undercover Lover. The Amazing Cosmetics concealer comes in tons of shades, but only a few were available to test. This one is far too light, but beyond that, we didn’t really see much about it to justify the $40 price tag. It went on thick and makeup-y and sunk into every crease.
The LORAC concealer comes in three shades, and Isabel’s skin was smack dab in between two of them. We went with the lighter shade and agreed it was far too noticeable.
Next up were the Stila Perfecting Concealer and Benefit Boi-ing. (As soon as we saw the Boi-ing we both exclaimed, “Sundry!“) 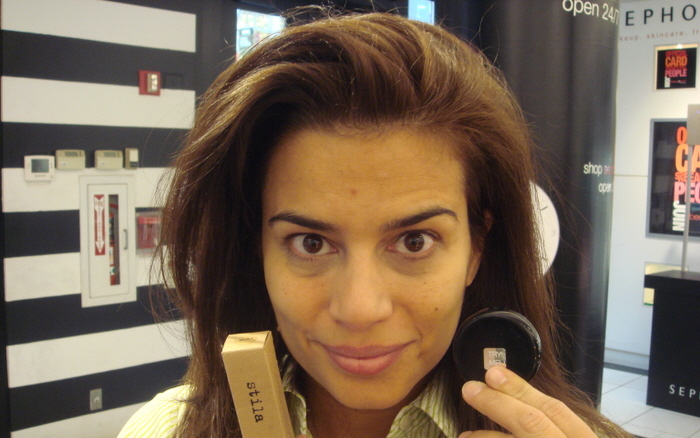 Now, I’m posting this photo but I’m not happy about it, because it really doesn’t capture how well the Boi-ing concealer actually works. In real life, in the harsh store lighting, there was a very noticeable difference between these two, which was even more apparent once Isabel put her foundation on. She didn’t have the same application complaints as Linda, but like all of these things, there’s a personal preference aspect. (I love NARS lip lacquer pots and find that I can put gloss on blindly if I use my finger; most people prefer using a wand. I can’t use a slant-tip gloss to save my life; other people are not so mentally challenged.) If you’re more of a finger-dabber when it comes to eye creams and makeup, the Boi-ing is pretty easy to use and provides really full coverage.
However, I will echo Linda’s assessment that a really good moisturizer is essential if you want to avoid creases. Isabel’s dark circles are pretty severe, and when she admitted she doesn’t currently use an eye cream I did possibly choke on my tongue a little bit. So we were off to find an illuminating eye cream to layer underneath the Boi-ing.
About a month ago I bought Philosophy’s Dark Circles eye cream for Jason, who also suffers from the perma-bags. We’ve both used it and both been underwhelmed. Blah. Y’all know I love Philosophy’s Hope in a Tube eye cream and think it does a fab job firming up fine lines, but for dark circles, look elsewhere.
Isabel’s skin was starting to protest a little bit, so I only subjected her to two more products — a mini Price Tag Cage Match between Cosmedicine’s not-cheap Opti-mologist Eye Cream with Light Diffusers ($40) and N.V. Perricone’s hella-expensive Advanced Eye Area Therapy ($95). Obviously, one application of an eye treatment isn’t going to immediately display all the benefits, but you know what? At these prices I don’t think a little on-the-spot improvement is too much to ask. 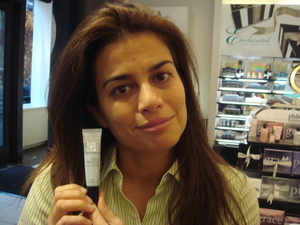 Perricone = big fat nothing. Cosmedicine = a nice little something. I don’t know what, exactly, “light diffusers” are supposed to be, but Isabel’s skin did look immediately a little brighter and a little less puffy. I sensed that layering it under the Boi-ing would be the winning combination.
We couldn’t resist trying one more thing — Benefit’s Eye Bright pencil. I’ve been dying to try one of these white or light pink pencil things — you dab it in the inner corner of your eye and blend, with the idea of concealing that dark bluish area by your nose and supposedly making your eyes look bigger and brighter. 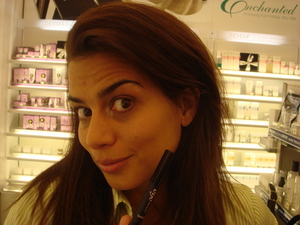 I think I might still give one a try, but if you’ve got a dark or olive complexion like Isabel’s, I don’t think these are worth bothering with. Even after she blended it in, it still mostly looked like she’d colored on her eye with a white crayon or something.
Before: 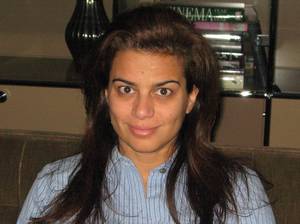 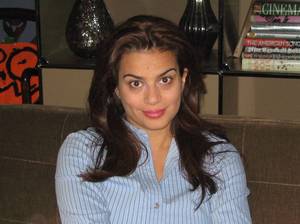 Not sure we can officially declare a complete and total victory, but I think the camera flash is a big part of the problem.
In the end, like most cosmetics, there’s a limit to what concealer can do, which is probably why there are SO MANY on the market and yet new ones constantly being formulated and trumpeted as “finally! a concealer that WORKS!” Consistently getting enough sleep, staying hydrated, laying off the hooch and salt…you know, the boring stuff you don’t really want to do…are your best defenses against the under-eye shiners.
Although if you’ve got a good friend to hit Sephora with you the next day, go ahead and stay up late, drink wine and eat potato chips.