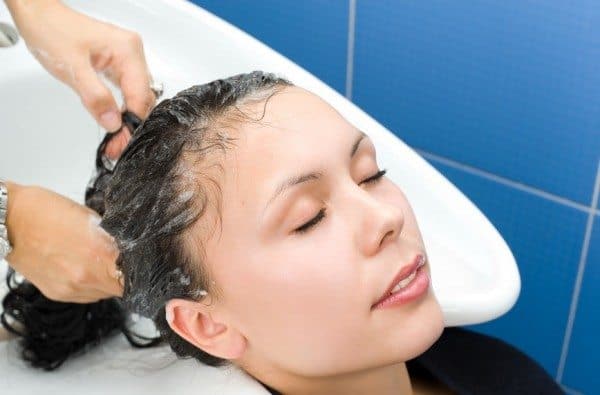 I discovered your pregnancy calendar when I was pregnant with my daughter, and I’ve been hooked ever since. I’m hoping you can help me with a hair issue.

I have naturally brown hair, and started getting blond highlights a few months ago. This isn’t my first time getting highlights, but it had been a couple of years since I had them, so my hair was pretty healthy going in.

Now my hair is fried. Not just run-of-the-mill post-highlight dry hair, but straight-up straw. Like, seriously, I could be a stunt double for a scarecrow.

Ok, that was a slight exaggeration, because not all of my hair is fried, but there are pieces throughout that are truly straw like and that have lost about 2 inches of length due to breakage. To make matters worse, my hair is already fairly short, so I don’t really have the option of cutting off the damaged portions. I have an above the shoulder bob, so to cut any more I’d basically have to be bald.

I talked to my colorist about this (this was the third time she has highlighted my hair) and all she said was that I should deep condition. I am deep conditioning once a week, using Pureology shampoo and conditioner, and I only wash my hair about 3x per week, although I do use dry shampoo between washes. I also rarely blow dry, and flatiron on a medium setting (any lower isn’t effective). Skipping the flatiron isn’t really an option, because my hair is very frizzy if not heat styled, and I need to look professional for work. I do use a heat protecting spray before flat ironing.

The thing is, I know that this damage is from the color, not my styling habits (although I’m sure the heat isn’t helping) and I also know that this isn’t normal for highlighted hair. I mean, I know that some damage is normal, but I’ve gotten my hair highlighted off and on since I was in my early 20s and I’ve never had this degree of damage. So my question is 2 parted: first, what else can I do to treat my hair? And also, should I switch colorists? I really like my colorist, but I kinda think she should have offered to do a deep conditioning treatment or something. Maybe my expectations are out of line? If you or your readers can help, I would be greatly appreciated!

Signed,
Everything is better deep fried, except hair!

HAAAAAAIR! Oh wow, it’s been awhile since we talked about hair. But it’s summer and it’s unbearably hot and some of the questions lined up in the queue right now are all unbearably heavy and serious.

So yes, it sounds like the highlights caused the damage. Highlights are permanent hair color, with lots of ammonia, so even perfectly mixed and executed highlights have the potential to damage your hair over time. But not usually to the degree you’re describing. And for it to happen all at once, after one specific coloring session, suggests (to me) that your colorist mixed them incorrectly or left the dye on too long. And then didn’t want to admit her mistake and tried to deflect blame on your styling habits. (Which sound just fine. Not perfect, but totally real-world fine.)

But there is another possibility: Your hair is different now than it was in your 20s, thanks to hormonal/pregnancy changes, and simply isn’t cut out for regular highlights anymore.

In my early 30s, I switched from getting permanent blond highlights to a semi-permanent (ammonia free), single process red color. Partly because I was bored and wanted a dramatic change, but also because the highlights were killing my fine, thin hair. I’d been pregnant two times by then, and had been coloring my hair on and off since 16 years old when my natural color went from blond to the color of a used dishrag. I don’t know if the damage was increasing due to time, age or hormones. Or all of the above. The semi-perm color actually adds some thickness and moisture to my hair, and as long as I don’t slack on the occasional deep conditioning treatment, things stay pretty healthy and shiny. Relatively speaking, anyway. My fine, breakable hair has never been and never will be all Breck-Girl fantastic, but hey. We all do our best with what we have, right?

(Also, yeah, anyone who follows my blog or Instagram: I switched back to blond highlights a couple weeks ago. Absolutely hated them. Went back this weekend and got the semi-perm red put back over them and feel like myself again. I’m so ridiculous.)

So I don’t know where the blame fully lies here — I’ve never had a post-highlights reaction as bad as the one you’re describing, so I am DEEPLY SUSPICIOUS that your colorist did something wrong. On the other hand, who the hell knows with hair and hormones and all that jazz. At the very least, I TOTALLY agree that you should have been offered a complimentary conditioning treatment. So maybe start shopping around for someone new, if you want. I’d recommend finding someone who specializes in color correction, who could maybe do some semi-permanent trickery for a few months while your hair recovers. (Obviously you do not want to put more permanent dye on your hair right now, but I know living with fried hair AND growing-out highlights and roots probably isn’t a combination you’re jazzed about.)

But now for the important part: WHAT TO DO NOW. OMG. HOW TO FIX.

Yes, the heat styling isn’t helping, but I get that it’s one of those things most of us just have to do. I’ve always believed that flat irons are much more damaging than blow-drying your hair straight, though I guess that’s debatable. Science?  Heat is heat, but blow-drying your hair correctly (round brush, roots to tip, constant steady downward air a few inches away) seems gentler than subjecting the entire length directly to a hot iron. Maybe try practicing your blow dry technique and see if you can tame the frizz that way. Or switch your heat protecting spray for a serum or cream that will penetrate and coat a little better.

Now we need to talk deep conditioning. You mention Pureology so I assume you’re talking about one of their hair masques/treatments when it comes to your once-a-week deep conditioning. (If I’m wrong and you’re just leaving a regular conditioner on for longer than usual, that probably isn’t enough.) I’ve tried Pureology, L’Oreal and LUSH hair masques and they are quite nice and leave my hair super soft. BUT when it comes to “repairing” severely damaged hair, I think they tend to overpromise and underdeliver. Sometimes hair just can’t be repaired, no matter how much money you throw at it. The masques will nourish the new growth, however, and hopefully speed up the dreaded growing-out process.

If you don’t have one of those masques I mentioned already, I still wouldn’t recommend you rush out and buy one. A classic VO5 Hot Oil therapy will cost about a fraction of the price of the fancy salon versions and work just about as well. But you honestly don’t even need to get that! Go to the grocery store and hit up the cooking oil section. Coconut oil is DIVINE for dry, breaking hair. It solidifies in the bottle so I just nuke it for a couple seconds until it’s warm and spreadable, but not fully melted. Then I coat my ends with it. (My roots are crazy oily so they get none of the fun stuff. ) You can also warm up a little olive oil and mix in a mashed avocado until it’s a paste-like texture. Leave on for 5, 10 or 15 minutes and rinse out. Do this a couple times a week and you should see some improvement. (Aim for three times, since we’re talking major issues here. But I know you probably don’t have that kind of life and time. So promise me you’ll do it AT LEAST once a week.)

In the meantime, even though losing length isn’t an option for you, make sure you go in for regular trims. Get rid of the damage as often as possible, even just a quarter-inch at a time. Even the completely fried ends will look worlds better after a quick trim, and you’ll expose slightly healthier hair each time, especially if you’re religious about the oil treatments or deep conditioning masque.