Twitter Facebook Pin It Email Article
Prev The Salon Trap: Is My Stylist Ripping Me Off? Next Get This Actual, Real-World Look: For Blue Eyes Only
Products & Services 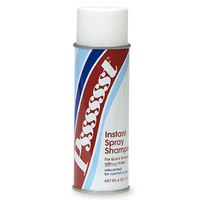 Flashback Friday is an occasional feature where I test out products I used ages and ages ago to see if they are as good (or as bad!) as I remember.
I should start this one off by admitting that I never used before, but I distinctly remember my older sisters having it around and using it before they went out on dates and such, usually right before they yelled at me to get the hell out of their room, like, moooooooooooom she’s bugging me again.
The idea behind Psssssst is simple: it’s essentially talc in a aerosol can that absorbs the extra oil that can build up in your hair throughout the day. It’s not really shampoo, but more like a freshener.
For someone with hair like mine, it sounds like a freaking lifesaver, especially in the summer. My roots can get pretty oily, and I routinely brush cornstarch or baby powder through them to stay presentable. And I absolutely MUST shampoo every morning. Trust me, I’ve tried going every other day and oh my lands. So bad. Psssssst sounded like a great alternative to the messy whiteness of powder…and maybe powerful enough to use on those mornings when I’m not able to shower first thing but would still like to not look like a greasy mess if the UPS guy shows up.
It took me awhile to track it down (mostly because I couldn’t remember how many sssss to type for a decent web search) (six!). I knew it was still available, but it’s no longer advertised and nobody else seems to remember it. But I finally found some on a bottom shelf of a CVS and almost died when I saw the packaging. It’s still exactly the same! It’s all 1970s and stuff! My hair looks more Marcia Brady-like already.
It’s also ridiculously cheap — around $5. Why don’t we hear anything about Psssssst anymore? It’s the bargain of the century!
Oh. Because it sucks. That could be it.
A few reasons why Psssssst dashed my little dreamy dreams:
1) The smell. It claims to be unscented, but there’s a definite odor. (One of the ingredients listed IS fragrance, so I don’t understand why they label it as unscented.) I couldn’t quite put my finger on what it smelled like until I read a user review at that likened it to the way your dog smells after coming home from the groomer. Yes, that is it. And no, thank you.
2) The look. I don’t know why, but I was expecting it to at least be a LITTLE different than talc or baby powder. But that’s pretty much what it is, and it’s just as white and gives my hair the same greyish/ashy color. I’d actually say it’s WORSE than using cornstarch, which at least blends in after I brush it in. If you’ve got dark hair, don’t even think about this stuff. It’s granny-hair in a can.
3) The feel. My hair feels extremely dry afterwards. The ends (even if I take care to only spray my roots) feel like straw. And after a few minutes, my scalp starts to itch. Then my neck and shoulders itch. An awful, burny-type itching. So…I’m guessing I’m allergic to something in it. (And with ingredients like “Isobutane, SD Alcohol 40, Aluminum Starch Octenyl Succinate, Propane, Cyclomethicone, Fragrance,” take your pick of what it could be.)
4) The very-quickly-running-out-ness. I have the same complaint about Psssssst as I do about Bumble & Bumble’s (insanely overpriced) Hair Powder. You have to use a lot more than you think, and thus the can runs out (or it simply clogs and malfunctions) really, really quickly. I like a lot of things about — the tinted shades, the oomph-y volume — but I simply cannot spend close to $20 on a 1 oz can that gives you maybe four or five applications. Obviously at $5, Psssssst isn’t quite the brazen insult to your wallet, but still. A freaking bottle of cornstarch will last you years, not days.
5) AND OH YEAH. THE WHOLE NOT-WORKING THING. Seriously, I just didn’t see much of a difference. As soon as I start brushing it though, the oil in my roots reappears. Forget about looking presentable in the mornings pre-shower. Psssssst isn’t nearly strong enough. As for freshening up mid-day or before going out at night, it still only does an OK job. I actually think my hair started to overcompensate for the dryness (this could be tied into the allergy, for all I know) and has been producing extra oil since I’ve been testing out Psssssst. No, thank you, again.
I don’t think I need to go on for you to get the picture. (And no, there will be no pictures documenting the oil slick on my poor, irritated scalp. You’re just going to have to take my word for it.)