Twitter Facebook Pin It Email Article
Prev Postpartum Hair Regrowth of Weirdness Next The Advice Smackdown Is Back! So Let’s Talk Deodorant 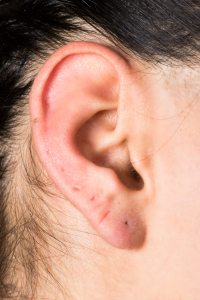 Not a child related question, but I highly suspect you would be the perfect person to ask. Having come of age when this was trendy, have several ear piercings in my earlobes, three in my left, two in my right. I actually used to have four and three, but I let one close in each a few years ago. Those holes, which were very tiny, get filled with muck I have to squeeze out every so often. Pretty gross.

So my problem is that I feel like it no longer looks good to have all of these earrings in my ears. I wear small round silver posts in all of them most of the time. Sometimes I put other earrings in the first holes. I feel like keeping them makes me look like someone who was in high school in the 1990s. (Which I was!) However, what if this comes back in style? Then I’ll wish I still had them! And what about the dreaded tiny holes filled with muck!

Anyway. Should I keep the piercings, or let them close?

Oh hey! We have the same earlobes! I too, was your typical product of the 1990s who regularly enjoyed jabbing holes in my ears. I believe I also topped out at four and three, but these days I really only have two holes (on each side) that I can actually get jewelry into. I had my original bottom piercing redone a few years ago because the holes were really, really low on the lobe and I could never shake my paranoia over how easily a grabby baby or toddler hand could rip them out.

At the time, the piercer looked at the top third holes and said he could probably work an earring in without needing to repierce if I wanted. I can’t even remember the last time I wore a third earring, but it had to be at least a decade, if not longer. So if you’re concerned about later regretting letting the holes close, take comfort in the fact that you can probably get them back without much trouble. (Note that this was a professional body piercer at a reputable tattoo parlor, NOT some random person with a punch gun at the mall. VERY IMPORTANT DISTINCTION.)  I declined, mostly because I’m already way too lazy to put earrings in at all and didn’t want the hassle of inserting yet another stud.

As for the gunk forming in the holes, this is usually just a simple hygiene issue. Holes take a LONG time to heal, so it’s normal for holes you’ve let “close up” to be prone to dead skin build-up as the scar tissue forms. (Like I said, my top holes still weren’t fully closed a damn decade after I abandoned them.) Massage your earlobes with a gentle, fragrance-free soap in the shower, and occasional swab them with a Q-tip dipped in rubbing alcohol, witch hazel, or saline. If it’s happening to holes you still wear earrings in, that’s typically just a sign you need to clean your earrings more often. Soak your earrings in a little rubbing alcohol every once in awhile. Note that if there’s any pain, bad odor/color or swelling, that’s a sign of a more serious irritation or infection. Your jewelry might contain a metal you’re allergic to (nickel, for example) or is the wrong gauge for the hole. (As someone who has pierced several other areas on her body over the past few years, believe me when I tell you that the proper gauge makes a huge difference no matter what body part you’re dealing with.) If you do decide to keep your piercings, you might want to visit a professional piercer for more advice, and possibly have them open the tinier holes up a bit more. (They can do it pretty painlessly with a taper.)

You do you, momma.

It’s funny, though: Just last night we attended an event at a local brewery in a super cool hipster-y neighborhood with a super cool hipster-y crowd and now that I think about it, there were a ton of women with multiple ear piercings there. And many of these women were at least a decade younger than us, so perhaps the multi-pierced look is coming back in style? (For the record I was wearing zero earrings, because lazy. I had a nose ring in but that doesn’t count because I so rarely change that one out.) I saw plenty of loaded-up lobes and cool cartilage piercings, as well as plenty of women like me who just couldn’t be bothered.

So I really don’t think you’re criminally unhip with your little rows of studs, but for real: All that matters is whether YOU like them and enjoy the look of them. You’ve had them long enough, so I don’t see anything wrong with you deciding that they’re just part of you now and that you want to keep them. OR with deciding that you’re ready for a change and want to ditch them. Just remove the worries about outsider judgment or age perception from the decision, you know? Because it’s super irrelevant.  Refuse to listen to anyone who makes sweeping judgments about what’s “appropriate” for women (or “moms”) our “age” when it comes to things like body piercings or hair color or clothing choices. You do you, momma. Pierce some stuff. Get some tattoos. Dye your hair purple, shave your head, bust out the Doc Martens or a miniskirt or a bikini or WHATEVER YOU WANT. Go grocery shopping in a Snuggie, for all anybody should care.