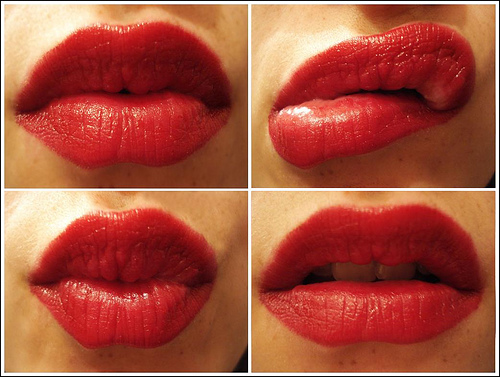 Photo by K√° .
Hi Amy,
The salon I go to is selling lip gloss that promises to ‘plump’ your lips up. I don’t want to look like Lisa Rinna, but a little fullness applied topically would be nice.
I did a little internet research and it looks like these plumping glosses contain some skin irritant which causes your lips to have something of an allergic reaction to it and thus swell up a bit.
I’m willing to put that on my lips once in a while, but would like to know what you think. Would you use such a product? Have you? Do they work – like can you tell a difference?
Thanks!
Not Plump
Yep, I’ve used them. DuWop Lip Venom, to be exact, which I *think* was one of the first of the plumping glosses, or at least the first one to hit the big-time and get a big push at Sephora. Now there are a million versions, or so, but all based on the same idea. Irritate the lips with ingredients like cinnamon or ginger oil, capsaicin (like from chili peppers) or a number of complicated-sounding chemicals that I frankly don’t feel like attempting to spell.
Others will claim to plump your lips with ingredients that “stimulate collagen production” (riiiiight), while others claim to do it with super-ultra-moisturizing ingredients that pull moisture towards them, making your lips puff up temporarily with excess water. You’ll usually see something in the ingredient list like hydrophilic-something-or-other for this kind of gloss, though make no mistake — it’s still a chemical causing a chemical reaction, despite the comforting use of the word “moisturizing.”
Am I saying these things are “bad” or “dangerous”? No. Not at all. For most people, they’re perfectly harmless. I kind of regard them in the same masochistic beauty category as those nose strips we were all so bonkers for once. Not really the BEST approach to the problem, but hey! Cool! Look at all crap I just temporarily ripped out of my pores! If you have an actual allergy to any of the ingredients beyond a surface sensitivity, that would be Bad, of course. And if you have sensitive skin, you’re likely to end up with a ring of red, irritated skin around your lips after a few uses. And then there is this!
But still. Lip plumpers are what they are. Bee-stung lips via allergen/chemical-stung lips, I guess. Do they WORK? Yeah…I…guess? Shrug? I bought one tube once and lost it after awhile and never really felt compelled to replace it? The plumping effect was rather underwhelming? (There’s a fine line between “subtle” and “why bother?”, if you know what I mean.) And while I signed up for temporary plumping, a half hour to an hour later you couldn’t see ANY difference, and if I reapplied the gloss too often the “slight stinging sensation” became downright annoying, bordering on painful.
It was fun, I suppose, for a little while — kind of like my past brief obsessions with false eyelashes and Manic Panic and body glitter. I tried a few others at Sephora but never again plunked down money for one. I have pretty thin lips, but just found the results to be so…meh.
If you’re curious about your salon’s offering, by all means ask for a tester. I would not buy any of these without trying them, because of the irritation factor. I mean, they’re DESIGNED to irritate your lips, so it’s just a smart idea to get a sense of what level of irritation you’re talking about. If you’re pleased with the results (i.e. there’s any kind of noticeable difference that lasts for more than 15 minutes without searing hot pain), buy it! Have fun with it. You certainly won’t get a trout-pout from these products (unless you’re really allergic, yikes), but you also probably won’t look like Angelina Jolie, either.