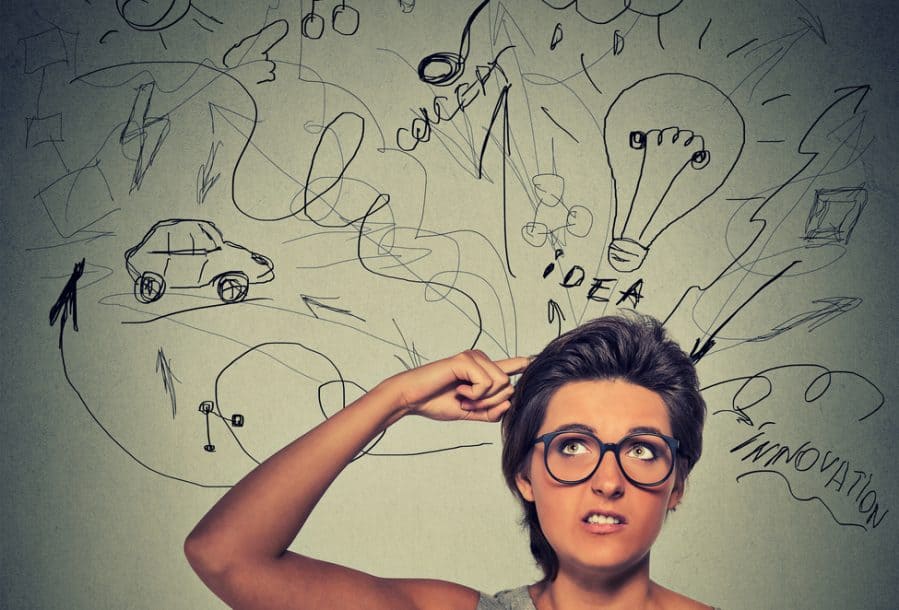 ADHD in Middle Age: Hi, What Were We Talking About?

I am currently 45 years old, and am—by most (all?) conventional measures—a productive and successful human being. I hold both Bachelors and Masters degrees. I run my own business from a home office, and have for the last dozen+ years. Other than the mortgage, I am fortunate enough to be living debt-free. One of my children is arguably a successful adult (I’m not sure I agree that 18 is an adult, but okay) and the other is a successful near-adult. And—not to brag, or anything—but my dogs think I’m pretty terrific.

Yes, I’ve experienced some unpleasant times in my life. (Haven’t we all?) I’ve had setbacks and challenges and I’ve made more mistakes than I care to remember, of course. But overall, I’d say I’ve been scoring at least an 8 on a 10-point scale of Adulting.

Last month, I was diagnosed with ADHD. At 45. The stuff you read and/or hear about adult ADHD diagnoses would lead you to believe this only happens to people who’ve been a mess their entire lives. My life should be a shambles of job-hopping, missed payments, broken relationships, and deep feelings of inadequacy. Well… I’ve got that last one, at least. Yay?

So let’s back up, a minute. Let’s go back to a few years ago, during the long odyssey of my oldest child wading through a variety of mental health crises, and diagnosis after diagnosis of what was “really” underlying the issues she was having. (See also: mental health is rarely straightforward.) Toward the end of that terrible and confusing time, her therapist suggested testing her for ADHD, which seemed like 1) perhaps the only thing she hadn’t yet been tested for and also 2) sort of ridiculous. She wasn’t hyper! I’d seen her focus on things for hours at a time! I saw no point, but I trusted her therapist, and so we did the testing. Results: Raging ADHD, Inattentive Type. We received an interesting crash course in what Inattentive ADHD really is and is not, including that focusing on items of interest is often not a problem, and also that if you’re pretty smart, you’re probably compensating pretty well, outwardly, but feeling exhausted with the effort of it all.

As my daughter learned more about her limitation and challenges in this way—and we, as a family, learned along with her—I ended up wondering if maybe I had ADHD, too. A lot of what we were dealing with seemed… familiar. Very familiar. I privately beat myself up over all the times I’d either thought or outright accused my kid of being lazy, even as I remembered similar accusations in my youth leaving me feeling misunderstood and/or stupid. I noticed how my sometimes-scattered little apple hadn’t fallen far from the tree with the successful freelancing career being operated from a desk that was about one envelope short of looking like a dumpster tornado. And suddenly my deep devotion to coffee and frequent jokes about how I cannot accomplish anything without it started looking a lot like what the pros refer to as “intuitive self-medicating.” Huh.

I asked my therapist if she thought maybe I have ADHD. When she finally stopped laughing, she said that yes, she thought that was likely. But did I feel like knowing for sure would change anything? Would I be interested in trying meds? I wasn’t, really, so we left it at that. Again, my general level of Proper Adulting was fine. And as someone who already struggles with depression and anxiety, I wasn’t eager to add more chemicals to the mix.

Life went on. Years passed. And then, last year, I started having memory issues. I would forget things to do things. I would lose small items, either overlooking their obvious locations or discovering I’d left them someplace weird for reasons which escaped me. I would repeat myself, and not realize I was doing it. My son started teasing me about my “early onset Alzheimer’s.” My husband started asking me if I was feeling okay. And because I am nothing if not totally logical, after this went on for a few months, I became convinced that something Big And Scary was surely wrong with my brain. I continued pretending everything was fine while privately cataloguing everything I was going to miss after my early demise, then put on my big girl panties and made an appointment with my doctor.

She sent me to another doctor, and he sent me for a brain MRI (all clear!) and then to a third doctor. I had to wait a few months, but eventually I had comprehensive neuropsychological testing which concluded that my memory was actually pretty good for someone my age. On the other hand, my focus and higher-order processing was not. In other words: I have a raging case of ADHD, Inattentive Type. (If you think my apple didn’t enjoy her tree’s comeuppance at this point, you are mistaken.) When I did the whole, “Yes, but, but! I figured I had ADHD but I used to be able to remember stuff!” protestations, I was treated to a brief explanation of how my trajectory is not that uncommon; again, if you’re smart, if you’re motivated, if you’re well-rested, if life is ordinary, you can compensate. Maybe you can compensate for a really long time (say, 45 years). In my particular case, I sort of have to love the irony—I was doing fine until years of extreme stress ended and I found myself… drifting, a little. Maybe I was just finally noticing some issues (previously excused or explained away, due to aforementioned stress), or maybe finally having some room to breathe meant I slipped a bit on my usual death grip on organization. Maybe a little of both. Either way, with the official diagnosis in hand, it was time to decide if I wanted to try medication. And unlike a few years prior, I no longer felt like I had everything under control, so I agreed to try meds. The doctor who did my evaluation also mentioned in passing that he often sees people who are diagnosed late, like me, who have long histories of depression, and once they treat the ADHD, the depression resolves. Hmmmmm.

Right now I am slowly ramping up on a stimulant med and I feel completely different but also not. I don’t feel any of the things I was told to be wary of—I am not jittery or “hyped up” even experiencing any sort of euphoria (I was told some people do feel that). The initial dosage didn’t do anything at all. At the next increment, I felt the same as always… except… if I sat down to do something, I got it done on the first try. I stopped losing things. I stopped finding myself in the middle of a room unable to remember why I was there. At the next dosage bump, I realized I was feeling less anxious (even though anxiety can be a side effect with stimulants) and sleeping better. I finished some work, one day, and realized I felt okay. Calm. If you know me, I doubt this will come as a surprise, but “calm” is not often a word I would use to describe myself.

I started thinking about the trajectory of my life, and all the times I’d changed course or hadn’t, but felt like I was pushing boulders up mountains to keep going. I wondered what it might have been like if I had either realized that yes, things were genuinely harder for me and I wasn’t just dumb or lazy and desperate to hide it, or if I’d had meds back then. I did okay, you understand (and I know that many people do not, so I am grateful I was lucky enough to be able to push through), but I do wonder, a little.

The moral of the story is either that I’m a dummy or that it’s never too late to learn more about yourself. I think it just might be the latter one, and I even suspect it must be true because I can actually remember it, now.