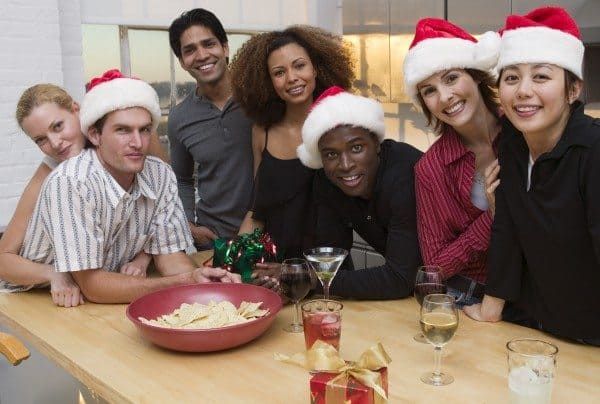 First let me say, you are amazing! Your blog has made me laugh, made me cry, and kept me thoroughly entertained when I should be working for over a year now. I read your 0-40 pregnancy calendar when I was struck with a major case of baby fever last year, and now that I’m officially pregnant (I just found out on Thursday!) I am re-reading it again. Obviously I’m so excited, but it could not have come at a worse time for keeping it under wraps. Being that it’s Christmas time, I have about 5 million holiday party festivities to attend, and anyone who knows me will suspect something is up if there is not a glass of wine in my hand. Do you have any suggestions for how I can hide my pregnancy through the holidays?

Thank you so much, and Merry Christmas to you and your beautiful family (and the little one on the way!).

Ah, yes, the lack-of-cocktail dead giveaway. Always a tricky one, especially when you combine other lubricated, easily-excited party guests who might not hesitate to shriek OMG ARE YOU PREGNANT?? the instant they notice you turning down a glass of bubbly. I admit I don’t have a TON of experience, as I was generally blabbing to the Internet about my pregnancy by six or seven weeks each time, so even if I wasn’t overly thrilled to announce the news to a particular audience at a party, it wasn’t quite the same as blowing some Big Huge Nuclear Launch Code secret if it happened over a glass of sparkling water.

But, the way I see it, you have three basic choices:

You’re on antibiotics. Or trying a new migraine medication. You’re just getting over the stomach flu. You went out the night before and already suffered through one hangover. You’re driving. You just started such-and-such (Zone, South Beach, etc.) diet and the first stage doesn’t allow alcohol. (This one doesn’t tend to work very well BEFORE the holidays, though it’s very believable right after!)

Hold a glass of wine as a decoy, or claim you just keep putting yours down and misplacing it, oh well. Opt for club soda or cranberry juice with a lime wedge in a highball glass — no one will know it’s not a cocktail. If you’re close to the host or hostess and think they can keep the secret, request sparkling juices or even non-alcoholic wines ahead of time (or bring your own and stash it in the kitchen or back bedroom and get your refills on the sly).

Seriously, a sip or two of wine at a party is not the end of the world, or even close to it. Yes, heavy drinking during pregnancy can lead to terrible things, like Fetal Alcohol Syndrome and less-severe-but-still-bad Fetal Alcohol Effect. However, the whole assumption that if heavy drinking is bad, then light-to-moderate drinking (picture about three glasses of wine a week) must be just as bad is flawed and not backed up by science. Here’s a comprehensive, realistic rundown of what we know — and what we DON’T know — about alcohol and pregnancy, and why many of the warnings and pushing of total abstinence stem from it just being easier to tell pregnant women “no” than risk lawsuits or the chance that some pregnant women are too stupid to know that getting wasted on Jager shots a couple times a week is not “moderate drinking.”

In the absence of knowing exactly where the line is (and it is probably even different for every woman’s metabolism), the party line from the surgeon general on down has possibly thrown out common sense, putting the sight of a pregnant woman sipping some Chardonnay with her pasta on par with Cruella Devil clubbing puppies. There are many things that are just as harmful or suspect in excessive amounts — artificial sweeteners, certain fish, high doses of many common ingredients in skin care products, even just regular old SUGAR — but in other cases, we’re certainly not told that ABSTINENCE is the “only” safe answer.

The first trimester is indeed the most critical development time, so extra vigilance about potentially harmful foods and medications is GOOD. (Though plenty of women don’t have the luxury of even KNOWING we’re pregnant at the earliest possible moment, so all three of my pregnancies began with a couple weeks of sushi and raw beef kitfo and regular levels of alcohol consumption, followed by a extended period of freaking out about it, followed by the realization that everything was fiiiine.) Plus, the very idea of a glass of wine might already be turning your stomach, and the actual thing might cause nausea or heartburn.

So please: I’m NOT saying “oh just drink the glass of wine at the parties because isn’t that so much better than people finding out you’re pregnant???” NOT SAYING THAT AT ALL. Lying about an antibiotic for a UTI is a much simpler, less-fraught way of dealing with the holiday party scenario and shutting people up reeeeeal quickly-like. But pregnancy fearmongering is a pet peeve of mine, and it’s hard to me to resist a chance to take a little swipe at it. Enjoy your parties and your pregnancy, with mocktails or otherwise.