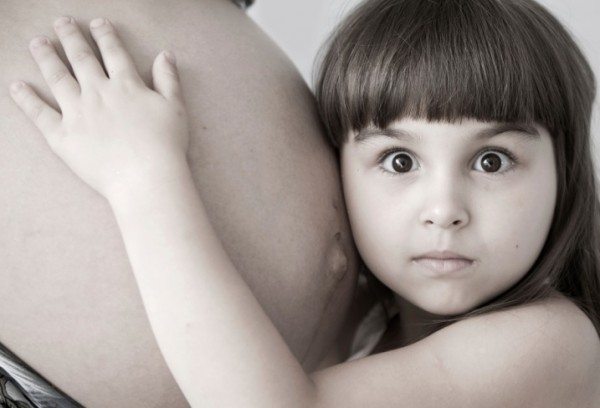 Preparing for a New Sibling

I have been reading your blog/columns ever since we were both pregnant with our first sons in 2005.  (Was looking for another blogger that I could relate to and found your blog somehow.) I’ve been a faithful reader for five years now and love everything you write.

My son Jude is a few months younger than Noah – he’ll be five in November.  In September (just three short months away- AGH!), his baby brother Aidan will be joining us!  Of course, we’re thrilled about this new adventure and have had many discussions with Jude, but I’m starting to worry. For one thing, he was the first grandchild on ALL sides (and I say “all” because my side provides two sets of grandparents thanks to divorce).  You can imagine the magnificent splendor that illuminated the earth when he exited the womb.  To say that these six people are obsessed with him would be an understatement.  And throw in a great-aunt who never had kids and also considers him her own grandchild (complete with weekly visits bestowing wrapped presents) and you’ve got a recipe for . . . well, something interesting.  He’s spoiled, yes.  But he’s also kind, pretty well-disciplined, and a good-natured kid.  He’s sensitive as well.  And relies on routine a lot.  (Cuddle time with Mommy EVERY night at 9:00 p.m. sharp or there will by hysterical weeping and gnashing of teeth.)

I just don’t know how he’s going to respond once the baby is here and I’m less available for him.  And when he sees all his “worshipers” oohing and ahhing over a new little bundle. I’m fully prepared for the fact that it will be a big transition for all of us, but I just . . .I want to make things as easy as possible for him (i.e., not leave him scarred for life).  So . . . I was wondering if there was a really good book out there or a DVD – something – that would help him understand the changes that are about to take place.  I began a search on Amazon, but -it’s such a jungle out there. (haha- pun not intended!)  I figured you might have come across something before Ezra was born.

Thanks so much for any and all advice you can give,
Ginger

Well, for one, good for you for being aware that your child is probably going to maaaaaaybe not be super-thrilled about his brother’s arrival. I admit I was entirely too pollyanna-tra-la-laaaa about the subject, and assumed that Noah was going to be just fine. And he WAS fine. Eventually. I don’t think Ezra’s birth and presence caused him any permanent stress or harm, but oh my God. He was not a happy camper there, for a good chunk of time.

And that was after reading him several “I’m a Big Brother” books every night for months, and showing him new-baby/sibling-themed episodes of his favorite TV shows (Blue’s Clues, Dora, Yo Gabba Gabba, just to name a few). So unfortunately, please don’t rely on these tools alone. They’re good, but really, they’re all pretty much the same. We just marched into the bookstore and grabbed whatever titles they stocked — What Baby Needs from the Sears Children’s Library, I’m a Big Brother by Joanna Cole, Peter’s Chair by Ezra Jack Keats and Mercer Mayer’s The New Baby. These are good books, and it felt good to read them with Noah and ask him questions and at least hope that stuff was sinking in. But it’s probably the rare preschooler who can look at a cartoon family in a book and really make the connection that oh, okay, this is going to be my life at some point in the future. You’ve just got to look beyond the TV and bookshelf too.

1) Get out his baby photos and shoes and clothing.  Show him his baby book — photos of when you were pregnant with him, at the hospital with him, doing all those time-consuming newborn tasks with him. You’re probably getting out a lot of hand-me-downs for the baby and (understandably) don’t want to introduce them to Jude like, “These were yours! And now they’re Aidans’!” But I don’t think it’s a bad idea to pull a few things out that you don’t need to use for the new baby (a special rattle, a toy, a coming-home outfit) and show them to Jude as “his.” Let him get the idea that he was the baby once too and got all the attention and care that the new baby will get, but that he’s absolutely not being replaced. Let him choose whether he wants Aidan to have that rattle or blanket or not. (Don’t react even if he does grab everything and scream NO! MINE!, though if he does say the baby can have such-and-such, praise him for being a good big brother and help him wrap the item as a gift.)

2) Talk to your family members, his worshippers. Suggest that everybody start dialing back on the spoiling — kind of like how they tell you to start preparing your pets for a new baby by restricting their access and time on your lap? Be mindful of adults trying to overcompensate for the coming change by treating Jude to things! and treats! and speshulness! Not only is this just not good for even the best-mannered kid, he’s going to be so extra sensitive once the baby comes and somebody inevitably arrives sans gift, or with just something for the baby. We had great friends and family who were REALLY good about remembering to bring a big-brother gift for Noah whenever they brought something for Ezra, and it was extra special for him because we HAD specifically put the kibosh on random extra gifts-for-no-reason some time before.

(Tangent! This is what everybody tells you to do — bring the older sibling a gift when you give the newborn something. And it’s funny, because Noah would watch me open Ezra’s gifts with interest only until he saw what the gift was. Socks? Onesies? BLANKETS? Are you kidding me with this? And he’d quickly wander away without a twinge of jealousy. So really, I wonder we might be putting a little too much emphasis in general on toys as a sibling-relations strategy.)

3) Arrange special outings with his worshippers after the baby arrives. Have the grandparents and great-aunts and whoever take him to movies or out for pizza or anything his little heart desires. This is a two-fold plan: a) it’ll give you a break and let you focus solely on the new baby for nice chunks of time, and b) it’ll give Jude a much-needed confidence boost to see that his favorite people come to the door JUST FOR HIM, instead of rushing in to ooh and aah over the baby (save that for after the Jude-focused outing).

4) Map out a strategy plan for his routine. So cuddle time with Mommy is a must. Put that on your list of non-negotiable events, and stick to it, for his sake. But scan his routine for things that maybe aren’t quite so important and start wiggling in some flexibility for yourself. For example. it didn’t ever occur to me that Noah absolutely expected me to make his breakfast every morning. As in, if Grandma went to put his waffle in the toaster, he would cry and sob for me. We should have been paying attention to this and had Jason make more breakfasts before school some mornings, just so it wasn’t such a betrayal (in his mind) that Mommy stayed upstairs with the baby while someone else got his breakfast ready. Start throwing him teeny tiny curveballs, especially when it comes to things that you *justknow* are going to be handled by someone else those first weeks and months. And then promise him that the OTHER THINGS, the really important things, like pre-bedtime cuddles or Friday pizza-and-a-DVD nights aren’t going to change for as long you can help it.