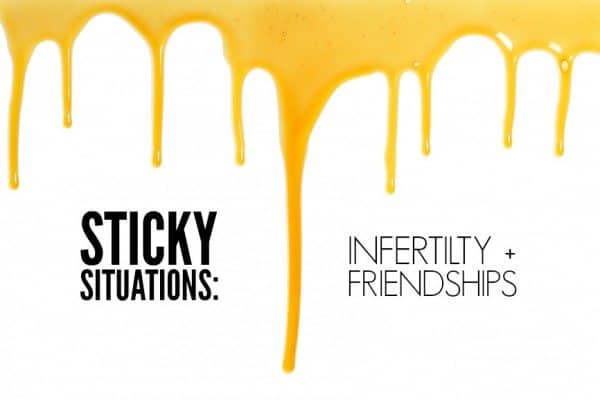 What to Expect (From Your Infertile Friends) When You’re Expecting

I came across your advice board and thought I would reach out and seek your help. I am 4 months pregnant. I have a close group of friends and we all got married around the same time and now, three years later we all have gotten on the baby train. However, one of my friends is having a very difficult time getting pregnant and has gone through some fertility treatments already, with no success. Ever since I announced my pregnancy to her, she has been distant, and it hurts. I know its hard for her because, everyone else around her is getting pregnant. I tried to give her some space first, but then I was worried and missed her. Then I reached out and have been trying to hang out with her and when we talk or see each other it seems fine, but it really isn’t. Finally, last night before parting ways, I called her out. I told her that I felt that she has been distant ever since my announcement and I wondered if I had said or did something wrong by her. I told her I missed her, felt hurt, and like I lost a friend. She denies everything and said, “Oh, no everything is fine.” I also told her that I noticed she seemed completely fine with our other friend’s pregnancy but not with mine. She said she is just going through a lot right now. I told her that I understood, but that I wished she felt like she could talk with me. I am not sure if this can be mended, will it be awkward now when we all get together. I feel like I need to move on, cause worrying about this is not healthy for me or my baby. Is there anything else I should do, or should I just move on. I appreciate any advice you have.

As difficult as it might sound/feel/be, I think you should 1) give your friend more emotional space and time, and 2) try not to take it personally in the meantime.

No, I’m not giving her a free pass on being a “bad friend,” but I do understand what she’s going through right now and can spot a depressive-type defense mechanism from a mile away. It sounds like she’s literally the last non-pregnant person in the group, or at least, the only one having active trouble conceiving and going through treatment. She feels isolated, left behind, and (if I may project my own feelings here for a second) fundamentally “broken” in some way.  No matter how hard she’s trying to be happy for you and all your friends, your growing bellies feel like salt in a wound right now. She’s also likely preparing herself in some way for the next phase of “left-behind-ness,” once the babies are here and friendships get even harder to maintain, particularly with non-parent friends. Which will be her, in her mind, while the rest of you have a built-in playgroup.

And I promise she IS trying. Her reaction to your calling her out is telling. She doesn’t want to open up to you because she’s afraid that her sadness and crushing monthly disappointment really WILL cause you to feel badly and worry. (Very similar to the reassurances you’ll get if you attempt to confront a clinically depressed person, by they way.) So she’s trying to convince you that no, no, no, everything is fine, fine, FINE. Her distance is protecting herself; her denial of said distance is her attempting to protect you.

You mention a sense that she was happier/better with all the other pregnancies, but I don’t know. Were you one of the last ones to announce a pregnancy? If so, it just could be a “straw that broke the camel’s back” sort of thing. She just got increasingly overwhelmed and has shut down, or maybe she’s full-on depressed about it in a way she wasn’t before. Maybe she was actively going through the fertility treatments before and felt more optimistic. Now that they’ve failed she’s feeling worse. (Not to mention that hormonal fertility treatments can do an absolutely BRUTAL number on your emotions and mess with your body for a long time afterwards.) But again, she doesn’t want to talk about it, or burden you with her problems.

You could also ask your fellow pregnant/recently pregnant friends if they noticed a distance/shift in their interactions with her. You might find out that while she put on a happy face for the group, they noticed the same weirdness when they hung out one-on-one.

Does giving her space mean I think you should write her off and dump her as a friend? NO. NOT EVEN. Continue to reach out and care and yes, hang out even though it feels “different.” Just recognize that she’s likely giving you as much as she can right now, so don’t push for more. And again, don’t take it personally. Being a concerned and unconditionally supportive friend — and yes, even a slightly worried friend — is not going to hurt you or your baby. Pregnancy doesn’t give us a free pass to check out of every emotionally fraught or difficult situation, as nice as that might be. Let her know that you love and miss her, and are there for her if she needs you, through thick and thin. If she needs some time, or just needs to check out from the belly bump party, that’s okay too.

I can’t promise that things will suddenly snap back to the “way they were before.” That’s honestly true for ANY friendship after a major life change, be it moving away, getting married, having a baby, having more than one baby, etc. Some friendships adapt and grow with the changes, others get strained, others just flat-out break. But I think you’d regret being the one who broke this one off right now. It’s not like she’s refusing to answer your phone calls and blocked you on Facebook — she’s still talking and hanging out with you, even if she’s not initiating it all that much. Of course it’s going to be different. You have the very thing she wants the most in the world right now, but at least it sounds like she’s TRYING to hide her jealousy and sadness and “be there” for you, even if it feels to you like she’s not really all “there.” It’s still  worth something.

Believe me, I’ve gotten enough letters from women like your friend who really ARE trying to not be bitter, jealous jerks to their pregnant friends while at the same time are throwing internal temper tantrums of IT’S NOT FAIR.  And they all sound a lot like your friend. They don’t want to open up and burden their friends, or they are just plain sick of pregnant friends trying to act “concerned” because it comes off more as “pity.” They put on happy faces at baby showers and then go home and cry for hours. So in this case, I really feel you both, and think this friendship is worth saving…even if you have to put it on a little extra life support for right now.