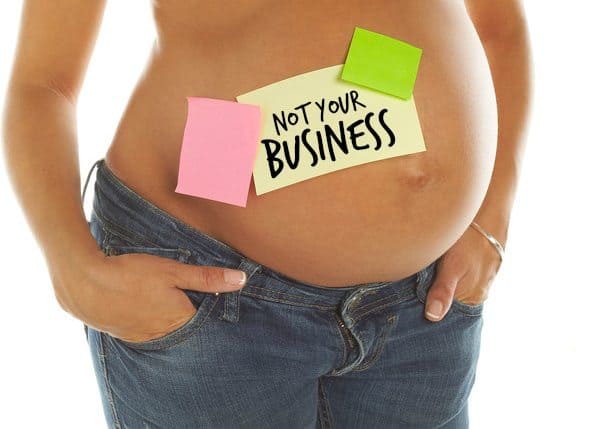 I am sure you have covered this a million times before but who doesn’t love a refresher from time to time. I am 19 weeks pregnant and a first-time-mom (FTM) to be. My husband and I are so pumped for the arrival of our little girl and so are all of our friends and family.

First a little back story: After conversations with my husband, midwife and mom, who just happens to be a doula which is very awesome (and way cheaper), we have decided we want to have a natural birth. We will be taking the Bradley Method Birthing classes and plan to work with my mom as well. I have also been preparing myself that, if it is necessary, I will not fight any medical intervention that needs to be done and will not feel like I have failed in my attempt at a natural birth.

We have been to a few parties over the last few weeks and all the conversations seem to go the same; are you excited?…what names do you have picked out?…are you nervous? After each question I will answer and they seem to accept these answers without any issue. Then apparently the questions become much harder and it’s like calculus all over again; are you going natural or having an epidural? So far it appears I have not answered this question correctly and like calculus I need to go back and study some more. This question has turned into a huge discussion on two separate occasions. One it was with my dear sweet friend who has never had children but has heard stories and “no matter what you say I am going to continue to talk over you and tell you how ridiculous your idea is and it will never happen until you have an epiphany at 11 pm at a party and realize that I was right all along”…those type of run on sentences we all love. The second was with a man, who I would assume has also never had children but his wife has and apparently it was so rough on him that he also would not budge on this decision I have made. In both cases I was talked to as though I have no idea that childbirth will hurt (no way, it does?!) and that if they just push that point home then I will definitely see the error of my ways.

From this, I have two questions:

1. how do I get out of these conversations without it turning into a debate by anyone who is in earshot. I have tried to say as little as possible and just say that’s what I have decided and get out of it and it doesn’t seem to work.

2. how do I handle them if I do have to have an epidural and then have hear about how they told me that it would happen and use it as fuel on the next unsuspecting mom to be who dares try a natural approach?

Thanks!
A hormonal woman with much less patience

I did this a few times, as I was dealing with the complete opposite set of opinions and pressure (we should swap friends!) — my second and third children were born via scheduled c-sections. I got so much crap during my second pregnancy about it (“YOUR DOCTOR IS A QUACK. HERE’S SOME TERRIFYING C-SECTION STATISTICS I’VE TAKEN COMPLETELY OUT OF CONTEXT.”), so I finally just started hedging and dodging the question. Saying wishy-washy things like, “we’re waiting until closer to my due date to see how things go/see how big he is/his position/etc.” Or, “I’d love to try for a VBAC. I do have a date scheduled but we’re leaving it open before that.” (This occasionally backfired, since “VBAC” can also trigger a load of fiery, impassioned opinions about how risky/dangerous THAT is. Oy, my lands.)

But I basically tried to make our decision sound somewhat open-ended or unmade. Then if people got carried away trying to convert me to whatever “side” they were on, I blamed my pregnant bladder and excused myself from the conversation. After a quick bathroom trip, I’d either 1) find someone else at the party/picnic/whatever to talk to, or 2) come back with another topic in mind and launch into a new, topic-changing conversation.

That’s probably the way I’d deal with a dude who thought his wife’s experience was relevant to my own, and that it was okay to even be discussing any plans relating to my vagina in casual conversation. “Wow, I’m sorry your wife had such a rough time. Excuse me, I have to pee.”

As for your “dear sweet friend,” I’d probably be more direct and shut that crap down. (Unless she was drunk or something and not fully aware of how obnoxious she was coming across.) “Dude. Why do you even care about this so much? Knock it off.”

Your birth plans are between you and your care providers. No one else has a Right To Know and it absolutely does not have to be Casual Dinner Party Conversation just because someone ran out of questions to ask the pregnant lady. Clearly, you’ve encountered people who feel — for whatever reason that is their damage, not yours — highly threatened by the idea of natural childbirth. (Much like I met people who watched that one documentary and thus felt like they needed to save me from the evil, uterus-slashing medical establishment.) It’s not your job to educate them, or change their minds. You just keep doing you.

And just because your choice made them uncomfy at a party once does NOT give them the power you’re giving them by asking me question 2. If you decide to get an epidural, again, it’s a choice between YOU and your care providers. If you need medical intervention, you did not fail and you did not give anybody a smug sense of satisfaction. If your “dear sweet friend” really is the sort of person who would say “I TOLD YOU SO” to a newly postpartum woman whose birth didn’t go exactly as planned, then frankly, she doesn’t sound very dear. Or sweet. Or a friend.

You aren’t obligated to answer any question just because you’ve been asked, so practice hedging and being vague while smiling patiently. You aren’t telling anyone the name yet. Your birth plan is still a work in progress. Your birth experience was wonderful and your baby is happy and healthy. Sorry, but you have to pee.