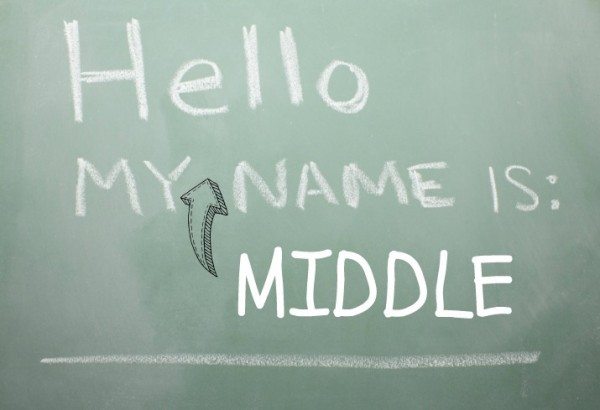 Can You ‘Steal’ a Middle Name?

I don’t know if you’ve received this question before, but I’m curious what your opinion is. Please forgive me if this doesn’t come across as very coherent. I have an almost three-year-old who demands every second of my time belong to her, so it’s hard to concentrate on writing. Anyway…

A little over four years ago my brother’s girlfriend found out she was pregnant and having a girl. My brother had a son from a previous marriage, but this was his first daughter. While deciding on a name, he talked to my sister and told her he was going to give his daughter the same middle name our mother had, which is also my middle name (I believe it was also my great-grandmother’s middle name). My sister told my brother to talk to me because I likely also planned to pass on the same name. My brother “talking to me” consisted of him telling me the name his daughter would have, and telling me that if and when I had a daughter of my own I could use my grandmother’s first name as a middle name. As grateful as I was to have him already naming my, at the time, non-existent child for me, I pretended like that was a great idea and let the conversation slide into the past.

A year later, I found out I was pregnant and having a girl. While deciding on a name, I ignored my brother’s “advice,” and gave my daughter my middle name as her middle name. I had always planned to pass on that name, and my brother giving it to his daughter didn’t change my mind about my plans.

Now, my siblings are actually half siblings, from my mother’s first marriage. They are also more than ten years older than me, and we don’t spend much time together. My daughter will likely spend very, very little time with her cousin. I don’t know how my brother felt about me giving my daughter the same middle name, and, honestly, I don’t care. We’ve never gotten along that well. It is just a middle name after all, and it’s a very popular middle name.

So, this is my question. I know it’s a big deal to not steal first names (or very rude to steal them), but what is the etiquette with middle names? I’ve thought about, “What if my brother and I were close? What if we did plan to have our kids spend a lot of time together?” Is it a big deal to give cousins the same middle name? Obviously, my decision was made a while ago, but I’ve been curious if I broke some cardinal rule or if a rule even exists.

So. Like you, I also have older half-siblings. Six total, as each of my parents’ had three children from a previous marriage. The youngest was nine years old when I was born…the oldest was TWENTY. So. Yeah. I was probably more like an amusing (or annoying, depending) new puppy when I was born than a for-real sibling. I am now relatively close to a couple of them, others not so much, blah dee bleep blah, etc. But I’m actually closer in age to some of my siblings’ children than I am to my actual siblings.

One of my nephews (THE POINT, I AM GETTING TO IT) was born when I was still a pre-teen, and his middle name is Noah. There are no family ties to that name on our side — we’re Irish — but my brother’s wife was Jewish and he converted prior to marrying her, so they chose a middle name to honor that.

Flash-forward many years later, I’m pregnant with a boy and Jason and I are struggling mightily to agree on a name. “Noah” gets floated as a possibility fairly early, but I strike it down because of my nephew. I thought maybe it would be weird. A few months later, I emailed my brother and asked if he had any objections to us naming our son Noah, stressing that I completely understood if he thought it was strange or encroaching or whatever. He immediately responded that not only did he NOT CARE, he was actually touched/flattered that we loved that name so much. We were absolutely free to use it.

So. This story isn’t a direct correlation to yours: The middle name in question is a family name that is also, well, your middle name. And in both cases (your daughter and her cousin), the name stayed as a middle name. And if there’s a particular flavor of inter-family name drama that bores me to tears, it’s spats over middle names. Seriously, unless the middle name is getting used daily as an extension of the first name, WHO CARES. It’ll be years before the kids in question are even consistently aware that they HAVE middle names. (And further: I grew up as Amy Beth, quite possibly the most common combination this side of Amy Elizabeth.) (Which is actually what my parents picked out, then shortened it to Beth because there was another Amy Elizabeth born just hours before me.) Middle names do no warrant the angst they sometimes manage to cause.

But I guess I am wondering why you didn’t give your brother the heads-up that he gave you? Even if you weren’t thrilled with the way he “asked” about the middle name, it wouldn’t have hurt to email/call and say, “So yeah, it turns out my middle name goes really well with our chosen first name and I’ve gotten kind of attached to it since we last talked, so FYI, the cousins are going to share a middle name with each other AND their grandmother and great-grandmother.” Even if he reacted weirdly (which…again, MIDDLE NAMES!), you at least wouldn’t be sitting here three years later wondering if you committed some kind of faux pas or offended him.

Again, you had every right to use the name. I’m not saying you had an OBLIGATION to ask, just that it probably wouldn’t have hurt to reciprocate the name planning talk and let him know that you’d changed your mind about the alternate suggestion he gave you. Perhaps he made the suggestion because he thought you’d be upset that you wouldn’t have a “unique” middle name to give your own hypothetical daughter, not because he necessarily believed that once the name was claimed by him, no one else would ever dare use it.

If he DID believe that, well…that’s kinda silly. But hopefully four years later he’s gained the necessary distance and perspective on middle names. (Namely, that they are not worth fighting over.)

Either way: You mention that you guys aren’t close. It shows, especially in your reluctance to talk to him about this, either before or after the fact. Instead of feeling retroactively defensive or guilty (or whatever) about your daughter’s middle name, maybe see what you can do about bringing the cousins closer together (phone calls, web cam chats, mail, etc.). Two girl cousins, just a little over a year apart? What a nice relationship for them to have! It might not be too late to try again at the sibling relationship either, as I’ve gotten SO much closer to my older half-siblings now that we all have children. What’s the point of bickering over family names if nobody is acting much like a family in the first place? Middle names = not that important. Family relationships = important, and worth salvaging, if possible.