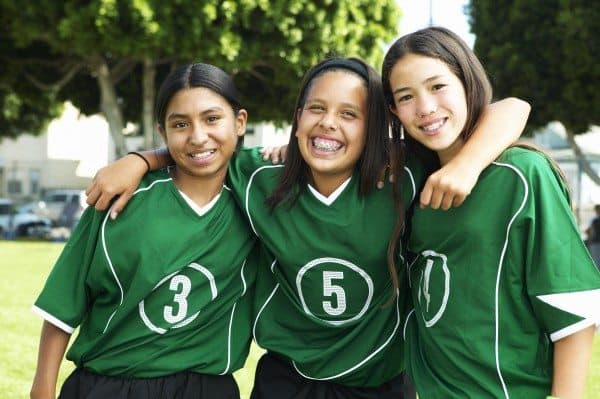 Youth Sports, They’ll Make you Crazy If You Let Them

My kids are athletic. A trait most definitely not inherited from me. I come from a long line of people who prefer not to sweat, exert ourselves, or run– unless we are being chased by an angry knife wielding bear, and even then we may just lie down and hope for the best. Somehow I gave birth to people who love nothing more than being physically active.

So for the past decade or so I have witnessed youth sports first hand. I have seen the good, the bad, and oh-so ugly. My kids have had excellent coaches and they have had horrid coaches. We have had teams filled with parents who are lovely and supportive and those filled with back-stabbing complainers. And you know what? It has been across the board of both winning and losing teams.  I have seen men reliving their youth, or what they wish was their youth.  And I have heard others talking about the scholarships their kid is sure to receive, in ten years when they are old enough to actually attend college.

Here are a few short lessons I have learned.  Take them to heart before you sign your kid up.

2) You cannot predict your child’s future athletic prowess by the way they perform at age 5 or 6. No really, you can’t. In the 12 years that I have been involved in youth sports I cannot tell you the number of kids I have seen who were phenoms in their early years, only to have the playing field rise to meet them a few years later. The reverse is also true. And I’m not even talking about once puberty hits and shakes everything up.  There will be parents who will go on and on about how great their kid is. Just smile, nod, and ignore them.  I always think to myself, if someone has to tell me how great their kid is that probably means it is only visible to them.

3) Don’t take it all so seriously. I had a coach ask me what position my then 5 yr old son played in baseball. No correction, it was t-ball. Position? They just learned to wipe their own butts are they really at an age where they should be locked into a specific position? Frankly watching 5yr olds play a sport is like watching puppies on crack. They all run for the ball and tackle each other to get it.

4) If you have valium take it before any games.

5) Unless you coach, your kid will never play as much as the coaches’ kids. Just accept that. Or you can sign up to be a coach. What, you say you have no knowledge of the sport your child wants to play? Pshaw! In my experience the only qualification that half of the coaches have is the ability to yell really loudly.

6) Your kid is probably not as good as you think he is. Keep it in perspective.

7) I read a statistic once, and I wish I could find the source now, that said less than 1% of all the kids currently playing youth sports will get a college scholarship. That might make you want to rethink the financial strategy of paying up to $1,000 per month on select teams and specialized lessons when you could invest that money and just pay for college.

8) This directly relates to number 4. Don’t be THAT parent. The crazy, screaming one who is coaching their kid from the sidelines and contradicting what the actual coach says. The one who argues calls with the umpire from the stands. The one who shouts disparaging things at the players on the other team. The one who fights with the parents of the players from the opposing team.

9) Let your child play more than one sport. Let them change their mind from year to year. Don’t make them specialize in one sport with the hopes that they will become the best (see #7 above). I remember when I was young that the athletic kids changed sports from season to season, now kids play football, baseball, soccer year round. Has it made them better? More skilled? I think the jury is probably out on that one. But I do know that overuse injuries are significantly higher in children than they ever were twenty years ago. Boys are having surgery to repair elbow damage at 12 years old that has previously only been seen in major league baseball pitchers.

And yet it is easy to get sucked in when you hear about what other parents are doing. It is easy to worry that you are putting your child at a disadvantage. But when thoughts like that invade my head I ask myself honestly, at a disadvantage for what? Winning another dust collecting trophy?

10) It is supposed to be fun.  Cheer for your kid.  Cheer for their team.  Wear the matching shirt/jersey/hat/whatever if it makes you feel good.  But above all, model good sportsmanship.  Maybe less than 1% of kids will get that scholarship, but I fully believe that 100% of them can be good sports.